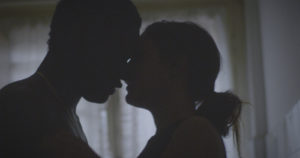 Once, in high school, a guy in the trombone section brought a Playboy to band practice and passed it around the horns section. I was on tympani and could see over their shoulders the airbrushed bodies, the unnatural poses, the phony backdrops.

Even as a hormonal adolescent I could see the images were crass, gaudy in their artificiality. The transgression was more thrilling than its object.

Then I discovered the late-night previews at the upper reaches of the cable channels. At eleven or twelve at night, you could see five, sometimes ten or fifteen minutes of as much as you’d need to satisfy an adolescent curiosity.

Keeping it a secret from my parents was never part of the excitement for me. It was more the bald fact of it. The straightforward presentation of the naked bodies. The license with which the men held and beheld them. The visual rhetoric of physical pleasure.

I was not raised to enjoy myself. My mother, in particular, did not consciously deny us fun, but we did hear the phrase, “children should be seen but not heard” more than once. Fun was something you did off stage, in the child’s world of the basement, the backyard, the park, the forest.

Of course, nowadays the “hip” attitude today is that it’s no big deal to view pornography. Everyone does it. It’s just part of a healthy, free sexuality.

Yet I know, as a man, what my faith teaches me to think about women: they are temples of the Holy Spirit, beloved of God, favored by Christ in his birth and death. They lead armies, they judge the people, they prophesy and worship. They marry and have families. They sin against their bodies, their husbands, and God. They receive grace.

I cannot, on my life, determine what my fragmented culture wants me to think. I am to desire sex all the time, like an animal. I am to freely joke about and share my arousal with others in order to demonstrate my proper idolization of Sex. But at the moment of action I am to suddenly become a rational agent and seek legal consent.

Such sexuality is depersonalized and formal. Expressive, not relational. Egotistical, a contracted self-satisfaction all but debased by the exchange of coin.

I remember the first time I saw a woman’s nude breasts in person. She was my beloved, in the best way I knew to love, and I was in awe. But so, too, was she The Woman, the object, as I had been enculturated, of all my male desire. Her body stood for an experience somehow intimately connected not with herself but with “being a man.”

As Western man — Westernized man, I was trained to relate to my beloved and to her body separately. As a moral and emotional being I relate to her as a person, but her body, paradoxically, stood in for my masculinity, a set of experiences I either did or did not accumulate.

Thanks be to God that my parents raised me in the faith, that with the lights granted them they placed me in the Way of imagining a better world. Christians have plenty of funny ways of teaching their children about sex, but I learned a healthy reverence of it. I learned to associate it not with experience but with intimacy, not the fulfilment of my desire but as creative act of expression in the union of two people.

The first time my wife and I made love we laughed. We were so excited, so happy. It was such a surprise, such a shocking and absurd incongruity from what we’d been led to believe. It was wonderful for all manner of reasons we hadn’t expected.

I had confessed my trials to her, my struggle to avoid destructive images of sexuality. And I feared that I had somehow destroyed my ability to be the kind of man I was supposed to be in bed with my wife.

My only strategy was to give.

To give myself, naked before her. To offer tenderness, a respectful and intimate touch. To provide safety, that she should not fear her nakedness before me. To love her beyond her own insecurities, that though mutually inadequate we might become abundant in each other’s eyes.

Because the lie of pornography and the lesser forms of depersonalized eroticism is that desire is about me, that the object should be judged on its sufficiency to meet my longing.

The lie is that the object is an object, not a person.

And I have no better answer for her than, “Because it is yours.”

Above image by Andrea Benjamin Manenti, used with permission under a Creative Commons License.