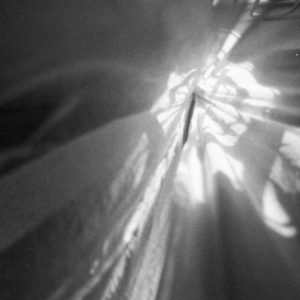 In Dolin’s poem we wake up abruptly inside the walls of an ancient temple. Walls are all we have to orient ourselves here in this place, which is without roof or pillars. “I don’t know how” this transformation took place, the unnamed speaker confesses almost shyly, but suddenly she seems to have so much space inside. I love the care and attention of the speaker’s observant eye that draws my own eye down the page. This eye is able to see even the print of lettering on pocket lint, the smallest creatures taking their place in the choreography of worship, and how it all constellates into a whole, into praise. Suddenly, in the very end the “temple” itself moves, rising and bowing along with all the worshipping spirits within it.

“My Life as an Open-Air Temple” by Sharon Dolin

From cramped to roofless
——-I became—I don’t know how—
————–an open-air temple with no pillars.
My walls of stone, lichen-covered,

where many feet came to pray.
——-The willows shook around me
————–as mice and small insects
knelt in moonlight, I could feel

the breath of many spirits
——-winging through my chamber:
————–rabbis dropping pocket lint—
specks of letters their devotional

thumbs rubbed off prayers—
——-peppered the air. As lithe women
————–led the service of dancing
I saw the specks drifting

into place, magnetized into
——-Ayin-Lamed-Yud-Nun-Vav
————–Aleinu wafting in air.
And I arose within my life and bowed.

Sharon Dolin is the author of six books of poems, most recently Manual for Living, Whirlwind, and Burn and Dodge (all from Pittsburgh), winner of the AWP Donald Hall Prize in Poetry. The recipient of a 2016 PEN/Heim Translation Fund grant, she directs and teaches in the international workshop Writing about Art in Barcelona.

Above image by Ondrej Salek, used with permission under a Creative Commons License.