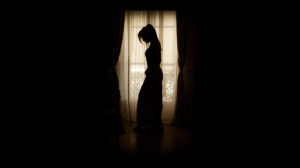 It refused to rain during the hot, middling July weeks the summer I turned fifteen. The clouds hung low over the Plains. My mother and I fought nearly every day during that dry month, even if our fighting was mostly silent, threats drawn from taut eyes and skin.

I pushed always, every day, against an atmosphere full to bursting. She and her doctors tried to find a perfect storm of antipsychotics and antidepressants, but the voices telling her to break the dams of her mind, her body, and her family were stronger than ever.

The weight of the air, the way we watched the corn die and the deer stamp their frustrated hooves in the fields, brought a heaviness into our house. I lay sweltering in my bed at night, pressing my face against the window screen, in the hope of a breeze. Even Lake Superior, so reliable in tracing an east wind down our spines when the sun fell, was quiet and forgotten. In all this infuriating stillness, my family moved through the days toward a charged cloud.

My father drove me to Bible study one day and rain began falling as we passed through town, a small shower of heavy drops that exploded like clear insect stains against the windshield.

I walked to the bathroom in the church’s new addition, and sat inside with my head on my knees. Every part of the world outside the bathroom spun wildly toward some unknown place, and the rain beat down hard, full of intent, on the metal roof left by the builders. I began to think of ways to change, to become a cloud that could stream and shift at will.

The previous summer, my friend Maggie and I spent a week at a religious camp. Anticipation for the evening sermons ran currents under our skin all day, until night packed us into the main room of the church. The camp leader was a tall, joyless man who gave himself over every night to our singing and shaking and yelling and falling and speaking in tongues we invented. He moved through the crowd, all long stern limbs, helping children lost in their prayers to lie down, casting out demons by request. Heat from our bodies made the room pulse, as if by searching for our own evil and the drug that would cure it, we were driven happily into the sham universe of our own grasping guilt.

Maggie knelt at the altar, her head on her knees. Over the days we’d been at camp, she never participated in any of the hikes or swims, always being too dizzy or unsteady on her legs. She joined us for meals and toyed with her food, sitting with a far-away look of contempt for those who ate hungrily. At night, she curled up on her bed, arms still wrapped around herself, her skin transparent and drawn over her bones in the waning light.

She was the first person I knew to claim demons, to ask for an exorcism. Her eyes were bright, as if she were fighting to find enough water to cry. The pastor knelt in front of her, speaking in tones none of us could hear, tones to cast out all of her badness, all the unwanted pieces she thought weren’t hers. She never looked up, only straightened when he walked away, letting us surround and soothe her, welcome the girl made innocent again back to our arms.

I loved her in that moment, so transformed in her effortless way to be new. As I sat with the individual hills of her spine under my palm, I wanted to know how she did it, how she drew comfort and awe from people. Such an easy thing, it seemed, our willingness to see the show of her guilt, the weight of her demons, and no one could see she was starving.

The moment with my hand on Maggie’s back crowded out everything in my mind as I sat in the church bathroom. Such an easy thing, it seemed, with everything so close to the surface. I took my Bible out of my bag and ripped pages its pages onto the floor.

My father came to pick me up, and I saw our Bible study leader pull him aside, concerned, as I waited in the car. My father’s face as he walked outside was open and angry. He slammed the door and drove, yelling so hard his glasses fell down his nose.

He pulled over in front of the community center.

I choked under the muscles of my spasming chest, “It won’t stop.”

He asked, “What won’t stop?” I pulled the Bible out of my bag, its torn pages stuffed carefully inside, and he looked shocked and disgusted, asked, “What is this?”

By morning, the pastor had scheduled an exorcism for the next evening, and I began to realize the price for a few hours of possession. Some of it I desired—the hugs from my friends at school, the suffering writ large and supernatural on my body when I sat in church. Some of it I feared, and I let my parents pull at my arms in the church parking lot when it was time for my exorcism, promising I would pray harder, I would take care of everything myself, and those men would not have to fumble over me.

When I tell people of my religious upbringing, I introduce the story of my aborted exorcism as a joke. But the need for possession, the need to let something else spill my contents, was in the air all summer. Instead of blaming it on the rain or my family, I burst with what was believed. And every summer when the rain comes after those dry weeks in July, I wait outside for the urgency in the coming storm, knowing there are many ways to be possessed.

Above image by Shots of Carmen Fiano, used with permission under a Creative Commons License.