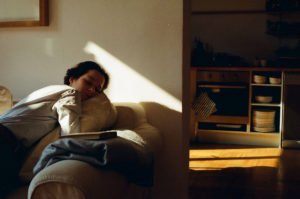 I am entering the Age of Subtraction. Almost as if there existed an imperceptible fulcrum I had to get over, and I’m now finding myself sliding on the downside.

So much of adult life until now was about Addition—collecting experiences and perspectives—countries been to and books read, bands seen—and then a husband and family and job, and eventually, stuff. Though relatively speaking, not all that much stuff.

And certainly not any small, precious, “curated” collection of stuff that “sparks joy” a la Marie Kondo and The Life Changing Magic of Tidying Up.

Not that I don’t love the world in which I find myself, the world that my husband and I, with extravagant blessings from God, have created.

A world that includes family dinners every night around the dining room table, and long afternoons where the dog sleeps in a patch of sun on the bed, her fur hot and fragrant when I lean over to nuzzle her with my cheek. I watch my children arch onto their bikes and pedal off—“as graceful as cowboys,” to steal a phrase the novelist Josephine Humphreys used about garbagemen.

Later, in the purple of dusk on a Sunday night, I see my husband’s strong arms set the trashcan on the curb, another wordless fulfillment of duty, and my life reverberates, again, around its bright center.

It’s not all Proustian leisure, certainly—there’s the panicked driving through thunderstorms in Monday morning traffic, and conference calls conducted in cars. My son has sworn at his sister, and then I have sworn at him—keeping us both regular customers at Confession.

I live near the very center of the city that people all over the political map like to call “The Problem,” and both my husband and I work for media organizations where part of our work involves tracking and monitoring the ephemera of news events. We are often called upon to respond to emails at home after dinner, even if we did have that family dinner first.

I am not, in short, one of those Eastern Orthodox converts who has figured out how to have a life in the country with homeschooling and a backyard chicken coop and an apprenticeship job like being an electrician. (Among us, this is kind of a trend.)

I used to feel really judged by those folks—none of those aspirations were at the root of my conversion—but I do now think that these agrarians are on to something.

All I have really done—and it sounds like nothing, but to us it feels really huge—is to decree that there will be no electronics on Sundays.

We already didn’t have cable. And network television these days appears to be only about farts, blow jobs, “winning,” and a weird obsession with creepy crimes. (What IS a Special Victims Unit, anyway? And even that was like fifteen years ago!)

I’d already sworn off pretty much any recreational shopping on Sundays—but there were still the enticements of the laptop: The Sunday Times and Post, the rabbit hole of political commentary one can so easily fall into, toggling back and forth between The New Yorker, The New York Review of Books, and New York, then following some random ad to compare prices on something totally unnecessary.

Ain’t nothing wrong with that! I can hear my mother—who hated any Sabbatarian tendencies and was delighted when blue laws went away—declaiming from the blue vinyl armchair in front of the TV. (It was she who benefitted when there stopped being a stigma in the South about not going to church, which meant that she basically didn’t go anywhere. Except into the screen.)

No, there really isn’t anything wrong with it, and yes, I believe in grace not law, but what’s true is that there is this mental clutter in my head and in my children’s heads and I wasn’t doing anything about it!  (My husband, the mensch, practices guitar.)

And neither Joe Scarborough, Lena Dunham, David Brooks, Kurt Andersen, Ira Glass, Walter White, nor Roxane Gay were doing anything about it, either.

Furthermore, wouldn’t going electronics-free as a Christian seem to be an appropriate act of solidarity not only with observant Jews, but with the many Buddhists and freethinkers also terribly concerned with the all-voracious digital market?

When we told our daughter that Sundays, from now on, would be electronics-free, she threw herself down on the sofa and wept, kicking her legs as though a demon were coming out of her. She slammed the door of her room. (All for a mere hour or two of Peppa Pig, mind you.)

“You’re so mean you wouldn’t even play Candyland with me,” she hissed.

“Ah, but you’re wrong about that. Go get it and I will prove you wrong.”

We sat and played three games in a row. And the point of mentioning this is not to highlight the fact that I was paying attention to my child—although that was certainly good, too—but that time itself changed while we were sitting there.

Time, we found, had a frame, and a depth that seemed to stretch out onward—as though we truly were in another dimension. Not the staccato skating upon the top of the waves that seems to be the way we experience time on other days.

In the quiet my daughter wrote her brother a letter to send him at camp. The house is small but became cavernous with space. I thought about how much less, and less, and less I could live with. All in preparation of that day when there would be nothing left to have.

We need so little. There is only one thing needful. I want my children to know this.

Above image by barbara w, used with permission under a Creative Commons License.