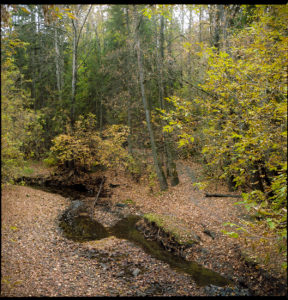 My father told me that when he used to bird hunt through the Kilgore Hills in Northeast Mississippi, he would sometimes come upon a whisky still or two. This was back in the late thirties and forties, long after prohibition had ended, but the whisky makers were still easily spooked. Revenuers were still on the prowl, I suppose. At any rate, the stills would be bubbling and smoking along as my father passed by with his setters—Nell or Snow Boy. The makers would be hiding somewhere in the woods, watching.

He was told by his own father not to fear anything; the men probably knew him—were likely even kin—and they wouldn’t bother him if he just walked on through. Turning your back to the illicit was the appropriate response in such circumstances. Avert the eyes and mosey on; don’t look back.

Whenever I was told this story, I would long to come upon something in the woods of a similar nature. But the days of a boy walking for miles in the hills, hunting over anybody and everybody’s land without permission, were a distant memory when my own time came. We hunted mostly on our own place, or on that of friends, and the quail population had already thinned dramatically by then. Agricultural land, devoted to row crops, is what coveys thrive upon. But when large-scale farming retired into memory, quail seemed to lose their purchase upon the land.

I think my father had the vain hope that if we just raised enough bird dogs and stayed after it, our sheer persistence would change things. And we were in fact rewarded, all in all, for his efforts. There were many fall and winter afternoons spent kicking along fencerows, and from time to time we even participated in field trials, where the dogs competed in finding birds. Still, the number of dogs we raised was out of all proportion to how many coveys of quail there were left.

So coming upon something unexpected while walking through the woods, despite my fondest hopes, was practically impossible. I had to content myself with finding arrowheads and Indian money, walking through abandoned shacks to read the old newspapers used to chink the holes in the walls, and discovering and rediscovering the remnants of a road bed that was said to carry over the hills and lead all the way to Memphis. I was able to persuade myself that I was living a sufficiently rustic life—which was undoubtedly more than my peers led, though nowhere near what my father had.

I have lived in a very large city for over twenty years now, and even before, had bounced around the country from one less-than-rural setting to another. My walks in the woods have been few and far between, and mostly no more than hikes upon trails that the forest service has marked to keep people away from any potential danger. Criminals are no doubt all around me, but not the harmless kind of my young imagination, who set up enterprises in shady vales and watched from a kind distance as youthful trespassers made their fascinated way through them all.

But the other day, while visiting a relative, I took my dog for a walk in the early morning hours. This was a very suburban setting—a gated community surrounding a private golf course, with security guards patrolling the area. Every lawn is maintained by a landscape service and sprinklers come on at night to keep things green and thriving.

Still, the heritage of this development was something quite different. It had once been a five hundred acre working farm. An antebellum home sits up near the front gates. It was the original house that belonged to the family that sold the place to the developers after owning it for nearly two hundred years. The home is used for a clubhouse now—wedding receptions and party venue, etc.

When I took the dog out around five in the morning (the benefits of insomnia), I was able to skirt along the old property line. There, back in the trees, I found the old page wire fence and locust posts that bounded the farm. It hemmed in livestock back in the day, not stray golf balls.

To my surprise, back along this fencerow I discovered a creek bed, and in that creek bed, I found an assortment of illicit things: a fire pit with an iron stove, which one of the homeowners must be employing for wintry entertainment; a set of tire swings, hung from oak tree branches, which must delight a family’s children; and most amazing of all—an old truck, apparently still in running condition, as there were planks laid down under the wheels to give it traction for when the owner decided to pull it out of hiding and drive through the backyard to the cul-de-sac.

These uses are surely against the homeowner’s association rules. They are surely not permitted in the community handbook. And yet, there they were, evidence of unregulated use, of pleasures stolen and enjoyments unpermitted. I suppose there’s a kind of conspiracy of silence among them, as they all know they’re breaking the rules.

Seeing all of this did my heart good, at the kind of atavistic spirit that lives behind the showplaces that face the public. It wasn’t so completely different from the Kilgore Hills some seventy years ago.

Perhaps the homeowners were watching, kindly, as my dog and I passed by. We averted our eyes, and traveled on.

Above image by Kurt Bauschardt, used with permission under a Creative Commons License.