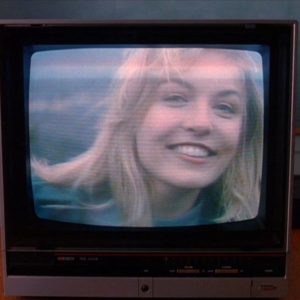 This post originally appeared at Good Letters on June 1, 2012.

One of the toughest and most important jobs I have as an English professor at a small, women’s liberal arts college, is teaching students to write well.

I would love to hold forth on Flannery O’Connor—my lifelong literary crush—but getting students to care about writing involves helping them find something they’re interested in, not foisting my predilections upon them. My job in first semester English composition is to make sure students know how to write a thesis-driven essay that draws upon primary and secondary sources for support—something as enjoyable as hand-plowing with a team of oxen—and about as practical from a student’s perspective.

I’m keenly aware of this perception and always look for new ways of enlivening an otherwise deadly experience. This semester I decided to show the class several episodes of what is no doubt one of the kookiest, strangest, and downright scariest shows ever on network television—Twin Peaks.

The search for her killer introduces a parade of grotesqueries that gives Sherwood Anderson and Flannery O’Connor a run for their money: a one-armed shoe salesman, a dancing midget who talks backwards, a stringy-haired demon named BOB, a cross-dressing FBI agent, and a giant.

Before we got to the fun, I needed to provide historical context, so we read Sophocles’ Antigone, and an essay by Sue Blundell whose book, Women in Ancient Greece, explores how representation of women in Greek drama reveals Athenian men’s deep anxieties about women transgressing traditional roles.

Despite Blundell’s learned and fascinating perspective, discussion lapsed into talk of what “a crazy bitch” Antigone was, which became the thesis of many first essays: Antigone was crazy; she deserved to die. The correlation between her perceived mental instability and her death was not explored so much as asserted as fact. That fallacy coupled with typos and grammatical errors, meant the average grade at midterm was a C-.

After spring break we began watching Twin Peaks. Each class we watched part of an episode and then discussed it through the lens of our previous conversations about Antigone and Blundell, but also with an understanding of the ways Twin Peaks appeared in the media. Esquire featured Laura Palmer on the cover of their 1990 “Women We Love” issue very much alive, but still wrapped in the plastic sheeting her dead body is found in at the beginning of episode one.

In an essay titled “Lynching Women” written soon after the show was cancelled, Diana Hume George admits to being enthralled by the show; however, after reflection, concludes that, contrary to Third-Wave feminist commentators who saw Twin Peaks as empowering, the sexual politics are actually “reptilian,” perpetuating misogynistic views that will lead to further violence against women.

This got my students’ attention.

Most of them were wary of feminism—the term conjured up angry man-haters and bra burnings—and so the idea that a television show could be blamed for violence against women was difficult, and in some cases impossible, for them to accept.

One student said dismissively, “If you looked at the world in that way all the time, you would be really sad.” In other words, reflecting on ways our popular culture might promote or excuse violence against women is depressing and not worth doing.

My students’ position is not completely unfounded. For years social scientists have tried to find a connection between exposure to media violence and violent acts without success. In 1967, Jack Valenti, head of the Motion Picture Association of America, defended the film industry citing lack of evidence during testimony before a government commission on the prevention of violence.

Just last year (2011), Philip Zimbardo, the psychologist who conducted the infamous 1971 Stanford Prison Experiment, gave a TED talk called “The Demise of Guys?” in which he claims that video gaming and pornography have created a generation of boys whose brains have been “digitally rewired for change, novelty, excitement, and constant arousal.” He reports that such rewiring spells trouble for young women looking for men who are sensitive and understanding.

But in TED’s six-minutes-or-under format, Zimbardo leaves a lot unsaid. He could have cited his own research showing that the issue seems to be environmental, a combination of nature and nurture. The college students he locked up in makeshift prison needed little motivation to begin treating one another brutally, which raises the question of what does it take to counteract such apparently hard-wired instincts?

So what to do? Abstinence from media violence is unlikely and nearly impossible in our wired world, leaving the responsibility with the viewer not the author.

The only sensible position I have been able to find, is that of Austrian philosopher and radical Catholic priest, Ivan Illich, who writes in his essay “Guarding the Eye in the Age of the Show” that for him the question viewers should ask is, “What can I do to survive in the midst of the show?” not, “How do I improve show business?”

When I teach Twin Peaks again next year, I will be eager to share this quote with my students, as I hope it will allow them to see that though they may not care for the politics of feminism, questioning the portrayals of women before them on the many screens that pervade their lives, does not make them “a crazy bitch,” it puts them in a position to become authors—to rewrite the roles women have traditionally played.

As Flannery O’Connor wrote: “The writer should never be ashamed of staring. There is nothing that does not require his attention.”

David Griffith is Vice President and Richard and Emily Smucker Chair of Education at the Chautauqua Institution and former Director of Creative Writing at Interlochen Center for the Arts. He is the author of A Good War is Hard to Find: The Art of Violence in America (Soft Skull Press) and is completing a manuscript titled Pyramid Scheme: Making Art and Being Broke in America on the connections between poverty and creativity. David is a frequent contributor to Image and former “Good Letters” blogger. He taught English at Sweet Briar College when this post was originally written.