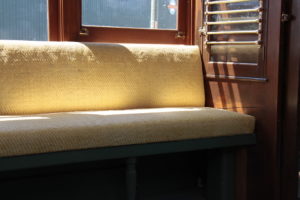 Towards the end of his life, Winston Churchill famously quipped: “I am ready to meet my Maker. Whether my Maker is prepared for the great ordeal of meeting me is another matter.”

As is always the case with humor, a world of seriousness is implied. For one thing, the statement rests upon an understanding of worth, or the lack thereof. It does not presume a consequence—i.e., there is no confident assurance of acceptance and glad welcome upon the meeting. There is only a statement of readiness, of a time that is come.

Another thing left unassumed is that readiness is equivalent to preparedness. We have all experienced a time when we were more anxious to go than we were fit to depart. Sometimes a start has to be made whether or not the bag is completely packed and the car is well tuned.

All “set”? No, not really—but already on the way, by God.

Hopefully, when we arrive where we’re going, they’ll have to take us in. That’s one of the definitions of “home,” according to Robert Frost’s “The Death of the Hired Man” (the other is that home is “something you somehow haven’t to deserve”).

But the most intriguing thing about Churchill’s representation is the part about the “ordeal”—and not only any ordeal, but a “great” ordeal. As stated, it presumes that we have a sense of our unworthiness, something that might seem quaint in this day and age.

Any traditional Judeo-Christian view would take as essential the humble appreciation of one’s fallen nature, a nature that is in need of grace regardless of age or station. Even the saints have required this grace; it’s just that they understood better than most their lack of it, and opened themselves for its reception to a greater degree than the rest of us, who trip blithely along on our damned and merry way.

Still, these days, it is a point beyond challenge that awareness of our own depravity has become a disfavored theological precept. The higher form of consciousness is now attained not by seeing what we are not, but by valuing what we are. Self-worth, self-esteem, and realization of essential goodness are the self-actuated channels of grace; they unlock it from the inside; there is no need for descending doves.

Both the wholly secular and the mainstream progressive institutions preach this. They would say that if we are to “meet” God (whatever that is) at all, then we will do so on equal terms. In fact, the very idea of God and the self tend to become confused, so that who is exactly who is more than a little unclear and maybe not even very important.

All I can say about such a thing is that I can’t see my way to it; my attempts at self-improvement have been minimal at best and their achievement even scarcer. That’s why the idea of grace resounds with me, not only on imaginative but also on practical grounds. Send down the doves.

So if you return to Churchill’s orientation, the lack of worth and the need of grace leaves God in something of an awkward position. Here we are, back home again, tattered and dirty and depleted, without a pot to cook in or a window to throw it out of (as they used to say back where I come from).

Which puts one in mind of another memorable poem, George Herbert’s “Love,” with God as host to an embarrassed visitor, one who feels the ordeal of the meeting more keenly than he who should object:

Love bade me welcome: yet my soul drew back
—-Guilty of dust and sin.

But quick-eyed Love, observing me grow slack
—-From my first entrance in,

Drew nearer to me, sweetly questioning,
—-If I lacked any thing.

And in this, perhaps there is the answer to what lies at the root of Churchill’s little jest, which a great and thoughtful man such as he in all likelihood meant more sincerely than might be guessed.

For some unknown reason, we are invited to the meal. And for some greater unknown reason—the greatest mystery of all—God has put himself through the ordeal for us. He has gone to all the trouble it seems, and a great bit of trouble it has been. After all, if you take the orthodox Christian view, it is a truly remarkable thing that a victim should entertain his murderers in so grand a fashion. It fairly destroys the grounds of propriety; the mind boggles that he sets the table as he does.