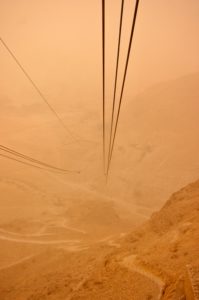 Two of our most compelling film directors working in the Hollywood studio system—Darren Aronofsky and Denis Villeneuve—recently released startling movies, and the movies have obvious differences.

I’m struck by a common thread that binds each film’s disturbing vision of the future: the missing mother. These films unveil a longing for Sophia, an aspect of God with which both the religious and unreligious have lost touch.

Sophia is a Greek term for “wisdom.” For some Christians, the role of Sophia in Proverbs is a direct line to Christ the Logos in John’s Gospel. Other Christians, including most recently the scholar Michael Martin, have written persuasively that Sophia is distinct from the Logos.

She has to do with how God’s glory inheres as divine presence in the creation. The wisdom with which God created is to be found when we seek Sophia. She reveals herself not only when we contemplate nature as the created order, but also when we participate in that wisdom with our own creative potential for beauty.

As Martin puts it, Sophiology is neither strictly theology nor science, but the creative in between linking the two in a better way forward for humanity. The contemplation of Sophia across the arts, sciences, and theology can be regenerative.

What is lamented in mother! and Blade Runner 2049 is a sense of loss at Sophia’s absence.

The horror of mother! is the perspective of a wife stuck in the presence of her overbearing husband. They live in a recently burned house in the middle of the woods. He is an author struggling to create; she has an intuitive, even mystical sense of the house as a living environment. She regularly imagines a beating heart behind its walls. They live a tranquil life together, until visitors arrive.

The chaos that unfolds is like a horror film that follows many of the most prominent beats of the Biblical narrative without any of the joy of discovering wisdom.

Many viewers have speculated that the husband represents a god-like figure (though not God). You might describe this god as a flawed, Groundhog Day artist who is obsessed with the starting over.

This god’s followers are devotional in a way that doesn’t attend to the home they have been invited to. They trample the renovation work of his wife, who has been likened to various figures, including Mother Earth, Gaia, and, yes, Mary. She is Mother.

If we combine Aronofsky’s interests, irrespective of his intentions, Sophia is a compelling frame.

In her excellent review, Alissa Wilkinson writes, “In mother! [Aronofsky] retwists the Christian version of the world’s history, suggesting that it’s always been told from the point of view of God’s dominant masculine nature—and without much thought to what the feminine side might think.”

Maybe Aronofksy’s horror is less about God, and more about how even the most devout believers have missed something critical about God in their theological vision.

From the claustrophobic, close-up point of view of Mother, we see human beings quick to deface the world and quick to serve a version of God made in their image.

Another possibility for usurping what has been given is mass-producing bioengineered humans, or “replicants.”

Set thirty years after the original film, Blade Runner 2049 follows a replicant named K, who in the beginning of the film finds the remains of a once-pregnant replicant. This was considered an impossibility—a “miracle.”

The child, who is alive, poses a threat to the bioengineering corporations of this dystopian future because birth suggests soulfulness. The replicants would obtain a freed humanity because of the possibility of being begotten and not merely made. Freedom would lead to an uprising among the servile replicants.

K is programmed for unswerving obedience as a “blade runner” for the LAPD and is tasked with killing the child and destroying all evidence. He discovers that the child’s mother was Rachael, the replicant who (spoilers ahead!) fell in love with Rick Deckard, the original (and human) blade runner.

For much of the film we, along with K, have a growing belief that K is the child.

Rachael’s absence looms over everything, lending the neo-noir tone to the sequel.

It’s not only the Mother’s absence; it’s also the treatment of women in this dystopian vision.

Sexualized consumption of robotic, servile women litters the film’s iconography. The film even borrows a sex scene from Her that probably fits far better in this film’s dark world. The inhumanity toward Rachael may be the point; in fact, the film’s final reveal of the child’s identity may be the exclamation.

What does it mean to make new in the midst of mortal ends? The point is not only the consequences of bioengineered humanity; it’s what our visions of such a humanity reveal about what we desire for ourselves: A full-fledged miracle in our midst.

mother! begins with a burning Mother. Blade Runner 2049 begins with the extreme close-up of the human eye. I suspect in both films we are in search of the soul that animates with wisdom both our humanity and all the rest of our material existence.

Like Rick Deckard, the West is growing old, and something new is waiting to be born again, if only she will be rediscovered.