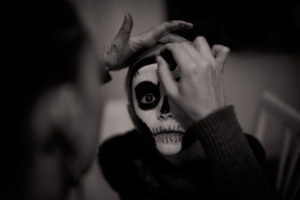 My son Sam, like many six-year-olds, is a devout observer of Halloween. He loves the candy, of course, but he also thrills to the other accoutrements of the holiday: the decorations, the parties, the music (his favorite song is Edvard Grieg’s “In the Hall of the Mountain King”).

Sam is also an unusually dogmatic trick-or-treater, as he will wear only costumes inspired by the sinister underworld. In his view, darkening a neighborhood doorway dressed as a baseball player or barnyard animal demonstrates a fundamental misunderstanding of the holiday.

One year he went as a ghost (the classic sheet with holes cut out). The next year, he begged me to order him a gruesome grim reaper costume we saw online. I finally talked him down to a spider—black trouser socks stuffed and sewn onto a black sweatshirt. This year he plans to be a skeleton.

Over the years I have offered up my share of misguided costume suggestions. Batman, dark and depressive as he may be, was stricken from the roster for being a good guy. Darth Vader exceeded the requirements for both scariness and moral bankruptcy but was disqualified for being “not real.” (Who knew a six-year-old could discern that the grim reaper is real in a way that Darth Vader isn’t?)

Each year when October rolls around I wonder at the psychology of this. Where does it come from, this strict constructionism around Halloween costuming? What purpose does it serve?

Is it a vaccine—a little bit of fear to inoculate him against what is truly fearful? Is it a simulation—a chance to practice facing the real monsters? Is it an infiltration—an attempt to understand the darkness in order to know how to conquer it?

Sam was a dinosaur on his first Halloween. I bounced him on the stoop of our Brooklyn apartment, waiting for my husband to come home from work. Our Polish neighbor kept us company, offering Sam candy, which I declined since he was three months old. When my husband arrived, we set out to explore the neighborhood. A clown volunteered to take our picture outside the pharmacy on 5th Avenue, so we sat on squares of hay and smiled. In the photo, the clown’s colorful afro is reflected in the drugstore window behind us.

Six days later, on All Saints Sunday, we took Sam to church and had him baptized. We stood in front of our congregation flanked by two other couples and their babies. Sam was dressed in miniature khakis, a white Oxford shirt and Argyle sweater vest. My husband held him facing outward.

“Do you renounce the devil and all his works?” our pastor asked us.

When I was growing up we were allowed to trick-or-treat as long as we weren’t anything scary or sinister. One year we went to one of those Halloween-alternative events in a church gymnasium, where we dressed as Bible characters and rotated through a series of Ancient Near East-inspired games. I was one of several Marys, in a long dress and sandals, Cabbage Patch Jesus in one arm, candy bucket on the other.

Now, faced with a child who believes you shouldn’t bother with Halloween unless you’re going to be scary—because, really, what’s the point?—I have to admit I prefer the logic of Sam’s view.

The funny thing is, Sam in his skeleton suit would not be out of place in that church gymnasium. He could pass for the dry bones God brought to life in a desolate valley before the eyes of the prophet Ezekiel: a great rattling followed by a great reassembling. A vast army of the resurrected. A glorious zombie apocalypse.

Some theologians argue that Halloween has historically been celebrated by the faithful as a mockery of a dark realm overcome with light, of evil rendered harmless by the Ultimate Good.

I like to think this is what Sam is after. Year after year, All Hallows Eve after All Hallows Eve, he slips into costume, takes his stand in the Valley of the Shadow of Death, and stares down the darkness, unafraid.

Katie Hautamaki is the former deputy editor of New York Family magazine. She lives in Tallahassee, Florida with her husband and three children.

Photo used with permission by Janko Ferlic on Unsplash.