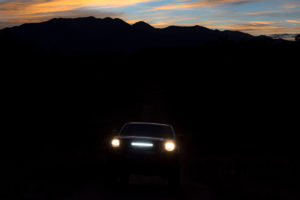 The end of Arcade Fire’s latest album finds the band somewhere unexpected: the tomb of Christ. “Mary, roll away the stone,” frontman Win Butler rasps as “We Don’t Deserve Love” approaches its climax. “The men that you love always leave you alone.”

Many reviews of Everything Now—the band’s worst-received effort by far, according to Metacritic—take issue with the album’s apparently unqualified cynicism. But these same reviews have made nothing of the redemptive recognition invoked at the album’s end. Distracted by the album’s pronounced bitterness, reviewers have overlooked one of its most striking features: the gospel reference to Christ’s resurrection.

The scene invoked is Mary Magdalene’s waiting at the tomb of Jesus—weeping as she tells the angels stationed outside, “They have taken my Lord away, and I don’t know where they have put him.”

As Mary cries, a figure approaches:

He asked her, “Woman, why are you crying? Who is it that you are looking for?”

Thinking he was the gardener, she said, “Sir, if you have carried him away, tell me where you have put him, and I will get him.”

Disgruntled reviewers have made much of Everything Now’s repeated reference to a fan’s contemplated suicide—“she says she got so close, / filled up the bathtub and put on our first record” from single “Creature Comfort.” Pitchfork described the album’s treatment of self-harm as “callous and obnoxious, unpacked without grace or taste.”

But if the album’s narrative arc bends toward recognition and resurrection, such accusations fail to engage with the record’s real design. Everything Now treats self-harm not in a spirit of meanness, but in a spirit of seriousness, looking for grace on the other side.

This is not to say that Everything Now isn’t insistently dark. It is indefatigably obsessed with the multimedia barrage of what Butler calls “infinite content,” something like McGill University philosopher Charles Taylor’s “immanent frame”—a frame within which everything demands one’s attention, but is impossible to prioritize without reference to any transcendent good; a frame within which, in Butler’s terms, “every song that I’ve ever heard / plays at the same time, / it’s absurd.”

But its obsession with this reduction is not merely negative. It is instead a way of reaching, if only by way of negation and longing, outside the immanent frame; a way of trying to make contact with something both transcendent and irreducibly here and now.

Butler, a religious studies major at McGill who was raised Mormon, has spoken in the past about his tendency to question religion “in a way that only someone who cares about it can.” The eventual appearance of the empty tomb, a sign of loss and longing as well as rebirth and ultimate affirmation, is no mistake.

“We Don’t Deserve Love,” best embodies the album’s central preoccupations. Butler opens with a bit of Springsteen, circa 2017: “Keep both eyes on the road tonight / ’Cause I’m driving home to you / Terrible song on the radio / Baby, what else is new?”

Pedal steel guitar from producer Daniel Lanois—of Bob Dylan’s Oh Mercy! and U2’s The Joshua Tree fame—engenders a depth of beauty the rest of the album has forcibly suppressed. It is as if the bulk of Everything Now were engineered to make us miss beauty, to long for it, rather than to offer beauty up for us wholesale.

The next lines embody the album’s problem of vacated desire and overwhelming numbness more clearly than anything else on the album: “You don’t wanna talk / Don’t wanna touch / Don’t even wanna watch TV,” the speaker says—addressing a woman, perhaps the suicidal character of earlier songs, who sometimes says to her lover, “maybe we don’t deserve love.”

The speaker attempts to console the woman with a promise of new life through a kind of radical renunciation, something like Christ’s admonition to gouge out one’s eye before allowing that eye to imperil one’s immortal soul: “If you can’t see the forest for the trees, / Just burn it all down / And bring the ashes to me.”

As the song goes on, Butler finally graces the album’s central character with a name: Mary. And Mary blurs, at the end, into Mary Magdalene, first in the Gospel to see the stone rolled away and Jesus resurrected: “Go on Mary, roll away the stone / The men you love always leave you alone.”

Butler’s address to Mary in turn blurs into an anguished invocation of Christ, a direct demand of divine intervention in the face of “everything now” and the self-loathing it leaves in its wake.

When Butler implores, at the album’s close, “If I don’t deserve love / Could we deserve? / Come down off your cross / And tell me,” he offers a hesitant pointer toward a way out of the world of “infinite content” and “everything now”—a way, in Scottish pastor-poet George MacDonald’s phrase celebrating the nativity, “out of the everywhere, into the here.”

The Quietus review best captures the reviewers’ real complaint: “this album is exactly what none of us needs right now.” But who is this “us” that doesn’t “need” this album right now? And even if there were an “us,” how could we be trusted to know what we need?

Everything Now, like all the best Arcade Fire, poses just this question: the question of what it is that we really need. In light of the problem of serious self-harming depression and of the constant bombardment of “infinite content” to which we now know that problem to be related, the album turns Christ’s questions on us all: “Woman, why are you crying? Who is it that you are looking for?”

A Kentucky native, Adam Horn is a PhD Student studying Medieval English Literature at Columbia University in New York City. He has published writing for the Norton Annotated Peter Pan, and writes songs for his Brooklyn-based folk band, Rookin.
Photo used with permission by Adam Meek on Flickr.