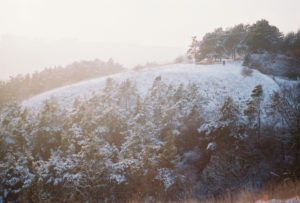 Winter is coming. All of northern Michigan seems to whisper the warning. The sun is slower to rise each day, and the mist clings to the lakes when I drive my children to school in the darkness. Our neighbors have been anticipating the first snowfall since we arrived here in August, when it was ninety-two degrees and sunny. They look stern and offer advice (much-needed) on snow tires and Vitamin D supplements.

I can’t help but think of the residents of Winterfell in Game of Thrones. If the threat of such a long, hard winter wasn’t terrifying to me, a homesick Southerner who has never owned a proper coat, I might find it funny.

When I open my checking account, the bank teller raises her eyebrows when I say we’ve come from Virginia. “Have much winter there?” she asks, knowing the answer. The lady at the shoe store tells me I need four pairs of boots, not one, “for the four types of winter days: wet, icy, snowy, and it’s-May-and-if-I-wear-boots-another-day-I’ll-cry.” I suspect she’s taking advantage of me, but later a real rugged Northwoods type confirms her advice.

“And don’t get cheap boots either,” he warns, “or you’ll cry like a baby.”

Our new doctor recommends a high-quality multivitamin and a ski pass. Skiing and snowshoeing and even ice-skating are all as foreign to me as a moonwalk, but I smile and nod and try not to look worried.

“You can’t hide from winter here,” she says. “You have to embrace it.”

I sit by the bay on sunny days, straining to store up the sight of it for the coming months when earth and sky will—I’ve been promised—become an unbroken colorless plane. I think of the family in Ray Bradbury’s Dandelion Wine, who collect golden summer weeds and press their liquor into glass bottles to line their basement shelves, so that in the dead of winter they can tiptoe down and commune “with a last touch of a calendar long departed.” The words dandelion wine, repeated as a mantra, uncork a “sudden patch of sunlight in the dark.”

The young Douglas, who comes of age in these stories, suffers from the dawning awareness that to be alive is to watch good things pass away. His perfect summer is marred by its inevitable ending, by the departure of his dear John Huff, by the thrilling but terrifying discovery of the body as a “clock gold-bright and guaranteed to run”—and thus to run out. This is a recurring theme in Bradbury, and the young Douglas who wakes up to his mortality isn’t so far from the guy who is tormented by his own skeleton, the memento mori that supports his very being.

But this isn’t just the stuff of fantasy or science fiction. Waiting for winter I’ve turned to books for distraction and consolation but find there instead a collective protest against the running of the clock. Today the Writer’s Almanac featured Shakespeare’s Sonnet 73:

That time of year you mayst in me behold
When yellow leaves, or none, or few, do hang
Upon those boughs which shake against the cold,
Bare ruined choirs, where late the sweet birds sang.

Even in my kids’ library, Leo Lionni’s mouse Frederick collects the words of summer as a stay against winter’s bleak and hungry nights, and J.M. Barrie’s Mrs. Darling exclaims to the flower-bearing Wendy, “Oh, why can’t you remain like this forever!”

Douglas decides in Dandelion Wine that the only way to keep things slow is to watch everything and do nothing, and he shouts angrily at dear John Huff when he sees him, on his last day in town, running in play, running out their last hours together.

First Douglas tries to convince John it’s earlier than it is by winding his watch back, but John, the realist, can tell by the sun’s fading that the day is ending. Douglas attempts to freeze him, literally, in a game of statues, and as he circles his motionless friend in the twilight, Bradbury circles his conjured memories on the page, uncorks the bottle and finds “John Huff with grass stains on his knees…cuts on his fingers…with the quiet tennis shoes…the mouth that chewed…the eyes, not blind like statues’ eyes, but filled with molten green gold.”

‘“John, now,’ commands Douglas, ‘don’t you move so much as an eyelash. I absolutely command you to stay here and not move at all for the next three hours!’

John Huff knows that the watching of everything and the doing of nothing can lead only to madness and despair. Winter is coming. As the doctor said, “You can’t hide. You must embrace.”

And yet we can’t help our mourning. We long for that perfection we sense is our destiny and the destiny of all we love and find beautiful—an endless summer, a golden flower that doesn’t fade, a child that doesn’t grow old, time unsullied by the pressure to remember the good things just as they are before they slip into the shadows, because goodness endures.

I am Douglas on my bench by the bay, memorizing the color of the October sky, and later, at my children’s bedside, winding my watch and playing at statues. I smooth my daughter’s hair and run my thumb over the patch of soft down on the bridge of my son’s nose.

“Don’t you move so much as an eyelash.” Gather, press, store. Line pages with words and shelves with glittering bottles. Winter is coming. Dandelion wine.

This post originally appeared at Good Letters on October 30, 2013.

Jessica Mesman Griffith is a widely published writer whose work has been noted in Best American Essays. Her memoir: Love and Salt: A Spiritual Memoir in Letters, coauthored with Amy Andrews, won the 2014 Christopher Award for “literature that affirms the highest values of the human spirit.” She is also the author of Strange Journey (2017, Loyola Press) and a coauthor of Daily Inspiration for Women (2014, Loyola Press). She is currently at work on a second memoir of her Catholic girlhood in Southern Louisiana, called Eden Isles.