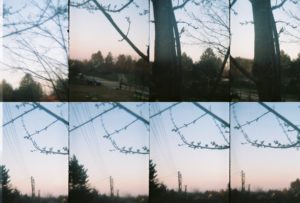 Ross told the kids to stare at the splotchy red and blue picture and wait. A dozen elementary-school students tried to sit still long enough to just look. The image could have been a representation of Claude Monet’s last sight of his breakfast nook. Color without definition, intensity without concreteness, depth without distance.

For some time, the kids squirmed in their seats, not “getting it,” and then at last one, then another, began to shout, “It’s doing something!” and “It’s disappearing!” Then a few more started to see it. (Yes, you can try it yourself. Go ahead; it’s fun.)

On Science Saturday, students from area high schools and colleges come to teach our elementary students about chemical reactions, the principles of flight, and optical illusions.

Apparently, as Ella (a Northwestern student) explained, we still don’t entirely understand optical illusions. Current thinking is that, since our brains tend towards efficiency, they rely on pre-established frameworks and contextual clues to interpret sense perception rather than giving absolute, documentary information. Thus, we either see a vase or two faces, or we see orange circles as different sizes depending on what surrounds them.

I’ve verified this in Photoshop; they are both the same color: 6b6b6b.

This is only visual perception, which is one of our richest sources of information, but certainly not alone among our ways of knowing the world. Our nerves, for example, report not absolute temperature but temperature relative to where we’ve just been. I once worked a job where we’d be outside in the winter long enough to lose feeling in our hands. We’d come inside and put them under cold running water, which felt warming.

A friend recently lost his sister in a murder-suicide. Some years ago he lost his father to suicide. It’s difficult to live through that and believe “God has a plan.” It’s tempting to return my ticket and say, “If this is part of the plan, I don’t need it.”

Our pastor compared studying Scripture to an orchestra tuning. The oboe or first violin plays a long A, and then, “as if by magnetic attraction, the other musicians begin to find their way to that same note, making tiny adjustments here and there until they are all in unison.”

I guess that means I’m out of tune if I can’t see the dots as the same size or can’t believe the squares are the same color. One more sign that I’m a “bad” Christian.

Flannery O’Connor considered her vision of the Christ-haunted South realism because, as she saw it, the Catholic Christian must necessarily see reality as a battleground of our baser desires against the presence of grace. Just as the materialist will see it as a play of genetic drives or the Nietzschean the will to power.

I’m an Enneagram 6, “The Loyalist,” which means under stress I exhibit the unhealthy qualities of a 3, “The Achiever.” Unhealthy Achievers can start playing power games, which perhaps helps explain why Nietzsche is my Shadow Christ. When I’m down, the devil trots onstage in a homemade Nietzsche costume and waves a pasty finger at me, tempting me: I told you so! It’s all strength or weakness, authority and submission, freedom and ressentiment.

But as a Loyalist, I cling hard to the systems that help me make sense of the world, and Christianity, while perhaps not, precisely, a system, makes the most sense of my inner need for beauty and justice. Besides, though in my progressive circles we shrink from using this language, I know Jesus. In some mysterious, partial, but experiential way, I have met in my lifetime this spiritual presence that also walked the earth 2,000 years ago.

At least, I have found no better name for this presence than Jesus, and I am persuaded he speaks truly when he says that both squares are the same color, and that a murder-suicide does not, at the end of the day, conflict with the providence of a good God.

The logic of many illusions is that something appears to be one way, but we know it is another way. We know what is “real” because we make certain inferences about our experience or because some authority reveals it to us.

My friend has been rereading Job to deal with his sister’s death. We both know what he’ll find when he asks God for an accounting. The storm, the whirlwind, the majesty that demands submission to the mystery.

If I cannot trust my eyes to see how two colors correspond, why should I be so sure I know when two truths do not? This is part of the scandal of the cross. Not just that I am a sinner who cannot save himself, but that that which is revealed from beyond me can come to pass in my own life.

And if it’s true—and it must be or we are in sore condition—then I must devote myself to learning to see its truth, especially where illusions persist. It’s also true that I pray for a revelation that will resolve this mystery, that will lower me from this cross.