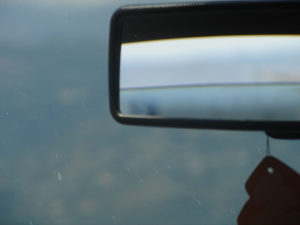 The highways that snake down and around rural Iowa are dark. Enough that, if you are driving at the right time of night, and there isn’t a lot of traffic, you can catch moments of brilliance in the sky. Stars forever. An impossibly deep night. The opportunity to take a breath.

My wife and kids were asleep, which isn’t uncommon. They share a gene that seems to be activated by getting into a car and travelling for more than an hour. Once the wheels start rolling, they’re out. We were two, three hours into a six-hour road trip that had started later than anticipated and the entire world was hidden except for a curious blue halo hanging over the distant horizon. I assumed, at first, that it was just a trick of the night—a dashboard reflection.

The road shifted left and it disappeared.

I have spent a lot of time and effort trying to get out of religious employment. It’s not that I haven’t enjoyed the work. It just comes with a certain amount of existential and professional dread that doesn’t seem to be a fundamental component of other professions.

If you’re, say, an accountant, you don’t have to worry about transferring skills between jobs. Same goes with journalists, lawyers, nurses—basically every other career. I often wonder if this fear is unique to ministry. If it’s born from the realization that, at any moment, your position could disappear, determined solely by the church’s attendance.

And given what sometimes feels like mainline Protestantism’s slow march to extinction, these moments of dread bring up questions like, “How do I even begin to explain what I do every day?” And of course: “Oh my God, have I wasted my entire life?”

I was about to lose myself to this particular professional abyss when the odd, blue light lit up the sky again. It wasn’t bigger necessarily. But it was brighter. Or maybe the rest of the world had gotten a little darker. And this time there was no mistaking that it was coming from outside the car.

And like so many things at that time of night, it felt mysterious. Foreboding, perhaps.

Something I couldn’t quite place.

Working for a church—or in a religious publishing environment, as I now do—allows the theologically-minded opportunities to discuss God in various ways that would be impossible in secular jobs.

Recent discussions in my office have included: Did Jesus know he would be resurrected? Is an open communion table supported by scripture? And which is the best boy band? (Okay. That last one wasn’t theological, but it was very amusing. My colleagues landed on Backstreet Boys.)

While enjoyable, these discussions tend to float toward—at best—adiaphora. And at worst, they manifest as a sort of elitist theological wankery that eventually becomes so disconnected from the real world, any “answer” we land on becomes meaningless.

At this time of year, one topic will inevitably rise up above all others to claim the mantel of theological smugness: The importance of Advent.

Now, I admit to having big opinions on this topic. Namely, it annoys me that Advent barely registers as a blip in the post-Halloween sprint to the manger. I’ve rolled my eyes more than a few times upon hearing people say things like, “It’s the Christmas season!” in the first week of December.

Because it’s not the Christmas season until, you know, Christmas.

This is always said passionately and, naturally, under my breath.

I drove deeper into the night, the blue haze seeming to grow dimmer and brighter without reason or provocation. When it would disappear, it felt as if I’d lost something. And when it suddenly came back in, I was filled with irrational excitement. Yet, it came no closer, no matter how fast I drove.

It remained nothing but a temptation. Something in the distance.

Despite my opinions on the importance of Advent, I often feel conflicted when the importance of the season is addressed in conversations with friends, on social media, or even in the pulpit. Too often it feels like an admonishment to those who aren’t familiar with the church’s calendar. And for those who are, it becomes a secret password to a club that is only accessed with advanced theological degrees.

Given the state of discourse in the country and world, the tenuous use of theology and scripture, both of these feel like a failure.

The point of having people acknowledge the season of Advent isn’t about being right (although, I am generally a fan of such results), but instead about leading people to a more substantial and meaningful Christmas. To wake up on that morning and be filled with joy, wonder, and possibly even mystery.

When I finally saw the tree, it appeared violently in the darkness, lit up in a blue so bright that I could barely stand to look at it straight on. There were no houses around. No source of power. And most importantly, no other decorations. Just this single tree, probably fifty feet in height. Burning like fire on the side of an empty Iowa highway.

I slowed to a stop, unable to look away.

The power of Advent is in the reminder that we can still be surprised. Knocked off our feet in such a profound way that when we stand up, we’re changed. Utterly transformed. It’s believing in the least of these. It’s waiting for a flip to the power structure that is so incomprehensible, we celebrate it and chase after it thousands of years later.

Most importantly, we’re given a chance to live in a brief moment of not knowing, when all we can do is sit in the darkness, expectant and waiting, praying for any slant of light.