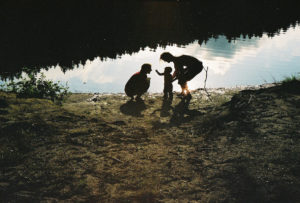 My wife is holding my hand to her stomach, gently gliding my fingers just beneath her ribcage where two small feet have been kicking against skin. She is thirty-two weeks pregnant with our third child, due in early December, an Advent baby.

Sitting on our bed, she guides my hand as if across a globe, across the smooth curving surface and down below her navel where our child’s head presses down. Every few seconds, we feel the rumble of small hiccups. Once again, our entire world trembles in expectation.

What child is this? The first line of the popular carol is perhaps a more polite way of asking, Who is this odd creature, this small stranger coming to stay in our home to dwell among us?

At dinner one night in the spring, we tell a close friend we are expecting a baby before Christmas. She smiles, gives us hugs, then laughs and says, “So, you guys finally agreed that you wanted a third kid?” My wife smirks and quips, “We did that night.”

It’s not that this child was entirely unplanned or unexpected. We were open to a third. We were not not trying. But the pregnancies of our first two sons were exquisitely planned, excruciatingly planned. We planned their births in conjunction with graduations from grad school, moving houses, changing jobs. We used graph paper to scrawl timelines by the month. We were fortunate to have no trouble getting pregnant.

Now, with a seven-year-old and three-year-old, we felt confident that we had mastered the art of planning our lives, of arranging our goals, our resources, our little economy just so.

We had settled, so I thought, into a season of slowing down. Less doing. Less planning. More contentment with what we have, confronting our insatiable wants and perceived needs. Less adding. Fewer ladders. A dismantling of all the white picket fences still lining the unexamined boundaries of our minds. A season of comfort, of good enough.

So when my wife came home one evening and pulled that little plastic pregnancy test from her purse, it was as if someone somewhere yanked the corners of the rug beneath me.

Now it is early morning in late September, the beginning of the third trimester, and we wake to the sound of claws clicking across the hardwood floors as the dog runs out of our bedroom. Then our bed begins to shake. We sit up and look at each other, assuming at first that the other is doing the shaking. No, the house, the whole house is shaking. It continues, this subtle shuddering of everything beneath us.

An earthquake, here in Kansas City? No, not quite. Just the distant ripples of a 5.6-magnitude earthquake in Pawnee, Oklahoma, 300 miles away, a quake brought on not by a deity’s wrath or shifting plates, but by the side effects of fracking natural gas from beneath the earth’s surface. Eventually the bed, the house, the earth stops shaking. We are wide awake.

Early October. Weeks away from the due date. My to-do list is long. Can’t sit still. I’m repairing the wall near the back door where the dog scratched through. I’m turning over garden plots for winter, clipping branches over utility lines. I’m huffing through the house, seeing the tasks remaining, seeing papers to be filed, sink of dirty dishes, living room I swore would get a fresh coat of paint the month before. Seeing the bedroom with the broken ceiling fan, crayon markings on white trim, the dip in the floor where foundation joists have begun to sag.

The season of good enough has gone missing. And there is good cause for deep concern, both in the small confines of my little economy and in the mess humanity has made of our created world and our life together.

Paul writes in Romans, “For we know that the whole creation groans and suffers the pains of childbirth together until now.” But what to make of this ancient metaphor, creation groaning in anticipation of new life, now that creation’s groaning and suffering seems to follow our anxious upending of it?

A faith tradition that emphasizes the salvific nature of the coming Christ, yes, but what of the mess we have made of the only home we have for welcoming infant kings? Are we awaiting the arrival of the Christ, or simply waiting for someone else to clean up after us? What is the difference?

What child is this? The question seems to insist on interrogating the identity and nature of the expected guest, rather than the condition of the place that will receive the guest.

My wife calls me over to where she sits on the couch. The windows are open on this late October evening. I hear our boys playing outside with the neighbor kids. I move a pile of half-folded laundry from the couch and sit down. She tells me, she reminds me that this, this is good enough. Come rest a while. There’s room here.

The floor sags but the house will hold. The dishes can wait. She holds my hand to her stomach again. She has been here before. She knows the groans, the pains to be suffered; though she would say suffered isn’t quite right. Endured, perhaps, or worked through. She also already contains, holds within her, that which she will give birth to—something I can neither experience nor understand.

There will be hard work ahead, harder days. There will come a time for groaning and suffering the pains. But there will also be the quiet song between mother and child, afternoon naps spent skin to skin.

Andrew Johnson is the author of On Earth As It Is (2017 Possum Trot). His writing has appeared in Crazyhorse, Guernica Daily, MAKE, Ruminate, Sonora Review, Killing the Buddha, Hobart, and elsewhere. He received an MFA from the University of Missouri—Kansas City and is the director of Pilgrim Center. He lives in Kansas City, Missouri with his wife and three children.