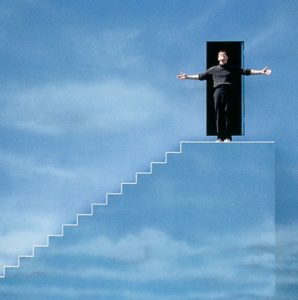 There are, arguably, many ways in which we need to wake up, hence the need for the variety of stories in this list. Some of these films (Something, Anything; Marty; Punch-Drunk Love) involve meek people waking up from lives dominated by peer pressure and social expectations from their friends or family. Other selections on the list (Joe Versus the Volcano, Cléo from 5 to 7, Knight of Cups) involve waking up from a single-minded preoccupation with self and the problems of self.

In both Ikiru and The Trial, a hellish quagmire of bureaucracy and legalism provides an overwhelming sedative that threatens the lives of both Watanabe and K. How does one manage to cultivate human flourishing in an impersonal world of regulations, rules, and paperwork?

By contrast, as Rick in Knight of Cups, Travis in This Is Martin Bonner, and Malcolm X’s protagonist all must learn, a wild life of avoiding responsibilities can be just as spiritually sleep inducing. When Malcolm X turns from a life of rule breaking to a life of rule keeping, he finds that dogmatism can also be a form of sleep.

In Red Beard, we see Yasumoto concern himself with wealth and social status. In Something, Anything, we watch Peggy decide to give up her high paying job. Both Yasumoto and Peggy learn something about how suffering, pain, and evils in the world can take away one’s awareness of the good. But, having lost that awareness, one can, one must still have a remedy.

The question is how. When we watch Cléo in Cléo from 5 to 7 become preoccupied with her own death and suffering, can we blame her? Is there any reason to condemn Watanabe for turning to drink in Ikiru? What is the answer in the face of overwhelming suffering?

Jack’s mother in The Tree of Life, grieving for the death of her son, asks for an answer. She is not given a simple one. Instead, the answer is only hinted at, but it is hinted at with beauty and power. Instead of didactics, great film directors like Terrence Malick and Akira Kurosawa offer illustration. This can come in many forms, such as the light that enters Watanabe’s eyes when he sees real meaning in his life. As both Ikiru and The Tree of Life show us, what you can wake up to may not be completely understood, even by you. It may be mysterious. But it can also be enlivening, enriching, poetic, and a cause for deep joy.

It is also important to acknowledge that sometimes waking up isn’t pleasant. Pain and darkness may be the realities that one wakes up to. In Pan’s Labyrinth, Ofelia begins to awaken not only to the evils of human beings, but to the powers that may lie behind these evils. But such an awakening does not equal a loss of hope. In fact, by awakening, Ofelia herself gains a power, and that is a power to do good and to pursue that which is greater than herself. When Louise’s perception of reality changes in Arrival, what she perceives is painful. But she also makes a choice. She chooses to love another person. This choice, made in the midst of an awakening, is the kind of choice that we need more stories to explore.

The other lessons here abound. Social activism itself for good causes can also turn into a self-centered, unhealthy pursuit (The Insider, Malcolm X). While sex and appetite can deaden one’s soul and one’s senses (Knight of Cups, Spirited Away), it is still possible to wake up to the genuine pleasure of embodiment (Wings of Desire), to the joy of sensing the wonder of creation (The New World), and to romance beyond one’s wildest dreams (Marty, Joe Versus the Volcano).

Additionally, as in Pan’s Labyrinth, there is also the potential of awakening to otherworldly or sacramental meaning. From very different points of view, films such as The Double Life of Veronique, Spirited Away, Close Encounters of the Third Kind, The Secret of Kells, and The Tree of Life all offer different explorations of the otherworldly.

In our present time, we need to awake to the connections that we cannot see, to the realities that we cannot always sense, and to the telos that often exists outside our own experience. This becomes, as Louise shows us in Arrival, a question of attention. Attention is a matter of culture and consciousness. Our culture and language have already formed, shaped, and limited the way in which we think. We need to become aware of those limitations.

Some storytellers suggest that it is possible, like Pocahontas in The New World and like Damiel in Wings of Desire, to cultivate careful habits of attention. Awakening can be a process of learning how to give attention to those things in life which truly matter. Whether this heightened perception includes an increased knowledge of one’s own fallenness (like Jack in The Tree of Life) or an awakening to the beauty of the created world (like Joe in Joe Versus the Volcano), the result is to be awake rather than to be asleep, to be conscious rather than not. Owen Barfield wrote that the ability to perceive meaning is ultimately what makes us conscious, and that being conscious is largely dependent upon the choices of the perceiver.

The perceiver chooses what to give attention to and what habits to cultivate. These choices shape what we can perceive. Our assumptions can therefore shape how we see the world and others in it. When you are asleep, you don’t know it. To awake, what you need is to open your eyes and see what is already there. As Susanne Langer wrote: “Most new discoveries are suddenly-seen things that were always there. A new idea is a light that illuminates presences which simply had no form for us before the light fell on them.”

What we desperately need now is the light to illuminate the good, the true, and the beautiful things in life that have no form or existence for so many of us. Yet these things are real and they can exist for us. To that end, the Top 25 Films on Waking Up will have succeeded if some viewers will take it as an example of the kinds of stories that can point to that light. Almost every awakening by a character in this list awakens to truths and realities that are already there. Like The New World’s Pocahontas, you just have to know how to see.

When explaining how he believed that we can readjust our default settings, David Foster Wallace described this waking up as a “simple awareness—awareness of what is so real and essential, so hidden in plain sight all around us, that we have to keep reminding ourselves” of it. This is how we “stay conscious and alive, day in and day out.”

This list of films was created in the effort to begin cultivating and practicing that kind of awareness. Let us continue to pursue stories about learning habits of attention that can awaken us. We certainly need them now.

See the ArtsandFaith.com list of Top 25 Films on Waking Up here.