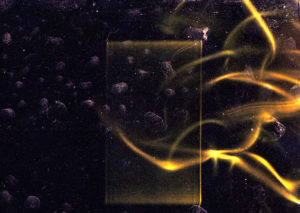 Karen An-Hwei Lee lays out her poem “Meditation on Soteriology” so that it looks at first like prose. But you don’t have to read far before you see the wild conjunction of images as poetry. “Paradises of flora and flame,” for instance, takes us aback, since we’d expect to read “flora and fauna.” Similarly with “psalms of untilled / ardor”: we expect a noun like “earth” or “land” to follow “untilled.” The Russian poet Osip Mandelstam wrote that “poetry shakes us awake in the middle of a word” — which is exactly what Lee is doing here. We’re shaken awake again by the “inklings” at the start of the second verse: though “inklings” are “hints, suspicions,” the word here leaps back up to the “fevered inkstone” a few lines above. And all the while, the poet is “wishing”: she sees the world as it is and wishes for something closer to salvation. Her epigraph—poet Denise Levertov’s line “The poet is in labor”—comes to fulfillment at the poem’s end, where the poet’s work merges with Christ’s salvific work on the Cross.

__________The poet is in labor.
______________—Denise Levertov
_______I confess the obvious, my inadequacy to translate
famine to bread to feed all the hungry children on earth.
Wish I could invent a happiness machine or dollar tree
blossoming with nontaxable revenue for small businesses.
Wish for a thousand bitcoins, wild doves of aqueous tongues,
non-walled paradises of flora and flame, psalms of untilled
ardor, testimonies on fevered inkstone. Inner voice says,
Aren’t you asking whether there is a soul
_______________________or whether souls may be saved?

Wish I could do more than arrange inklings into lines,
whisper God’s love into our millennial vanity as labor.
Wish I cobbled heels of solace at funerals for mothers.
In a vision, Jesus is younger than I am now, bleeding
on iron pikes driven to bone. See a letter in the shape
of a T-square, pin on pin. Wonderful how he fulfills
his divine assignment, what he is called to do. Night
drops like a black lily—
_____________________the labor is finished.