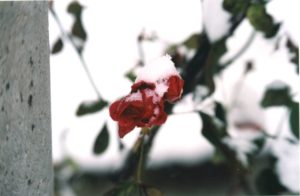 Maria walks amid the thorn

Maria walks amid the thorn,

Which seven years no leaf has born.

—From the hymn “Maria walks amid the thorn”

Sometimes there is a song underneath the deepest silence.

In the birthing room, I went to that place where there is such quiet that the air almost rings and hums. The song there was intermittent, like the splashes of the water in the birthing tub as I tried to find a position that was comfortable.

For some time, I floated in that place of singing silence, gathering up the courage to let my body do what it must.

But the silence only lasted until the baby was ready, and then the room was wrapped in the noise and cries of two bodies screaming to be unfettered, a baby and a mother, finally ready to let go of one another. The release was full of pain, relief, and joy.

It has been like that with all four of my babies, such a relief when the pain ends. But, there in the cacophony of this delivery is another kind of pain too. Pain that is only just beginning.

My own mother told me once about old home movies from her childhood. A blonde little darling, the only girl of the family, my mother said she was crying in most of them. Her father, well acquainted with suffering, had returned from being a prisoner of war in World War 2 to marry his high school sweetheart and create a family: my mom and her brother.

When they watched those home movies as a family, my grandfather would say teasingly of my mom, “She’s never really been hurt. She doesn’t know what that’s like. So, she cries over everything.”

Nearly a decade ago when I gave birth to my first child, I’d never really been hurt. Yes, I’d experienced loneliness, depression, and melancholies of my privileged kind of life. But I hadn’t yet faced the pain of things that so many face so much earlier: transition, loss, betrayal, grief, and death.

So, as my fourth baby, a son, was born into that birthing tub this summer, eight years after my first baby, I couldn’t help but wonder what loss and grief would come as we grow.

I think about a mother’s grief in Advent when we celebrate the woman who gave birth to God. In Catholic tradition, Mary is called the Rosa Mystica or the “Mystical Rose.” In the nineteenth century, Cardinal Newman said this of Mary, “’But a rose has thorns, as so had the Mystical Rose—the sharpest for herself alone; so she could have compassion on our infirmities.”

As a young maiden, Mary might’ve been wise in her innocence, accepting the ludicrous announcement of an angel, choosing to be the vessel of the one, long-awaited. But she probably didn’t stay that way. Her rose-like youth gave way to a thorny suffering, almost immediately.

She braved false accusations. She bore that bumpy road to Bethlehem: ankles swollen, legs cramping, breathless, and aching. She gave birth away from home, away from the women who should accompany a young girl at such a time. Then she fled across borders in the night, running to save her child.

I wonder sometimes if Mary ever regretted her decision to become the mother of God. The Gospel of Luke says that she paused when Gabriel announced the Lord’s favor upon her: “But she was greatly troubled at the saying, and tried to discern what sort of greeting this might be.”

Even in her youth, she sensed that this decision might break her. When she watched her son writhing in pain on a cross, did she think of that angel’s blessing? Was she tempted to curse that angel of God then for the way her son suffered? It certainly would’ve been understandable.

Mary knew so well that every child brings grief to his mother. Not because he will necessarily misbehave (although he might) or that he will die (although that could happen too). But because, eventually, we will be unfettered from our children, again, and it may feel like breaking apart.

Mary reminds me of all of the mothers who have lost their children to war, famine, addiction, and disease, of the ones who experienced the deep loss of wishing to have children and never being able to. Mary also reminds me that Christ—“the only begotten Son of God, begotten of the Father before all worlds; God of God, Light of Light, very God of very God; begotten, not made, being of one substance with the Father, by whom all things were made”—was also just Jesus, the man of sorrows who spared a dying breath for the mother who shared his blood.

In Catholic tradition, Mary’s thorn gave her compassion for all who suffer such loss in the midst of such beauty. She takes the mantle of grief from Eve, the first mother of the world, who was swept up into the brokenness; she felt her fingers bleed from the first thorns that sprung up from the earth that she and Adam toiled. Mary brings light to the world, and healing to Eve. She carries the grief of the world for all of us.

And what are we to do as we wait for the Light of the World to come again this Advent?

Maybe we can meditate on the ringing quiet that comforts even in the most desperate and painful of moments. And maybe we will find that the song that hums underneath the quiet sounds a little like Mary’s song, and our spirits can rejoice in the God who is being birthed again out of the silence and noise of that unfettering.