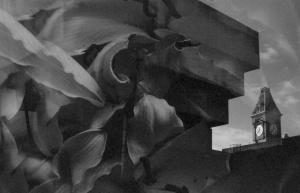 In a recent interview about some stories I’ve written, the interviewer asked several questions regarding film. One in particular was thought-provoking: whether the medium of the motion picture provides more fictive metaphors, more imaginative opportunities for use in stories and novels than other artistic means.

That is, does the motion picture qua motion picture, with all of its “takes,” and “cuts,” and “angles,” and “storyboards,” and all of its surrounding glamour and artificiality, provide a world more likely to stimulate the writer’s attention? Are there more stories and novels that use the movies for a creative minefield, as it seems there are, than tales that use theater, or opera, or dance? Save Shakespeare, who had his own meta-dramatic thing going on, does the silver screen just naturally lend itself to the story?

I gave a positive answer to that question, as memory serves, but I haven’t stopped thinking about the question ever since. These ruminations were also stimulated by a recent viewing of Kenneth Branagh’s remake of Murder on the Orient Express. I had always been fond of the original classic film from 1974, with Albert Finney as Hercule Poirot, so went with mild trepidation to see this new effort.

The remake put me in mind of a story in Some Bore Gifts, a collection I have out now, that concerns an aging actress who has been offered a cameo role in the new version of a classic movie in which she’d starred (“Cameo,” originally published in the St. Katherine Review). Her turmoil over whether to take the small part makes up the tragi-comedy, but her protestations about the film being remade at all provide her the greatest angst.

She wonders about the propriety of such a thing: You don’t remake things that were done well. You only remake failures. At least that’s her point, which stems from the view that the great film is like a great palace, or sculpture, or painting—you don’t disgrace it by trying to copy it; or if you do, have sense enough to sell it only on the sidewalk outside the museum.

But then, that point itself is provocative, is it not? For why do some artistic mediums beg for new versions of the same things, while others seem to forbid it?

Why do we compare versions of Hamlet, or Swan Lake, or Aida, and make no objection to the doing again of what has been done before, even done magnificently before, on the same grounds that we complain about new versions of films?

While it may be that second tries rarely compare favorably to the original (True Grit is classic in both versions, if you ask me). That Callas sang Nessun Dorma doesn’t mean that Jessye Norman can’t, but fits are pitched when films are remade—not at the quality of the work, but at the very attempt.

It seems that films are more like the plastic arts in our minds. Film, like sculpture, is not live, as the theater and staged operas are. Films are less a performance than a recording, and as such wind up being just what they were originally said to be—a picture—a moving picture. Just like pictures, we do indeed say that one good rendering stops all others. You don’t paint the Mona Lisa twice. If you do, you’ll be criticized for it unless you offer it only as a copy.

Film is capable of manipulation in a way that nothing live is. No matter what a stage director or lighting director or costumer can do to Hamlet, it can’t come near the special effects or cuts and splices and montages of film. The director is making a thing that moves, but in the end, the product is something that can be viewed again and again, like a painting or a piece of sculpture—something that can be stepped back from and judged as a whole.

In contrast, the theater is a living thing. In the RSC’s Hamlet you are taking part in the play just as it was taken part in on the London stage in the Renaissance. It is vital, so much so that Hamlet would indeed bleed if you cut him. Not only is “the play the thing,” he is the thing that the play is.

In this way, the performing arts allow something as close to the mass as an objective correlative can come. For if I’m correct in my catechism learnings—the mass is not a recreation of the sacrifice, but the sacrifice itself. It does not happen again, but happens just as it always has—a great timeless existential act. I suppose that means it really can only be spoken of properly in the present tense—and is in fact spoken of just so—“This is my body”—“This is my blood.”

Hans urs von Balthasar made the foundation of his theology theodramatics, focusing upon the divine drama that we play within. There is much at play on those old boards—say for example, metaphysical realization of the highest order, not at all unlike what happens in the most hallowed of halls, upon the sanctified stage of the altar, at the ringing of a holy bell.