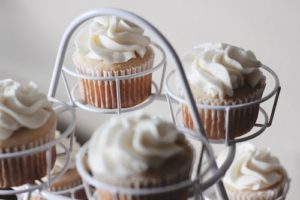 Quick: before 2017 ends, I want to mark an anniversary that has somehow been missed in the surfeit of commemorations that have rained like confetti all year long on the Internet.

Martha Stewart and the image of celebrity chef and stylist she represents has been so finely distilled that it wouldn’t be hard to imagine what a Martha emoji might look like—a blonde swoop of hair and eyebrows over a classic button-down shirt—and how much this simple symbol would signify.

For a certain slice of the American television-watching public, you can summon up the notion of Martha in just a couple of images: “Good Things,” hot glue guns, anything obsessively and meticulously handmade.

Martha went from praise to scorn in the country’s imagination roughly in the period 1987-2008—and that’s not counting her stint in a West Virginia prison for insider trading (which she handled rather gamely, actually).

There are the Martha defenders: Anyone who might consider using a toothpick to gouge crisscross lines in fondant to create a “Chanel-bag” cake is probably one, or even just someone who regularly consults Pinterest, where Martha has inspired scores of imitators.

But the greater number, by far, are Martha Stewart detractors. Take, for example, the common gag of bringing a store-bought dessert to an event and offering, “I slaved all day in the kitchen to make it.” As if, who has the time to cook like that? A backhanded comment—with the added, no-doubt true implication that Stewart herself is dependent on her own staff to make the magic happen.

But roll the clock back to 1982, when she was an erstwhile investment banker-turned-caterer in Westport, Connecticut. Entertaining is a first-person account of her own experiences, and guidance to home cooks to be more adventuresome in their efforts at hosting.

There are chapters titled “The Kitchen Party” and “The Dinner Party” and individual menus for “Cocktails for Eight to Twelve: Oriental,” and “Desserts for Forty: Soiree Dansant.” The Ouefs a la Niege in the dessert chapter is fantastic, and I still rely on the recipe for new potato salad flavored with vinegar and dill.

To look at Entertaining is to peer at an America where the common knowledge of eccentric spices and exotic flavors was more rarified, and the niceties of elegant table presentation were not one “life hack” video from accessibility.

It was in this volume I first learned as a teenager about Pasta Primavera before it became a staple of Bennigan’s menus across the Interstates of America. It was also the first place I ever saw a plate of raw vegetables, cut up and arranged and passed off as “crudités”—which you can even buy at the Wawa now, I think.

But it’s the photographs and design that really enliven Entertaining. The novelty of “fresh” New American cuisine had been launched with the 1979 publication of the The Silver Palate Cookbook by Julee Rosso and Sheila Lukins, but the original version had only very twee line drawings of the dishes.

Entertaining, on the other hand, was a coffee-table book, with glossy pages and color photographs of a kind rarely seen in cookbooks then—features that were to become hallmarks of publisher Clarkson Potter during the 1980s—and of every blockbuster lifestyle coffee-table book since. (My own brother is a book designer, and his good friend, writer Teresa Nicholas, was one of the Doubleday staffers who worked on Entertaining—full disclosure!)

Every bit as much as (Mississippian) Craig Claiborne’s The New York Times cookbook or Julia Child’s Mastering the Art of French Cooking (to say nothing of Peg Bracken’s The I Hate to Cook book) can evoke the fifties or sixties, Entertaining marks its territory in a moment that still looked like the seventies, but was clear that changes were afoot.

To wit: the endpapers of the volume are a deep red with a small calico print, and the photographs of Stewart’s Westport farmhouse reveal a colonial warren of dark rooms hung with baskets and bric-a-brac—the authentic inspiration of what would become known as the “country look” across the land.

And on the front is the startling portrait of Martha Stewart herself. Forty-two at the time, she’s poised over a formal table with orange and yellow poppies and turquoise glasses that might be au courant at ABC Carpet and Home. But what’s endearing is how unenhanced, un-made-up, un-TV she looks, in a white Victorian dress that’s a little crumpled, and still-light-brown hair that is not blow-dried within an inch of her life.

She looks like somebody real, in other words—not computer generated, not reproduced in infinite pixels.

Around this time, she catered the wedding reception of my house counselor at boarding school—and when I look at the pictures of the “At Home Wedding” chapter that crowns the end of the book, I think of Kit Washburn in spaghetti straps on a New England lawn.

That was before TV came along and made fools of us all. But let’s raise a glass to Martha, who has weathered it all, and ring in the New Year with “A Midnight Supper Omelette Party for Thirty.”