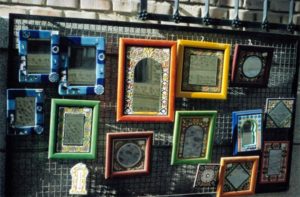 Often when Aomame finishes showering and prepares to dress, she stands naked before a mirror and considers her body. It is an athletic body, toned, if thin. She always wishes her breasts were larger, but thinks, quite practically, “You’ve gotta work with what you’ve got.”

Haruki Murakami’s character in 1Q84 is not vain so much as meticulous. Being meticulous pays in both her official and unofficial professions.

Looking in the mirror is difficult, whether physical or metaphorical. I am at that age when I am sometimes surprised to see how old the man in the mirror looks. Who is that? Is it really me? Then who is it I see when I imagine myself?

As a freelance copywriter and ghostwriter, I constantly look in the mirror and demand it tell me what I am, what value I have to offer others. I’d much rather help other entrepreneurs define their businesses; they always seem so clear to me.

I’m certainly not as meticulous as Aomame, but I, too, have a stern voice in my head saying: You’re not good enough. You don’t deserve it.

My therapist seems doggedly uninterested in family of origin issues. It’s like mirror-gazing; of course you’ll find something wrong. Better to recognize the voices and replace them.

But how they scream in protest when I hear that common refrain of entrepreneurs and therapists: Pursue your passion. Ask for what you want.

When you want something, you must believe it is good if you are to survive being denied it. Like when I attempt to connect with my wilful children. The oldest is likely to scoff, “Who cares?” or “Leave me alone.”

It turns out my life goes on just fine when he does this, and I still believe it is worth the attempt. Sometimes, even, I break through, and my kid transforms from an impenetrable tank into a cuddly puppy.

The whole world seems transformed in the process.

What if what I want, though, is to write?

I’ve been stealing the time to write for years. This seems a common experience among creators. Writing as a form of stealing, something selfish or antisocial.

Claire Dederer even calls it monstrous. The act of amassing small selfishnesses into a work we call a book or a film or an essay. What makes you so important that you can neglect the children, the housework?

If a friend felt these things, I’d tell her to ignore the voices, to claim the time to write.

On the shelf at the used bookstore: The Right to Write. A silly pun with a heavy burden of dignity and entitlement. I couldn’t buy it. The right? Now that sounds monstrous.

But the author, Julia Cameron, rejects all this vexation about monstrosity and antisocial behavior (thank you, Google Books preview). Writing should be joy, she says. The writer’s life can look like the carpenter’s or the banker’s. Writing isn’t about being A Writer but “an act of listening and naming what we hear.”

Yet, if I were to stand naked before the mirror like Aomame, I could not avoid finding problems any more than she does. Too fat. Too hairy. Too gray.

In other words, monstrous. And monsters do not deserve good things.

Dederer’s essay confuses moral monstrosity with breaking social conventions, so her self-reflexive question, “Am I a monster [for stealing the time to write]?” lacks the depth it might have. Ask Victor Frankenstein if creation has merely social consequences.

In an episode of Penny Dreadful, the Devil appears to Vanessa Ives in the form of her best friend’s father. She had spied this man and her mother having sex in the hedge maze. He represents not only authority but transgression and experience—and thus (in the young Vanessa’s immature imagination) desire.

What if Art, or the Beautiful, could become a diabolical object, the illusory incarnation of our deepest desires? Is it so difficult for the icon to become an idol?

It is not good is the converse of You don’t deserve it in my psyche. As if Art were both the object of desire and the transgressor against my masochistic superego.

The devil need only hold up the mirror. We’ve already convinced ourselves that it shows us the truth. We are—or I am—already prepared to see a Dorian Gray portrait reflected back.

How do we counter the devil’s reality except by art—that is, by something better than a mirror? How else but by disciplining the imagination to see how the light shines in the darkness, but the darkness, though it scoffs and chuckles and gives an urbane shrug, does not overcome it?

It is not monstrous to create. Creation requires soul, and monsters have no souls.

Monstrosity, so I read, enters when you impose your ego upon the world. The author’s job is to tell the truth.

Truth is neither the mirror nor the reflection nor the subjectivity of the reflectee.

It is not that Aomame’s breasts are or are not adequate or even how she feels about them but how her love for another character orders her life.

At least, so it seems to me, because art is not about creating the object of desire but becoming it. Becoming the creator that the work needs in order to be born.

Becoming, perhaps, the mirror it needs in order to be seen.

Creation is divine; of course the forces of evil will war against it. But the one who calls us to create is like Aomame’s lover, who tells her, “If they were any bigger then it wouldn’t be you.”

If you were any different then it wouldn’t be you.

Voices and all. Now, write.