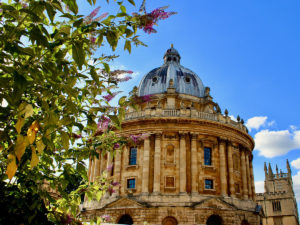 Reynolds Price slithered onto the American literary scene in 1962. “Just with his body and from inside like a snake,” Wesley Beavers drove his motorcycle and his girlfriend Rosacoke Mustian into the 189-word sentence that opens A Long and Happy Life.

The title of Price’s first novel was prescient for an author whose career spanned five decades and left us with forty books of essays, plays, poetry, stories, and translations. Born in the thick of the Great Depression, Price grew up in a small town in North Carolina named for an old Republican Speaker of the United States House of Representatives. He went from Macon to Duke University, and then left Durham for three years at the University of Oxford as a Rhodes Scholar.

That is where Price’s life meets mine. I left for Oxford on a Rhodes Scholarship from Harvard, and my Macon was a small map-dot town on the Eastern Shore of Maryland called Cordova. Both of us were public school scholarship students at prestigious universities. While Price had published in Duke’s literary magazine The Archive, I ran Harvard’s undergraduate magazine The Advocate.

It was a flattering comparison for a twenty-year-old farm girl from Cordova to be compared to the great Reynolds Price when folks first started making the association, but what surprised them was when I said I respected him more as a Christian than I did as a novelist.

Somewhere between C.S. Lewis and Dorothy Sayers, Price made a name for himself as a novelist, but also wrote several books on Christianity: translations of the Gospels and the Old Testament, essays on theodicy and ethics, and a memoir of suffering and healing. I had read a few of Price’s novels, but I loved his translations of scripture. Most who compared us to one another had paid little attention to those.

Raised a Methodist in North Carolina, Price befriended the Anglican poet W.H. Auden while at Oxford, where he was studying Milton. From outside my supervisor’s office at Christ Church, I could see the little stone cottage where Auden had lived. When I was supposed to be thinking of Augustine and Barth, I thought often of Price scrambling from Merton to meet the fastidious poet.

And when I sat at my little writing desk in Magdalen, looking out the window at where Dylan Thomas lived and wrote his careful poems, I wondered about the sort of haphazard meetings that Price had during his years at Oxford. For me, like Price, those years abroad were blissful.

The last book that Reynolds Price published before his death in 2011 was a memoir called Ardent Spirits: Leaving Home, Coming Back (2009). It tells the story of Price’s journey from North Carolina to the United Kingdom and back again, a six-year period in the middle decade of the century. Those years, Price wrote, were filled with “intense stretches of the rarest human privilege—prolonged joy.”

My years at Oxford were also fringed with joy and speckled with faith. Reading Ardent Spirits, I realized how similar our years were. I never bought a Volkswagen Beetle, but a dear friend bought a Renault hatchback that took us on adventures round the United Kingdom and, once we mastered the Chunnel, mainland Europe.

My star-studded stumbling included complimenting the spirited purple tie of a Supreme Court Justice, having lunch with Her Majesty the Queen, passing snuff to an American senator, explaining that my sister the veterinarian did go by “Doctor” to South African writer J.M. Coetzee, and praying at evensong with His Holiness the Dalai Lama.

Rhodes Scholars no longer sail to England, though we do still convene for an anachronistic Bon Voyage Weekend before leaving.

Both the food and the heating had improved considerably by the time I arrived. I found that the usual complaints from Americans did not apply, for I was entirely happy there in the Eden of academia.

Even now, when pressed for some critique of those years, I can only say how uncomfortable I was to have a “scout” clean my room. I had read Evelyn Waugh’s Brideshead Revisited, but was still unprepared for the lovely woman who came every week to change my sheets and take away my rubbish.

Scouts appear in Price’s memoir, as do a few porters, the security-types that protect the colleges and handle some administrative tasks. I loved the porters at Rhodes House and Magdalen College, whose only context for my hometown was The Waltons. They cast me as a sort of John-Boy, and whenever I had my mail forwarded over term breaks, the address label would read: Walton’s Mountain, c/o Ike’s General Store.

Like Price, my years at Oxford were filled with learning, love, and travel. We each, I think, found our vocations in the city of dreaming spires. Although I was also at work on a novel during my time abroad, I found myself called to the chapel, discerning a call to ministry.

In 1978, after having written five novels, Price produced a curious book called A Palpable God. In its introduction, he wrote: “I found myself turning with increasing frequency to something new and strange—literal translations of short, almost blindingly lucid Bible stories.”

Price’s exercise in translation brought fresh versions of thirty familiar stories from scripture: the Akedah, Joseph and his brothers, the sacrifice of Jephthah’s daughter, and the raising of Lazarus among the best. Price taught himself Koine Greek to wrestle with the New Testament and relied on various literal interlinear versions of the Hebrew Bible.

One imagines Price buried beneath commentaries, lexicons, and all available translations for eight years as he labored to choose the words that became his version of scripture. I was buried under those same tomes at Oxford, which explains why I am still more drawn to Price’s non-fiction than his fiction.

This post originally appeared at Good Letters on January 3, 2013.

Casey N. Cep is a writer from the Eastern Shore of Maryland. Follow her on Twitter @cncep.