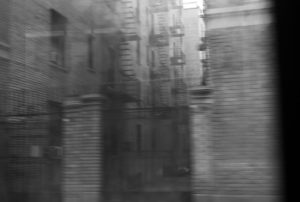 My Frankenstein is first and foremost a novel. A custard-colored Pound Classic published by Penguin UK, to be exact. Though I’ve taught from several editions, as the novel turns two hundred it’s to that tiny, flimsy volume with which I first made contact that my thoughts turn.

My wife and I were in Oxford, England, for six months, during which time we saved what we earned each week for travel on the weekends. That meant many nights in the Borders Cafe on Cornmarket Street sipping cheap red wine and reading books off the shelf. It was there I read much of Austen, some Hardy, Eliot, and, eventually, Dickens. It was there I picked up one of the world’s most famous horror stories, written by a teenage girl at the beginning of the nineteenth century.

All I knew of Frankenstein was the pictures I’d seen of Boris Karloff, which means I was totally unprepared for Mary Shelley. The novel is surprisingly light in action, consisting rather of a series of nested narrations that trade immediacy for a certain documentary authenticity. If you pulled out all the descriptions of landscape you would probably reduce the whole by a tenth or more.

And the big moment? Bringing the creature to life? I missed it the first time. Victor had just realized that his creation was hideous, and then suddenly it was alive, and he was fleeing from the room. No storm. No lightning, No manic triumphalism. It’s a much more philosophical than horror novel in that way.

I was sitting on a ratty, dingy couch in the basement of the house we shared with ten other people in Temple Cowley when I read what, to me, is still one of the most striking and profound moments in all of literature. Victor, having hiked onto a glacier in the Alps, sees:

…the figure of a man, at some distance, advancing towards me with superhuman speed. He bounded over the crevices in the ice, among which I had walked with caution; his stature, also, as he approached, seemed to exceed that of man. I was troubled; a mist came over my eyes, and I felt a faintness seize me…. He approached; his countenance bespoke bitter anguish, combined with disdain and malignity, while its unearthly ugliness rendered it almost too horrible for human eyes.

“Devil,” he shouts, “do you dare approach me? And do not you fear the fierce vengeance of my arm wreaked on your miserable head? Begone, vile insect!”

And then, “I expected this reception,” said the dæmon.

The creature, this misshapen, soulless murderer, speaks. Victor doesn’t flinch, but begins to trade insults and accusations. Apparently we were meant to expect this, but it was totally unexpected to me.

Though she treats it casually, Shelley’s narrative suggests that language—not to mention eloquence—expresses soul. The fact that the creature speaks and can tell his story means that we can no longer accept Victor’s simplistic judgment of it. Of him. If anything, the creature’s story vindicates the irritation one feels with Victor for so much of the first part of the book.

Because his creature has speech, and a soul (or its trappings), Victor can enter into a dramatic, existential struggle with him. By contrast, the speechless monster of stage and screen is more akin to a rabid dog than to an evil double.

And because the creature speaks, and because of the story he tells, the novel, to me, is not so much about a monster as a dystopia. Not so much about the fear of our creations taking on a life of their own, like in I, Robot or Terminator, say, but of a possible future, of our own making, for which we are ethically unprepared. Think Blade Runner or Black Mirror.

It’s one of the few points of connection between Mary Shelley’s inherited atheism and her culture’s Christianity.

But what would it mean to have compassion, anyway? Would it be compassion for a human, or for some other thing? For a person, surely, but we lack enough experience with non-human persons to really know what that means.

It’s a sci-fi trope that persons of different species might be able not only to live peaceably together but to fall in love and procreate (something similar happens in the suspended reality of Bojack Horseman). It’s easy enough to propose it speculatively as a metaphor of overcoming difference, but Shelley doesn’t see it that way.

The difference in the creature’s origins dislodge him from our familiar human ethics. It’s wrong to murder, but is the creature blameworthy in the usual sense given the way he has been reviled and scorned? As far as he knows, he is not actually a human being; he has never been accepted as such.

The creature’s experience may be closer to a gang-banger’s than we’d like to think, and thus the powers that socially abandon a child from birth and leave him to fight or die are the blameworthy Victors. Like Milton’s Satan, when a person finds himself in hell, he might understandably lean in, embodying his demonism and attempting to make some kind of heaven of the place.

That’s the kind of terrifying thought Frankenstein inspires in me. Just as Satan only makes his hell worse, so the creature leaves destruction in his wake. So do we all when we war against our creator. The more we war the more just he is.