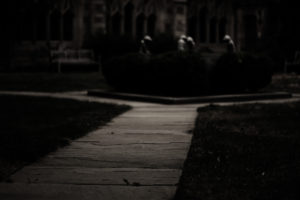 I often rock my baby to sleep at the witching hour. These can be the hours when thoughts, either darkly vivid or hazily formed out of interrupted sleep, stray to mournful or anxious things. But on this night, my mind is pleasantly occupied with thoughts of my beloved grandmother who died a decade ago.

My grandmother was the first person I knew who would read so late that it would often be early morning when she finally got to sleep. With one pair of glasses sitting atop the short silver hair she cut herself, and another pair on her face, she devoured her collection of The Cadfael Chronicles, the stories of a Welsh Benedictine monk who solved murders. I can still see the spines of that collection lining her white bookshelves, beside hardback copies of Readers Digest novels and Gone With the Wind.

I observed my grandmother’s nighttime reading habits from an early age and I felt they gave me permission to be a little irresponsible with reading and sleeping. But these habits come back to haunt me on nights when I’m rocking the baby.

The truth is, it’s not always just the baby’s fault that I don’t sleep much. After my four children have finally gone to bed, these peaceful hours in the dark are some of the only moments I have to read or write. And unfortunately, the baby often wakes up just as I turn off my book light.

Another evening, when my writing feels totally dried up (probably from lack of sleep) I text some friends to ask them for a writing topic for a piece with an impending deadline.

“Jesus. God. Motherhood,” Jessica texts back with a “laugh out loud” emoji. This is the literary equivalent of a child’s answer to every question in Sunday school.

Who saved Jonah from the big fish? “Jesus!”

Jessica’s final topic suggestion is the most appropriate because it is the reason I need help in the first place: “The rhythm of not sleeping,” she texts, knowing that this baby has been the worst sleeper of all my children.

It is seven months ago that I gave birth to my fourth child, just a few months shy of my fortieth birthday. Though a glorious blessing he was, this baby wasn’t planned. And when I saw those double pink lines, I was not at all ready to do it all over again.

Our two year old was finally sleeping through the night just about the time that pregnancy began dragging my body down. By this fourth go ’round, all the muscles and joints that hadn’t fully returned to their upright and locked positions after the last pregnancy felt free to flop right back down again, banging and bouncing as they did.

I got bronchitis in my third trimester. After weeks of sleepless, agonizing nights in a Lay-Z-Boy downstairs, sitting upright so I could sleep, despite the rib-aching coughing, I had to get an adjustment by a chiropractor, which, incidentally, started my labor.

Then, a lovely, squishy, wailing, newborn entered our lives.

He slept well the first two weeks when babies are generally so exhausted from the trauma of light, from the suddenly unmuffled sound, and the journey down the birth canal that they lull you into a false sense of calm. Then, we up and moved to another state, and lived in two different houses before settling in.

Other than a Christmas miracle, those first two weeks were probably the last full nights of sleep I’ve had in eighteen months.

I thought I’d become accustomed to not sleeping. But recently, I’ve seen links on Facebook to new studies by Swedish scientists about how lack of sleep causes Alzheimer’s. Or at the very least, it doesn’t allow you to make new memories.

Mothers everywhere could’ve told these well-meaning researchers that we can’t remember a single thing about the first year of any of our kid’s lives. So, yes, thank you very much, scientists, we already knew what sleep deprivation costs our brains.

I knew this when I left my car running for the entire hour I was grocery shopping but only realized it when I couldn’t find my keys in the checkout line. I knew this when my husband called me from home and asked if I’d meant to leave the front door standing wide open. I knew it when I stumbled over my words when I was trying to give my seven-year-old a “talking to” and when I couldn’t come up with a simple word like “appropriate.”

I knew it when I couldn’t think of a topic to write about for this piece.

This night I see another scholarly sleep study in The New York Times: “A pair of papers published on Thursday in the journal Science offer evidence for another notion: We sleep to forget some of the things we learn each day.” In other words, sleep helps us release some of the information we’ve learned in order to make room for new information.

But the article continued: When scientists tried to keep mice from getting rid of certain memories in sleep, they suffered the next day: “Without nighttime pruning, their memories ended up fuzzy.”

“You can forget in a smart way,” one of the smarty-pants scientists (who’d obviously done a lot of nighttime forgetting) concluded.

In my head, I try to retort with something clever, but, like those sad little science-experiment mice, I haven’t forgotten enough to remember anything to say. Everything’s a little fuzzy.

I return to thinking about my grandmother who seemed pretty smart, despite her late night reading, when she died at the age of ninety-three. I finish rocking the baby, get back in bed, and tuck into another book until my brain, desperate for new memories, drags me back into sleep.