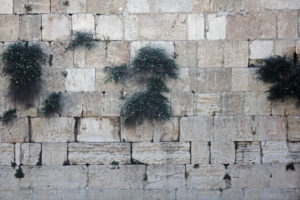 For a few years in the late 1990s, early 2000s, I brought a book of poetry with me whenever I went to synagogue for Shabbat morning services. After I was settled into my pew, I’d discreetly slip the book out of my tallis (prayer shawl) bag, tuck the thin volume of poetry inside the thick prayer book open in my lap, and, while the rest of the congregation prayed, I’d read poems.

While the congregation was chanting the opening passages of the standing prayer, Blessed are You, YHVH, our God and God of our ancestors, God of Abraham, I might be reading this:

We are all children of Abraham
but also the grandchildren of Terah, Abraham’s father.
And maybe it’s high time the grandchildren
did unto their father as he did unto us
when he shattered his idols and images, his religion, his faith.
That, too, would be the beginning of a new religion.

That’s from Yehuda Amichai’s poem “Gods Change, Prayers Are Here to Stay.” Maybe the religion handed down to us has become a kind of idol. Maybe we, following the example of Abraham, do need to smash that idol. Could that idol include what we’ve been conditioned to believe prayer is—why we should pray, how we should pray, to whom we are praying?

Don’t get me wrong. I wanted to be in synagogue. I wanted to be part of the community. Part of the tradition. I wanted to feel a connection to something beyond my narrow sense of self. And I wanted an experience that would shatter my ordinary way of thinking, feeling, seeing, and being.

But I wasn’t getting what I sought from the traditional Jewish prayers. So, while the rest of the congregation chanted the Shema, Ashrei, and Kaddish, I read Amichai, Osherow, and Stern. Their poems helped me escape, for a moment, the prison of the solitary, isolated self, and connected me to my people, my past, and transported me, by means of words, to an experience beyond or prior to words.

But what about God?

More recently, when I haven’t been able to devote the time to attend Shabbat morning services, I’ve been spending part of every Saturday morning in my study at home faithfully reading, before sitting on my cushion to practice mindfulness meditation, Abraham Joshua Heschel’s Man’s Quest for God.

For my Shabbat morning observance, I take Heschel’s book, a study of the inner experience of prayer, from the stack of books atop which it rests, a stack that, at the moment, includes Norman Fischer’s Magnolias All At Once, John Cage’s Silence, Sharon Dolin’s Manual for Living, and Edmond Jabes’s Book of Questions, and read:

To pray is to take notice of the wonder, to regain a sense of the mystery that animates all beings, the divine margin in all attainments.

Mindfulness of God rises slowly, a thought at a time.

We do not step out of the world when we pray; we merely see the world in a different setting.

Prayer is a spiritual source in itself. Though not born of an urge to learn, it often endows us with insights not attainable by speculation.

Prayer, too, is primarily kavanah, the yielding of the entire being to one goal, the gathering of the soul into focus.

The actual content of prayer comes into being in the moment of praying.

In prayer, as in poetry, we turn to the words, not to use them as signs for things, but to see the things in the light of the words.

Genuine prayer is an event in which man surpasses himself. Man hardly comprehends what is coming to pass. Its beginning lies on this side of the word, but the end lies beyond all words.

Though Heschel is describing prayer and the experience of praying, as I read I’m seeing connections to poetry, the experience of reading and writing it. A strong poem helps me regain a sense of mystery. The carefully chosen words of a strong poem enable me to see the world “in the light of the words.” When one is fully concentrated and absorbed in the process of composing a poem, one may receive “insights not attainable by speculation.” The end of a poem, some poems, “lies beyond all words.”

Prayer and poetry, poetry and prayer. They’re not the same, but as a practice, a process, they both may awaken a sense of wonder, they both may help us experience the mystery of whatever it is that is beyond or before language and the small self.

Open my lips, and I will sing. There’s an invocation, adapted from a line in the Jewish liturgy, that one could offer in the hopes of receiving and composing a poem that sings.

But the actual prayer, offered just before praying the prayer of prayers, the Amidah, the standing prayer, is this: Adonai, open my lips, and I will sing your praise.

Standing in relation to the ultimate Other, one’s sense of self may at the same time come more sharply into focus and diminish. Who knows what song, what poem, what story will come through one then in the “Presence of the Lord.” (Remember that track on Blind Faith, the lyric written by Eric Clapton and sung by Steve Winwood?) That’s the invocation for me, whether I’m standing or sitting, praying or writing or reading.