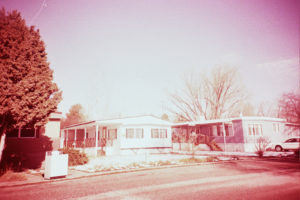 I am chatting with a woman in a clothing store as our conversation moves from friendly small talk to the anxiety of raising children. My conversation partner, who is a few parenting years ahead of me, is lamenting dangers that now seem rampant for children, ones her preteen will face the closer she gets to driving.

It’s something that most parents think about often. How do we protect our children in a world that seems so hostile? We are bombarded with real and horrifying stories about school shootings, online bullying, easily accessible pornography, and sexual abuse. With so much to fear, how are any of us willing to let our children out of the house in the morning?

It’s a conversation my husband and I have a lot. I’m generally the more fearful one. He wants our older kids to walk to the park by themselves and I worry not only about being visited by CPS when my unsupervised children are discovered walking alone (I mean, really, the park is only a few blocks away), but about them getting hurt or—worse—abducted.

I try to calm my fears by remembering the rational facts.

I express these facts to the woman at the store. The truth is, I tell her confidently, our children are no more likely to be abducted by a stranger than they were decades ago when the world seemed more innocent, at least to the privileged.

But she’s not having it. She gestures in the general direction of the highway, miles off, where she says sex trafficking rings roll across the state, just waiting to abduct children like ours.

I don’t know what to say. We’ve just moved here so maybe she knows something I don’t. And instead of calming her fears, now I’ve become frightened too.

A few days later, a friend posts a story about strange men who stalk mothers who are shopping with their children in big box stores. As the story goes, he follows them, attempting to snatch one child from a car seat while mom is buckling the other child in, trying to abduct kids for a sex trafficking ring.

I’ve seen this story online before, years ago in another state, set in another box store. But this isn’t how sex traffickers operate. A piece in the Los Angeles Times, written by Lara Powers, a professional in the anti-trafficking field, says that she has “never seen, read or heard about a real sex-trafficking situation in which a child was abducted by traffickers in broad daylight at a busy store under a mother’s watchful eye. It’s just not the way it works.” Traffickers, she says, pursue and groom vulnerable children, foster kids, neglected and marginalized kids.

Powers says that perpetuating these stories is actually bad for vulnerable kids because it makes it less likely that we will be able to spot the real sex trafficking victims.

Still, the factcheckers trying to debunk these myths aren’t always welcome. A recent study by researchers at the Massachusetts Institute of Technology says that false stories spread on social media exponentially more than true ones. And Powers says that her efforts to spread the truth about sex trafficking online “were met with anger and outrage.”

Why do would we perpetuate these stories, despite the facts?

Dare I say that as these stories circulate and morph, they feed something raw inside us, that there is sometimes a consolation in this creation of fear?

I’m well acquainted not only with the inner workings of my personal fear—how it catches and flames, burning in the chest, flickering down the spine—but with the way corporate fear swirls and spreads. We share these stories, warning one another, hoping, with good intention, to save that one child from terrible harm.

Fear is protection. If we can swim in it enough, letting it soak into our skin, then we can protect the people and things we love the most, right?

I don’t know. Maybe it’s just me, but sometimes I think part of us is comforted by the fear in our hands, stroking it like a small soft pet.

A nurse gives me a routine questionnaire for first-time patients while I wait to take my child in for a checkup:

In the past twelve months, were you worried your food would run out before you got money to buy more?

In the past twelve months, has your utility company shut off your service for not paying your bills?

Are you afraid your family might be hurt in your home or neighborhood?

Have you been hit, kicked, punched, or otherwise hurt by someone in the past year?

Even now, I tear up as I type out these questions, shaken because I am suddenly convicted of the selfishness of my own sad fears.

No, I’m not really afraid that my family might be hurt in my small town America, where our kids ride their bikes to the park, where the historic downtown is within walking distance, where the locals congregate at the football field every Independence Day to watch fireworks.

But, the truth is, even here, these questions are pertinent. The emotionless questionnaire asks only what is statistically true because it knows that behind the doors of small town life live the vulnerable whose lives have been upended by drug abuse, domestic violence, homelessness, mental illness, and generational poverty. People who might just be vulnerable enough to become the real victims of human trafficking.

Are you more afraid of your own sheltered children being abused than finding out which of your neighbors would answer “yes” to any of these questions?

That’s the real question I need to answer. And the answer I give could terrify me.