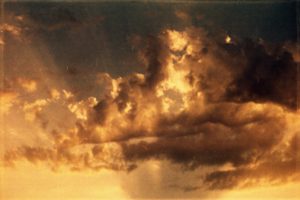 Throughout her poetry, Pattiann Rogers observes and describes the natural world with profound detail, compassion, and awe. In fact, Rogers will be awarded the John Burroughs Medal for Lifetime Achievement in Nature Poetry next month. In “Manifest, by Reason of Birth” she writes, “The universe / thrives / and pulses, rumbles and roars, sings, explodes, trembles and erupts.” From the “spinning arms of galaxies” to “the nucleic center of seed” Rogers celebrates the complexities and limits of our world and, more importantly, our ability as humans to bear witness to the beauty and mystery of it all. This declarative poem begs us to step back and embody her evocative conclusions. “We were conceived / within the creative throes of this universe, born composed / of its substance, possessed by its gripping intensity. We / hold / in the deepest marrow of our living bodies its legends of / light / and extinction.”

“Manifest, by Reason of Birth,” by Pattiann Rogers

Stars and the sun are not eternal. They flare. They wither.
The earth and its high mountains, its tors and spires, aspen
groves, scarred and broken bristlecone pines, torrential
blizzards, are not eternal.

Our universe,
our earth, is not static. Not rigid. Not fixed and mechanical. Not
dogmatic. It is dynamic, constantly forging and declining. It is snow-
filled hillsides of melting designs, summer winds shifting cloud
patterns, the coming and going memorandums of beetles and bees,
mayflies, mayweeds, may apples, weaving currents and waves
of flocks and grasses, shuttles and cocks.

The universe thrives
and pulses, rumbles and roars, sings, explodes, trembles and erupts.
Pulling and releasing, it gives life and takes back the dying, enfolds
the dead, while creating in the midst of this burgeoning terror
and pandemonium places of peace…night breath and a moon,
shadowy green dells, cavern hallways of silent rock, respites like these.
It keeps space for anonymity.

Today our human spirit can soar
by its own study and imagination into the realms of solar winds, into star
nurseries and the spinning arms of galaxies, into matter as light in a frozen
state, into those far territories of being.

We can explore the cell
of the egg and the hatchling, the nucleic center of seed and blood, move
into the microscopic realm of spiraling DNA, investigate the nanoworld
and the strange domain of the subatomic.

The origin and inner beating
heart of this universe is a mighty and shocking power, never fully defined,
never fully found. Yet faith in that creative power is more expansive,
more encompassing, more immediately present now than we might
ever have dared to envision before.

We were conceived
within the creative throes of this universe, born composed
of its substance, possessed by its gripping intensity. We hold
in the deepest marrow of our living bodies its legends of light
and extinction. We reflect its audacious existence. We echo
its canticles. We are its witness and its unity. We can be
its most grateful and best beloveds.

I believe the creative
energy of this universe and its promise are divine. I declare
our heritage holy.

This poem was originally published in issue 85 of Image Journal.