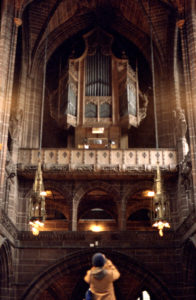 The band quit playing at church because our priest asked them to sing from the choir loft rather than the altar of St. Joseph in front of the sanctuary. They not only refused, they left the parish.

At the music ministry meeting, the guitarist had said, “We get energy from the audience. If we are behind them, it won’t be the same. We won’t play as well,” which is likely true.

If you see the worshiping Body of Christ as your audience, then yes, it will seem like a net energy loss when they are looking at Jesus instead of you.

The keyboard player said, “We started doing this over a decade ago to attract the younger people to church. I hate to think what they are going to do now.”

It was a painful meeting, full of hurt feelings and misunderstandings, one major misunderstanding being their perceived appeal to the youth: my own kids, teenagers, wretched in agony whenever they heard the band warming up before church. “We should have gone to Mass on Saturday,” they said.

Most of the band members were over fifty. Their songs were mostly composed in the nineties. No one in the parish knew the words to sing along. But whenever the drummer closed Mass with a drum solo, people applauded, hence it was presumed that the band enjoyed a great deal of popularity.

Technically, the band was quite good, and if the music were not so incongruous with the Latin chanting of our priest, I could see why some people might like them.

Ultimately, it was their call, and after exploring a few alternatives besides the choir loft and altar (one band member offhandedly suggested ripping out the confessional to make room for a performance space), they deemed that they’d been “squeezed out” by our priest.

This narrative, that they’d been treated inhospitably after so many years of service, was repeated over beers at the Knights of Columbus, over games of golf, in business transactions. I’m not an exceptionally “out there” member of our community, but I heard it over and over.

Church life can be treacherous. I tell myself this sometimes as a reminder that churches can chew you up and spit you out. As long as you perform a certain function the war will keep coming to you.

I recently had an interaction with a woman who was once very involved in adult education ministry. She didn’t like some of the changes our priest was making, and asked when was the last time anyone in parish leadership had been on a retreat. As it happened, I was chairing a committee to plan a retreat, and so I asked to meet with her.

She came to our coffee meeting cocked and loaded. How dare you attempt to meet a proven need in the church without consulting me? was the implication. So I asked her what she thought should be done.

It turned out that she did not want to help plan anything; she just wanted to be acknowledged for her numerous past attempts to improve the spirituality of this community. I listened while she projected many misassumptions about the nature of my faith and how I need to be further seasoned, more like her, which is possibly true. In any case, I agreed with her, and by the end, she reported that we’d had a productive meeting.

For my part, I left grumbling to myself about how people get the church they deserve: small minded, consumerist, vapid, bloated, and above all, powerless. Stupid meetings. Nothing ever gets done.

I was grousing in this manner to my friend on the phone who said, “The problem with looking for fruit in your spiritual life is that is has to be measured,” she said. “Fruits demand recognition. You’ve got to stand in the front of the church, reaping, or you are not happy.”

In the big picture, Jesus didn’t seek to be the fruit hanging on the tree, he sought obedience to God’s will, and it led to the cross, which is the downside of seeking obedience rather than fruit—and why so few people are willing to do it.

Over the past year, obedience has led our parish through many changes. The retreat I hoped to plan didn’t happen, mainly because I was asked to teach sixth grade catechesis, which has been time consuming, yet in fleeting moments, rewarding.

Sometimes it strikes me that I have the opportunity to pass on the faith to a new generation in our parish, and I pray not to screw it up. It may be decades before anyone can judge if God’s grace managed to flow through me in this capacity—and by that time, hopefully, my little part will be forgotten.

The woman I met with continues with her ministries as well. Our paths rarely cross.

The band now plays at the Methodist church down the street, and every now and then, our priest considers asking them to come back, though they would have to work with our new music minister, who plans liturgy for all the masses, so it’s unlikely they will consent.

In the meantime, we enjoy a new choir that has formed from the struggling remnants of past ensembles. They were off to a rough start as commitments were slow to come in, and they yielded to the professional ministrations of our new director. As of Holy Week, they were twelve strong, young and old, powerful, and mostly in tune.