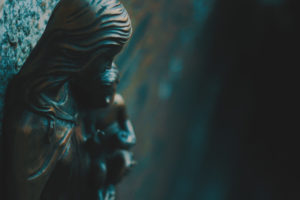 My daughter Anna Maria was born on Orthodox Easter Sunday—Pascha—in 2009. That year, the date fell on April 19. While her brother had blasted his way into the world at the very bottom of the night, in a delivery that was swift and surreal and unmedicated, my daughter arrived in the late afternoon as the sunlight was just beginning to dim. I latched her to my breast and asked my husband to run and get me a hamburger, fries, and a gin and tonic, as well as a big cup of coffee.

I was forty years old. Among the number of reasons we named our daughter Anna Maria was the teaching of holy tradition that the Virgin Mary’s mother was named Anna, and that she and her husband Joachim had long prayed for the little daughter who had been born to her when she was of an advanced age for the era.

Unlike Mary’s miraculous conception of Jesus, though, the conception of Mary herself is a celebration of marital sexuality: the Orthodox icon of Joachim and Anna depicts the aged couple embracing in front of nothing less than a bed draped with fabric colored red—the color of heaven, of course, and an aggressive comeback to those theologies that would denigrate the body in favor of the spirit.

There are a number of narratives about the little Mary from the extra biblical Protoevangelion of James that describe her early life with her parents, that are celebrated vigorously in Eastern Orthodox tradition. But it’s a Roman Catholic image that most gives me pause—a plaster statue for sale at the Opus Dei bookstore in downtown Washington, D.C., that depicts young Mary praying with her head on the lap of her mother, who is seated, monumental like a seventy-year-old Mother Superior, and quite clearly old.

I’m not that old, I think every time I look at it, though of course I am. But the uncomfortable pang of resistance I feel inside me has also to do with the fact that I, too, had a mother who was old.

My mother was forty-three when I was born; my closest sibling—her youngest of five—was already twelve. My father was fift-two, which may not be uncommon in the second marriages of Hollywood producers, but which was downright odd in a Southern Protestant context where folks married young and got their childbearing over with in short order.

My mother’s pregnancy, then, was an embarrassing reminder to her teenaged children that their parents—like Joachim and Anna, I always think—actually had sex, and continued to do so in an era before we were all constantly assaulted with Premarin ads (with their vases of wilted flowers) and Levitra commercials that point to some sort of biomechanical obligation to keep the hydraulics working.

In fact, the scandal of my mother’s pregnancy was such that when she presented herself in a visit to the OB/GYN, it was suggested that perhaps she did not really have to go through this pregnancy, that she could “get rid of it.” (And this, in Mississippi of all places, just barely past the Civil Rights movement, and five years before Roe v. Wade—a far cry from some Upper East Side clinic that might be depicted in a period women’s novel.)

My mother decided, of course, not to get rid of it. Instead, she had me, though the litany of Mad Men-era style abuses continued: the doctor who assented to her request for a Caesarian “to make sure everything is okay for this baby” is the same doctor who performed a tubal ligation after the delivery, without her permission. “You’ve had enough children,” he reportedly said to her.

She always laughed at this, a little, with a shake of the head. Yes, she supposed she did. And she was breezy, as well, and nonspecific, about the severe postpartum depression that sent her back to the hospital for a week a month after I was born: “I was worn out and needed a good rest.”

When I went through my own postpartum desert in a stretch from late 2009 into 2010—I didn’t even think of it as postpartum depression until probably a year later, but instead as just a crisis of faith—all I wanted was to go somewhere and have that kind of rest too, impossible with a job and an older child and a husband who worked at night. So instead, I kept on trudging.

I want to believe that the fact that I have done so, kept on moving forward, has protected me from the Wolf of Souls that ultimately sucked my mother down for all time into a world where she could not see beyond the mist of her own suffering. I realize that there are many who would argue that the downward spiral into which she fell was something that might have been ameliorated by the very act of “getting rid of it”—that’s the argument, isn’t it, about babies and lost money and lost jobs and lost futures?

And yet, all the suffering notwithstanding, how grateful I am that she condescended to dream me into being. She looked upon me with amazement, as startled as Anna must have looked upon her reflected flesh in Mary, and her pride in me was something she averred that she never, ever regretted.

But the Shadow of Death was cast over us from the start: I still had a babe in arms when I buried my mother, held her papery, veined hands and prayed the Our Father over her one last time.

I was sick with a mighty fever two weeks ago, and all of a sudden at my bedside was my daughter, reaching her hand out to comfort me, the blood of generations, all the way from its source, coursing through our veins.

This post originally appeared at Good Letters on April 20, 2015.