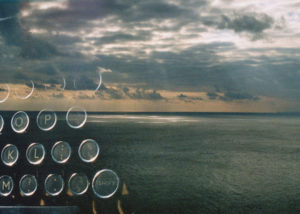 When the email came in from my editor, I wasn’t sure how to answer.

What do you want to do next?

After years—a decade, really—of what felt like pushing a boulder up a mountain, sitting down every night to write no matter if my family was watching a movie or there was ice cream being scooped into bowls or board games being set up, it was finally paying off.

An editor from a major publishing house was asking what I wanted to write. And unless I’d totally misread the subtext of the message (What do you want to do next? could also have been read as, So, where are you going when you’re done here?) it also meant she wanted to publish more books with me.

And if I were to go a level deeper, beyond contracts and advance payments, beyond seeing my book on shelves and having even the slightest status in an industry I’ve loved for most of my life, there was something I’d wanted even more—somebody invested in what I was doing.

This was the dream.

But instead of immediately firing an email back, I sat there staring at the message in my inbox, unable to shake the bone-level weariness that controlled every part of my body. Ever since I’d turned in my last novel, I couldn’t comprehend the idea of turning my computer on again (I hadn’t written in months), let alone finding my way through another novel-length project. Another 80,000 words of pain and suffering.

Now, there’s a blurb for my work.

If I’m honest, it wasn’t a lack of ideas. I have plenty of ideas, plenty of books that I hope to write. But after finishing my latest—a death penalty novel for young adults titled We’ll Fly Away—I realized was fighting something bigger than writer’s block, bigger than the exhaustion that zapped every day.

I wasn’t sure I had anything left to say.

I’d already signed up for the Festival of Faith and Writing when I got this email, so a few weeks later, as I boarded the plane to Grand Rapids, I was intent on figuring things out during the hour-long flight across Lake Michigan.

In the history of my life as a writer, this has never worked. So when the wheels touched down and I hadn’t solved any of my publishing, or existential problems, I found my way to Calvin College, to the registration desk, completely hopeless.

As soon as I walked into the room, I saw my friend Sara, who immediately gave me a hug and introduced me to her husband, who happened to be having a conversation with another friend, Chris, who I introduced to Paul, a coworker’s husband and a fine writer in his own instance, and then I got a text from Aaron, from Matt, and in those first few moments of the festival—slowly, slowly–my body began to relax and my mind stopped howling.

For most of my life, I’ve searched for a community. Blame middle school or the fact that we moved around a lot as a kid, but I’ve always felt out of place. Always secondary. I never had the lifelong friends that movies promised, the sort who would walk the railroad tracks with you, who would take a punch for you, who know what you need, even when you can’t say the words.

The books I write reflect this. They shine light on a part of me that I don’t let many others see, the part that needs help and still gets wounded and sometimes goes overboard because, double exclamation, we should be friends.

There’s something absurd and potentially arrogant about wanting to write, about thinking you have something to say. And I think that’s why I enjoy other writers. Why I’ve found my place among them. It’s a community of women and men who are willing to show you some shit. The kind of shit that requires bravery and honesty and, when they’re really good, teaches you something about the mystery.

And just as importantly, it’s a group who knows what it’s like when the words aren’t coming or when you’re so behind on a deadline, you can’t return phone calls or texts. A group who drink beer with you. Who laugh uncontrollably at stories you should know, but somehow don’t. It’s a collection of equally afflicted misfits who know exactly how it feels when an email that could not possibly be seen as anything but good news, sends you into a catastrophic tailspin.

Thank God for that.

So instead, I’ll take this tiny spark of a reminder and cultivate it. I’ll tend the flame until the day comes when I’m surprised to see that it’s gotten a little bigger, a little hotter, a little brighter. When I can look back to this weekend among friends and say, “Of course. And thank you.”