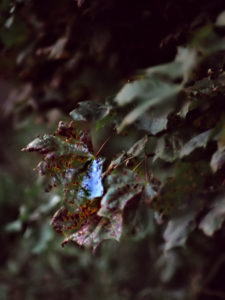 The last thing the world needs is another post about “living in the moment,” but I just spent a month failing at haiku and can’t help but speak about what I have seen and heard.

I’ve been engaging with form this year, so far writing a whole slew of sestinas, villanelles, and most recently, haiku—by far the hardest. In fact, haiku doesn’t even seem like poetry to me and barely seems like writing. It’s a spiritual practice, a mindset. And frankly, I spent most of the month putting it off because “regular” writing is so much easier.

It’s true that sestinas and villanelles are challenging. They’re complex, downright fussy forms. But I dove into them knowing that with so many words and poetic devices at my disposal, I could somehow make them work, even learn about myself in the process. And that is pretty much what happened.

But haiku requires presence. Full engagement with moments. And I don’t always like to take the time to do that.

The Haiku Society of America defines haiku as “…a short poem that uses imagistic language to convey the essence of an experience of nature or the season intuitively linked to the human condition.” Notice that this official definition does not mention the 5-7-5 syllable pattern. While many English haiku writers still employ 5-7-5, it’s not a requirement; Japanese “syllables,” which are more like sounds, are not the same as those in English. This difference means that 5-7-5 often translates into wordy, “busy” haiku that stray too far from the essence of a moment.

on a withered branch
a crow is perched–
autumn twilight

And a few stunning English ones, generously provided by my friend Joshua Gage:

Superbowl
the last wing
in the basket

Shrove Tuesday
the last pancake
on the griddle

melting snow
I remember
that I am dust

Short and sweet, of course, so when I had a month of haiku-writing ahead of me, I felt pretty calm at first. I’ll write when I take a walk, I thought. I’ll write when I go to Grand Rapids (shout out to the Festival of Faith and Writing!). I’ll write when I do my spring cleaning. This is something I can do! But every time I thought about writing haiku, I found reason to distract myself with music, talking, or writing–Facebook messages, to-do lists, articles–any expressive activity I could enter and exit seamlessly with some semblance of control.

The aforementioned Josh Gage took interest in my interest, though, and sent me postcards of haiku he wrote in February, National Haiku Writing Month (NaHaiWriMo). He also sent me two books, Haiku: A Poet’s Guide, by Lee Gurga, and The Haiku Handbook, by William Higginson. I dove into these books but froze up the moment I thought about writing. Josh told me I was thinking too hard.

I’ve always considered myself more a feeler than a thinker (I’m close to 100% F on the Myers-Briggs). But my tendency to think rather than be was highlighted during my own haiku month, when the notion of opening myself up to so many crystallized moments (boy, am I starting to hate that word) set me on edge.

But, eventually, because I knew I had this post coming up, I had to write something. So during one the coldest, snowiest Midwestern springs on record, I sought out imagistic moments that conveyed the human condition wherever I could. I approached those times of seeking with much more trepidation than I did sestinas or even my airplane villanelles, wherein I challenged myself to complete cogent drafts during short flights. Three short lines composed of juxtaposed images proved to ask more attention than I was willing—or wanting, that is—to give. In the end, my will won, and I wrote about ten haiku.

Before my haiku month started, I had anticipated writing maybe, oh, a hundred. We’re talking just three lines a pop. But I stalled out. Maybe I was, indeed, overthinking. Or maybe I was busier than usual. Or maybe I just need more practice.

But these four don’t necessarily make me want to burn my poetry degrees. In fact, I think they’re pretty okay:

foreclosure–
robin perched
in the rafters

sleet in the skylight–
I wonder when
he will arrive

I know that what I need the most practice with is noticing. Being. Presence. All that “living in the moment” stuff I warned you about. And although I wish I had come up with more haiku before writing this post, I have to address the fact that these haiku didn’t exist one month ago. These moments hadn’t been given their literary due. And now they have.

Josh isn’t letting me off the hook just yet. He has assigned me the month of May as my own NaHiWriMo, and he expects thirty-one postcards. I’ve already bought the stamps.