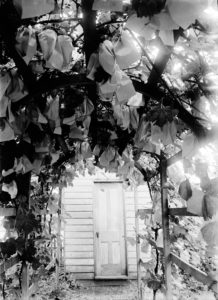 It has been years since I read the Narnia books, but the phrase I remember from them is “Aslan is not a tame lion.” Aslan, the books’ figure of Christ, can be tender and merciful; but the children learn that he can be wildly powerful as well. I recalled this while reading Richard Chess’s poem “are you my god.” The poem’s opening twelve lines evoke tame, “orderly” Seders, shouting that they “wont do!” No, your Seder must be wild with a cosmic violence—which the rest of the poem images in marvelously tempestuous detail. And why must the Seder be wild? Because, as the poem’s epigraph states, each participant at the Seder must relive the terrifying night of the first Passover, when God freed the Israelites from Egypt. I would extend this to  all our religious rituals, no matter what our particular religion. It’s too easy to tame them, to just go through the motions, rather than heeding what Annie Dillard once wrote of church-going: “Does anyone have the foggiest idea what sort of power we so blithely invoke? Or, as I suspect, does no one believe a word of it? The churches are children playing on the floor with their chemistry sets, mixing up a batch of TNT to kill a Sunday morning. It is madness to wear ladies’ straw hats and velvet hats to church; we should all be wearing crash helmets.” Or, as Richard Chess puts it in this poem: “Your Seder must light / the fuse that will ignite / the bomb that will free / the suburban / house of its roof, blasting it / open to stars and moon…”

“are you my god,” by Richard Chess

in every generation, each person must regard himself or herself as if he or she were the one liberated, on the very night of Passover, from Egypt

adapted from the Passover Haggadah

This won’t do, the Seder
your grandmother cooked
and indexed on
cards to leap down
the generations;
this won’t
do, the Seder sanctioned
by the rabbi, four
cups and mortar-board bread.
No! Your religious
uncle’s orderly
Seder won’t do!
Your Seder must light
the fuse that will ignite
the bomb that will free
the suburban
house of its roof, blasting it
open to stars and moon,
sending you like a letter
of a holy alphabet blown
apart into the night
to roam with dogs, to drink
the soiled birdbath water
in some mayor’s yard, to
scream like a burning
refugee, and knock
on door and door and door
asking is this
my home and
will you let me
eat and are you
my god, my god