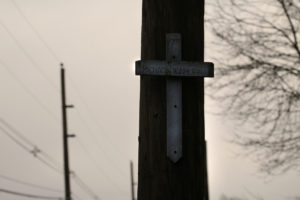 I haven’t any major gripes with the Roman Catholic Church. On the whole, I feel gratitude. The church took me in when I needed some in-taking.

Living in Detroit, however, I have found myself worshipping at Saint Anthony over on the East Side. The Mass at Saint Anthony is presided over by Bishop Karl Rodig, who was ordained a Roman Catholic priest in Salzburg in 1986. But things got different from there on out.

Rodig had issues with the church’s stance on matters of inclusion…. I don’t want to speak for him, but to my understanding, Rodig became, in essence, an episcopi vagantes, a wandering bishop. He founded what he calls the Ecumenical Catholic Church and purchased the beautiful and surprisingly intact Cathedral Abbey of Saint Anthony from the archdiocese in 2010. The archdiocese was not amused.

Bishop Karl conducts a liturgically solid, post-Vatican II Mass. But not an officially sanctioned one.

Instead of pursuing questions of orthodoxy and institutional legitimacy, I’d like instead to report on what it’s like to attend the church.

In January of this year, just before Mass, a local man rode his bicycle through the side door of the church. He rode right up to me. “Give me a blessing, Father, I’ve got shit to do,” he stated, more than asked. (I should mention that the man called me Father because I joined Bishop Karl’s New Order of Saint Francis and dress accordingly, brown habit and the rest).

The man looked at me without seeming to register what I’d said. He removed his baseball cap and bowed his head. I had no idea what to do. Then I put my hands on his head and said, “God, please bless this man in whatever shit he has to do today and keep him safe and remind him not to ride his bicycle inside the church.” The man nodded with satisfaction and rode away.

When Mass started a few minutes later there were about seventeen people inside the church, which can easily hold five or six hundred more. We sang the Kyrie eleison as loudly as possible in attempts to drown out the clanging of the old radiators, which attempt, in vain, to keep the temperature above freezing during the winter months.

We then moved into the Gloria, which one parishioner likes to sing with his arms stretched up and out as widely as possible. He is a large man who cannot sing. I believe that he has some form of autism, though I’m not sure precisely what his condition is. He sings in a shrieking squeal that very much catches the attention of newcomers to Saint Anthony.

A bit later another parishioner stumbled in through the front doors. He was so high that he could barely get down the aisle. He waved wildly to all of us up at the altar. I waved back as he collapsed into one of the pews in order to get some much needed rest.

A few minutes later, a man I’ll call Barry came in through one of the side doors. He shambled up to the choir rail and collapsed onto his knees. Then he started crying, wailing really. It was clear that he’d had a liquid breakfast, perhaps several. Barry’s been trying to get sober for some time. So far, it isn’t working. Sister Carolyn finally went down to him, took him by the arm and led him to the back of church where she gave him a cup of coffee and a donut. He stopped wailing and began to nibble.

Then Father Emmanuel gave a sermon. It was hard to understand Father Emmanuel because he is Sri Lankan and has a strong accent, and also because our sound system isn’t very good. Probably only his son and wife understood him properly. His son is our altar boy. His wife sits in the pews.

Not long after the sermon came The Great Hugging, otherwise known as the Rite of Peace. This takes a long time at Saint Anthony. The clergy come down and everyone co-mingles. There is a general greeting and exchanging of the sign of peace. Parishioners are touched, hugged.

Some of our parishioners don’t get touched often by other human beings. This is because they are dirty and sometimes they have not showered for days, weeks, months. Some do not smell very good. Some live in houses that have no electricity or water. And it is these human beings who we make an extra effort to touch. Touch them yourself and you will know why. I have seen people healed by this touching. Not all at once, mind you, not a miracle like you’d see on TV. But a miracle is no less miraculous for coming gradually.

The Mass ends not with the closing hymn, but with our own version of the agape meal, provided by the good souls around Detroit who bring donated food. The meal is usually of a high quality. And we eat at tables together. Not social time. Not chit chat for the sake of chit chat. An agape meal, in which bread is broken and the hungry eat—those who are hungry in the stomach and those who are hungry in the soul. These are fed. I am fed there every week. Fed.