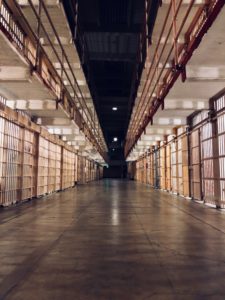 Monks in the Orthodox tradition have long believed that God’s love is unchanging, constant, like the light of the sun. We do not need to appease a deity’s anger or perform well to turn the light of God’s affection and gaze upon us. It’s just there, divine mercy blazing away, pouring down all the time.

The problem, these elders say is that our minds—our nouses, or the window to our hearts—have been darkened, like crusty basement windows.

We can be trapped in this basement, and when the illumination starts to seep through, the pure character of God shines through a soiled pane, a clouded filter of our psyches, wounds, fears.

“All the shit that’s been put on us?” a new member in our jail group asked as part of our discussion, “Our dad beatin’ the shit outta us? The cops, the judges, and all the grimy things we done to others, to our women, to ourselves? Kinda like that?”

I thought it was a good summary of how many Christians’ images of God, especially in the West, are still shaped and darkened by guilt and experiences with authority.

I told the guys in red scrubs more of what the monks think about this darkened minds business: although we can do nothing to earn God’s love or turn his ever-shining light upon us, what we can do is get to work removing the internal rubble.

That’s what they call askesis, ascetic practices. Or praxis. Ceaseless prayer, all-night vigils, renunciation of possessions, silence, confession, service to others—all the hardcore religious stuff for which monks are best known. It’s not penance, self-punishment, as I used to assume. It’s a way of scrubbing at those windows to our hearts.

“You’re talking bout gettin’ some Windex on that, then!”

I suggested we experiment with this askesis. Not just talk about it. I asked if any of the guys had ever tried fasting. There was silence. They looked around at each other. One guy from a churchy childhood said he thinks he did that once. Others laughed about how little—and disgusting—the food portions are in jail.

I told them I had no great personal story about fasting, though I’d messed around with it all my Christian life. But, I said, my friend in a distant prison, in solitary confinement, had written telling me how he’d decided to fast.

He’d read in a book I’d mailed him, Mountain of Silence, full of interviews with a holy elder in a monastery in Cyprus, about how the monks are constantly fasting. So he tried it. He wrote how he’d been going three days straight, and after the initial hunger and irritation, he felt more “energized, awake, clean.” He saw more things in scripture and could write longer letters without distraction.

So, I told the guys, I’d be willing to try it for one straight week if they did, too. “All week,” I said, “let’s pass on breakfast and lunch, eat only dinner, use the time and growling stomachs as internal alarms to pray a little more. And see what happens.”

That week, on a Tuesday, I met up with an Orthodox poet for lunch at his house on the Puget Sound. He has spent a lot of time as a pilgrim on Mount Athos, a misty island in Greece swarming with monks in crumbling old hives humming with prayer. He laughed and told me the inmates and I were doing it all wrong.

“So stop it,” he smiled, swilled a little single malt, and passed me the salami. “It’s just Wednesdays and Fridays. Not all week. And even then, you still eat. Just lay off the meat, brother. Even overdoing asceticism can be its own indulgence.”

But the next night I visited one of the men in our jail group in a small holding cell with a bare table. He had tattoos all over his scalp and neck, a young Mexican gang member. “So I been doing that fasting you told us about, right?” he began. “And I had nightmares every night for the first few days.”

They were like videotapes, “of all the shit I did those years in prison—you know?” The visitation cell might have been tapped, so he tilted his head and I knew he was referring to the many unspeakable and violent acts he’d felt obligated to perform in order to survive in various prisons. Things he’d told me about on long car rides to probation appointments before he’d gotten arrested this time.

“I’m telling you: three straight nights, when I started fasting, I had nightmares of all that. Like I was seeing it all from the upper corner of my cell, looking down. Like a security camera, you know? Shit I forgot all about; it all came up at night. I’d wake up in sweats, my heart pounding. But I’d feel ok in the morning. And now—I don’t know—I feel hella good. I pray more during the day and I got the homies on the tier joining me with a little psalm at nights.”

How is it that going without food opens up deep chambers in the mind, heart, spirit? I’ve read some of the new science about how interconnected the stomach is with the brain, the “gut mind.” Maybe monks with their fasting have always known that the stomach is a tangible backdoor to the mind and heart, one we can clear and open. With askesis, spiritual Windex.

The homie started getting visions after the nightmares: how he wanted to use his tattoo design skills to work on art with local kids, and get them gardening. “I wanna get out soon now,” he wrote me, “and not waste my life in prison. You know I got so much I can do out there, I just wish I would have done it before.”

I told him at our next visit how several months with a good therapist might barely get that kind of darkness from his nightmares to surface in a healing way. And to then discover his own gifts in a new light! And it came about for free, in a county jail cell, when one prisoner in America’s sprawling prison system voluntarily took on an ascetic practice. Like fasting.

“I know,” he shrugged, never having met a therapist. “Crazy, huh?”

This post originally appeared at Good Letters on January 12, 2015.