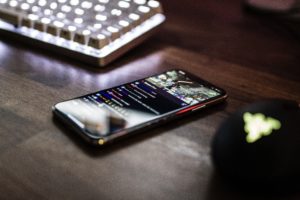 How You Know It’s Time for a New Phone

There was a moment when it became easier to walk downstairs and talk to my wife face-to-face than to wait for my phone to load messages. It was time for new phones.

Soon we were at the T-Mobile store looking at a display of tiny machines with flashy screens and signs with large numbers posted next to them. Each had a different message, somehow.

I’m the newest.
I’m the most popular.
I’m the cheapest alternative to those other guys.
I’m for the people who can’t afford a good phone.

I’ve never been the guy who had the newest things, and in most cases I’ve made my peace with that. I learned to weigh the benefits of status against the costs of bottoming out the bank account. I learned how to shop discount and thrift stores and get older products for less.

I tell myself I don’t want to be the kind of person for whom “money is no object.” I want to be thoughtful and avoid the surcharges for feeding one’s vanity.

I had a friend who only half-joked when she said that if she were ever stranded on a desert island she’d want her gym membership and her cell phone. I know what she means. Some things feel like a part of you, even if you know, when challenged, that they are not.

When I was staring at that wall of phones, though, the stakes felt more complex. Those phones sparkled with glamour but also with something more sinister…

I Am Not Your Broom

They Might Be Giants has a children’s song that goes:

It’s a silly song about an anthropomorphic, manufactured, physical object, but is it so silly?

One could argue (just watch me!) that it betrays a deep anxiety about our increasingly anthropomorphic, manufactured, digital objects.

Not the familiar anxiety that our robots will eventually rise up to conquer us (a lá The Matrix, Battlestar Galactica, I, Robot, Terminator, and on and on) but the more banal and—to my mind—eerier concern that our robot friends will come to the same conclusion we expect our flesh-sack friends will come to: that we’re not worth the bother, that they can do without us.

I get inordinately irritated when I stand before an automatic door and it fails to open for me, or when a hands-free faucet won’t cleanse my hands of germs and automatic soap. It’s existential. I’m here! I’m present! I exist! You can’t ignore ME!

What Your Phone Says About You

The disturbing message of that wall of phones was, We don’t need you. We’ll be cool without you.

My world depends on communication, and I don’t just mean posting stupid stuff on social media. I mean the way I earn a living is to meet, engage with, and negotiate deals with my clients through digital tech. I actually have legit uses for some of this fancy stuff.

A sociologist coined the term “conspicuous consumption” in 1899. It’s since been applied broadly from Hollywood reality TV to Renaissance art criticism. In a society where class doesn’t depend on birth and land, the classes strive with one another to possess the trappings of wealth and prestige. Think iPhones, eco-tourism, and S’well bottles.

The rub? “Signaling” has real-life consequences. It’s another way not being “in the world” can cost you.

What would my new phone say about me? How much did I care? How invested should I get in this thing that returns a gaze similar to my cat’s—an “I could take or leave you” gaze?

When I made my choice for an older, “reasonably” priced phone, my buyer’s remorse immediately kicked in. You spent how much? You might as well have spent the extra for the newer one. There will be a catch; there’s always a catch.

If I read the identity thing backwards, it could mean that I don’t think I’m worth a newer, nicer phone. That’s a consumerist logic if I ever heard it. But maybe I’m just pathologically primed to expect my devices to tire of me.

Alternative Facts About the Self

The desire to be known, to be in relationship, is God-given. It’s right there in the Genesis story.

I can think of few things that would be more devastating to us, as a species, than for our machines to shrug their shoulders at us, yet surely the Almighty knows this experience better than anyone.

If I were writing my own Paradise Lost, it would read as parody. I’d have a band of angels saying, “We’re too obsessed with our humans! Sure, they have their uses, but at the end of the day they’re just things.”

Another group of angels counters, “No, these things are wonderful! We should embrace them!”

Imagine the Father saying, “It was an expensive phone, but I was, like, ‘I deserve this.’” Imagine the Son pleading with the Father, “Yeah, but even Satan has a nicer version than me!”

The ironies might be a little complex for our visual age, though. The central irony, of course, being that God, the Creator, doesn’t need us to confirm his identity. Of course, neither do we need our phones to confirm our own identities.

But unlike God, we do need something—or, better, someone—to reflect us back to ourselves. Someone to confer significance upon us. That’s where consumerism gets legitimately disturbing. It knows what some Christians have forgotten.

I’ve had my new “old” phone a couple weeks, now, and it’s so much better than the old old one I can’t waste time caring that it’s already almost two versions behind.

The self has always been a negotiation. I hold up the selfie cam, put a beer to my lips, and snap. The world hardly knows the difference.