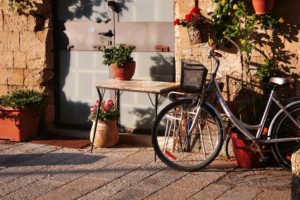 If I could have only one poet, I’d choose Yehuda Amichai.

He’s the poet of the city where I came to life in my twenties:

Jerusalem is a port city on the shore of eternity….

Jerusalem is the Venice of God.

Jerusalem stone is the only stone that can
feel pain. It has a network of nerves.

The air over Jerusalem is saturated with prayers and dreams
like the air over industrial cities.”

He’s the poet of the book that tells, so I don’t have to, the story of my life:

The Bible and you, the Bible and you.
As the Torah scroll is read aloud each year
from “In the beginning” to “This is the blessing”
and back to the start, so we two roll together
and every year our love gets a new reading.
Torah, Torah, rah rah rah!

He’s the poet of the God I can’t get away from, the God I can get close to only when God is called by new names:

I am a man…
[with] a precisely monitored memory system
of the late twentieth century,
but with an old body from ancient days
and a God more obsolete even than my body.

He’s the poet of the people (I am my people’s; my people are mine) of the long exile and the (still) short time back home:

People caught in a homeland-trap:
to speak now in this weary language,
a language that was torn from its sleep in the Bible: dazzled,
it wobbles from mouth to mouth. In a language that once described
miracles and God, to say car, bomb, God.

He’s the poet of my love of women:

I comforted you with apples, as it says
in the Song of Songs,
I lined your bed with them,
so we could roll smoothly on red apple-bearings.

I covered your skin with a pink chiffon,
transparent as baby lizards—the ones with
black diamond eyes on summer nights.

You helped me to live for a couple of months
without needing religion
or a point of view.

He’s the poet of my fatherhood:

I remember my father waking me for early prayers.
He would do it gently stroking my forehead, not
by tearing away the blanket.

He’s the poet of my wars, the wars in which I did not serve, the wars that have kept the gate to my country, one of my countries, open:

Mr. Beringer, whose son
fell at the Canal that strangers dug
so ships could cross the desert
crosses my path at Jaffa Gate.

He has grown very thin, has lost
the weight of his son.
That’s why he floats so lightly in the alleys
and gets caught in my heart like little twigs
that drift away.

He’s the poet of my yearning for pity, mercy, compassion:

God has pity on kindergarten children.
He has less pity on school children.
And on grownups he has no pity at all,
he leaves them alone,
and sometimes they must crawl on all fours
in the burning sand
to reach the first-aid station
covered with blood.

But perhaps he will watch over true lovers
and have mercy on them and shelter them
like a tree over the old man
sleeping on a public bench.

Perhaps we too will give them
the last rare coins of compassion
that Mother handed down to us,
so that their happiness will protect us
now and in other days.

He’s the poet of my longing for redemption:

I used to think it could be solved this way:
like people gathering in the station at midnight
for the last bus that will not come,
at first just a few, then more and more.
That was a chance to be close to one another,
to change everything, together
to start a new world.

My kids—all adults—have asked me why my wife and I are we going there now, how can we: Gaza, West Bank—Palestine? It’s not safety that concerns them. It’s complicity. We want justice, too. Two states. Of course, not even that will be a solution. It will be, as Amichai writes in “Wildpeace,” “A peace / without the big noise of beating swords into plowshares.” It won’t even be peace. Not, alas, for many generations. Just separation.

If I could have only one country, would I choose Israel? The United States? I can’t choose only one. My story, the wholeness of my story, holds both. And Alexandria and Baghdad, Córdoba, New York, Würzburg, and Rome—wherever Jews have fled, dwelled, and fled again in search of a home, any home, home. I am bound to place, to many places. I need a body that can hold them all.

If I could have only one poet, I would choose Amichai. His work holds it all: my places, my displacements, my prayers that I believe, and my prayers that I no longer believe, my holidays, my ordinary days, my history, my present, my loves, my pleasures, my sadnesses, my imagination, my heart.

That’s why I’m going to Israel. To see again, even if mostly through the windows of a tour bus, the land where my poet lived most of his days; to walk, even if it’s just for a block, down a Jerusalem sidewalk where my poet walked, carrying groceries, noticing a note left on the gate of a house, lusting after a beautiful woman, eyeing a typical tourist like me, whose blood has never spilled onto the land that he imagines—with the help of a story that tells him it is so—is his home.