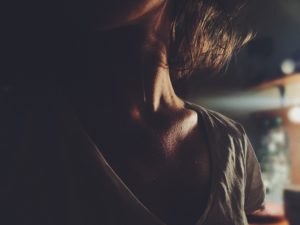 I feel bad about my neck. Those are not my words; they’re the title of writer/comic Nora Ephron’s final book about the indignities of aging. And I did a double take when I looked the publication date up: I Feel Bad About My Neck is already ten years old.

Such is the passage of time.

But the truth is, ten years after the publication of the book, I now feel bad about my neck, too. On the gray June day I’m writing, I’m almost exactly four months away from my fiftieth birthday.

I’ve taken precautions against the advent of this landmark birthday sneaking up on me—it was years ago that I excised my birth year from my Facebook profile and taken the date of my high school and college graduations off my resume.

My husband and I are the somewhat older parents in our children’s cohorts (though not the oldest by a long shot in the Washington, D.C. region). We’ve both inspired awe at parties by the lists of concerts we’ve attended (The Smiths on The Queen is Dead tour, R.E.M. at the Hammersmith Odeon, Bryan Adams at the Southern Star Amphitheater at AstroWorld)—as well as carefully learning not to freak people out with our memories of the Watergate hearings and paying for Italian hotels in Lire.

Why doesn’t our generation look as old as our parents did at our age? Several friends of mine and I have discussed this phenomenon. Hair dye has certainly helped. And having youngish children in my forties has certainly kept me busy and engaged.

For me, too, having five siblings, in ages ranging from twelve to twenty years older than I am, has perhaps helped to artificially seal the consciousness of aging, because no matter what, I will always be “the baby.”

Which I guess is another way of saying that yes, aging has sneaked up on me after all. And for that situation the hair dye is having only limited utility. (My mother was completely gray at thirty-one, but she already had five children.)

And so like many women “at midlife” before me, I have started to become obsessed with little things like, yes, my neck: I pull at the skin and study it from various cell phone camera angles while I wait in line at the DMV. (See, there, I confessed it.) I started running about a year and a half ago after a lifetime of no formal exercise, and I have come to depend on being able to work out—for mental health if for nothing else.)

But: I’m too poor and too faux-humble to engage in any cosmetic surgery procedures. I’ve never been thin, either, so at least I have that going for me, and do not mark my physical decline from any svelte past. I was never a size two.

I’m happier and more content than I have ever been. Nonetheless, the Eternal Footman still holds my cloak and snickers.

Ephron again: “Anything you think is wrong with your body at the age of thirty-five you will be nostalgic for at the age of forty-five.”

To say nothing of forty-nine.

It’s hard enough to adjust to the tangible evidence of physical decay in a culture that wants to turn physical self-maintenance into a punitive practice far more stringent than what the most rigorous monastics engage in. (Have you ever looked at what Kim Kardashian has to do every day? It’s involuntary servitude.)

We all talk convincingly about how it’s what inside that counts, but then we privately believe, and act, otherwise. (Cell phone cameras!)

The other day, though, I had the honor of attending the Bar Mitzvah of the son of a high school friend, at a Reconstructionist synagogue in Potomac, Maryland. It had the pale wood and glass window walls of an early 1990s construction—with some studied Zen touches—and I was pleased that I was old enough to remember when that particular style was new.

As is the case in my own church, the congregants were of all ages. Another good high school friend was present with her thirteen-year-old twins in tow, who ignored us, as my friend and I sat cross-legged on the concrete outside the social hall afterwards, eating our red lentils and injera. She told me that she’d just attended a conference on Jewish theologies of death and dying, and we explored the links and discontinuities in our traditions.

Most of all, though, I remember my friend, the Bar Mitzvah boy’s mother, standing on the bema giving her son a blessing. She was gorgeous and radiant in a gray and white dress as she spoke words that would guide her son in wisdom.

All of us high school friends were the age that we were, lives rich with experience, and we would not have had it otherwise. Not for all the un-grayed hair and the unlined faces in the world.