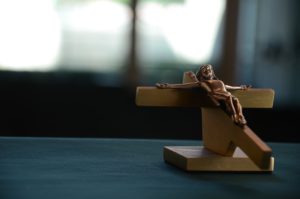 The jail staff asked if I would meet with some of the guys in the infirmary.

I sat down at the small, bare table in a cramped lawyer visitation cell, and three men in red scrubs squeezed by each other to take their seats with me. One of them was Hank, an old man with a scraggly white beard stained yellow around his mouth, gray and white hair hanging over his sagging face.

The long beard and long white hair reminded me of an abbot I know at a Russian Orthodox monastery I visit a few hours away, on a rainy, evergreen island, an abbot I am very fond of. But this man, Hank, stumbled into his seat at the table to my right. His pale and bare chest was exposed by the ratty red XXL V-neck he was issued. He swore at the guard over his shoulder as she slammed shut the heavy door to our cell.

“There’s another man locked up with us back there,” Hank said partway through introductions, looking me in the eye. “I will kill him before I leave this jail.”

This was not our normal prayer group startup banter. But Hank was serious. I could see the vulnerable pink tear ducts exposed around his eyes, the skin hanging translucent and loose around his face, making him a transparent man.

“I’ve already murdered one person, and I’m looking at twenty-five years now. So it won’t even matter!” He hit the tabletop with his fist, all gnarled knuckles and liver spots, and looked at his other infirmary mates, growling. “He mocks me, day and night!”

The other guys told him to cool it; we’re here for church.

Hank put his hands together in his lap and looked down, holding it together.

We read from the first page of our thick, recycled-paper Bibles: when God lovingly fashions human beings from the earth—in the image of God. Like a self-portrait.

We looked at each other around the table for a moment.

Before we could truly see each other, I suspected we might need an aid. I passed around a painted wooden icon I’d brought in with me. It was Christ the Prisoner, a skinny, shirtless brown man in a red robe, face downcast, iron bars behind him.

“What if you saw each person as the image of God,” I asked, “the artwork of God? No matter who they are, what they’ve done?” I watched the men pass the icon around and gaze into it. “How would that change things?”

Hank grabbed the wooden icon and his hand trembled as he stared. He set it down on the table. The rest of us sat watching him and waiting, sensing something about to erupt.

His huge hands came together, holding something we could not see. “He was…molded…and shaped”—Hank shaped his hands around something lovingly—“by God.”

Somehow we knew Hank was talking about the man he wanted to kill.

I was witnessing the big shake of remorse in a man, sudden and scary and up close, staring right at me. I could smell his aging breath.

This man locked away in the infirmary was having an immediate response to the imago dei, the image of God, and its implications for how we treat one another. It pained him. He gripped the table now.

I backed up, said I had another icon for us to look at.

It was small, round. I handed it to the younger guy next to me on the left, with long waxy pink scars down his wrists. I had placed into his hands my wife’s small makeup mirror, which I’d also brought along. “What would it change,” I asked, “to see God’s image in this frame?”

When he saw himself in the mirror, he looked away, handed it to the next guy. His jaw clenched.

For some of us, it is so hard to see any true goodness when confronted with our own face.

The next guy, a middle-aged African American man, took the small frame and gazed into it deeply, leaning forward. He hardly blinked. Then he shook his head. Was it sorrow for where he’s landed in life? Pity? Disbelief at the possibility of seeing God in that reflection?

Then it was Hank’s turn. He wiped his nose, his eyes, and accepted it, not knowing what icon he’d see in this small round frame. When he focused on the mirror, his face soured in grief. I watched the same face he was looking at: a broken and weary man, wounded and murderous, but with maybe the same eyes as the young man he’d lost somewhere along the way.

“When I go to prison,” he finally spoke, “they’re gonna kill me.”

Did he mean he’d die in prison custody? I had done the math: seventy-one now, with a twenty-five year sentence. I clarified: “You don’t mean assaulted, right?”

“Yes,” he nodded, still looking into the mirror, “assaulted.” He explained he’d spent much of his life in the Banditos biker gang. And they would punish him “for the kinda charges I got, how I strangled the woman I killed. And…”—he looked at me with panic, whispering now—“I don’t even remember doing it. I blacked out.”

He didn’t have to say the rest.

To be continued Monday, June 25.

This post originally appeared at Good Letters on March 25, 2015.