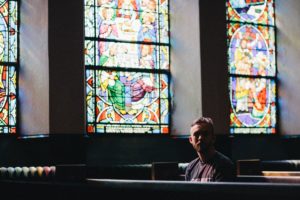 The first time my wife and I worshipped in an Episcopal church, we were members in The United Methodist Church, the denomination that baptized, confirmed, and eventually called me to ministry.

On any given Sunday across the globe, you can find a United Methodist congregation worshipping. And at least in the North American churches, there is a distinct and particular flavor of worship common among them. From Charles Wesley hymns to grape juice and Hawaiian bread as communion elements—it was familiar to us.

Though my wife was newer to the denomination, she pretty much had the Methodist worship routine down, too. So, when the Episcopal congregation stood up to sing the doxology, my wife and I were grateful for a familiar moment. We stood, sang loudly, proudly, all the way up to the final line when—unlike the Methodist congregations I’d been a part of—they did not sing the final Amen.

My wife, a trained soprano, let loose a wonderfully loud and perfectly in tune Ahhhhh-meennnn that echoed across the century-old sanctuary.

She was mortified. Naturally, I’ve taken great pleasure in this story for the last fifteen years.

After that, we didn’t visit the Episcopalians that often. True, it had more to do with my near-constant church employment in different denominations and not some deep-seated resentment toward the Anglicans. (But I do enjoy pretending that is the reason every now and again.)

And yet, I always had a secret fascination with how Episcopalians worshipped. Our pastors had stoles and some of them even wore clerical collars. But the Episcopalians? They knew how to do church.

It also didn’t hurt that the denomination was making progressive (prophetic?) stands for equality among LGBTQIA+ persons. Meanwhile, United Methodists have been locked in a battle for the soul of the denomination on the very same topic for decades. A fight that, hopefully, will see the Holy Spirit break into the hearts and minds of its members as they consider a way forward this coming February at a Special General Conference concerning human sexuality.

This fight was the reason I suspended my ordination, why I couldn’t in good faith move forward in a process that wouldn’t allow friends and colleagues to follow their own God-given calling to ministry.

But I stayed in the denomination, mostly because—as one pastor eloquently described it—it’s easier to piss when you’re standing inside rather than outside the tent. That glorious image aside, there were other reasons. Every time I looked to leave, my investigations into the more progressive mainline denominations often left me less than inspired. Whether it was the worship or denominational doctrine and polity, I always went back home to Methodism.

And then I took a job outside the church. In all honesty, it wasn’t exactly a pilgrimage away from ministry. I began working as a curriculum developer for a mainline publisher. Suddenly having Sundays free was liberating. Leaving my work at work, a revelation. No more lock-ins or ski trips or kids who thought it was funny to hide in the church even though their parents—who were giving me the side eye—and I were calling for them to come out, please.

I rode that wave for a solid three years before suddenly and without warning, I felt the itch.

I have a lot of experience with this sort of prodding. It first came into my life decades ago, a slow whisper telling me that—despite everything, despite who I thought I was and wasn’t—I was supposed to go into ministry. I ignored that voice for a long time. And I regret that.

So now I listen. Even when I don’t want to.

But honestly? I didn’t want to hear that nudge—if I could find the right place and the right situation—to go back into church work.

I didn’t go down easily.

I applied for a lot of jobs, even interviewed for a few. None of them felt right. And every time I’d leave a stuffy church library or neutral coffee shop location, I’d get in my car, take off my tie, and call my wife to tell her it wasn’t right. The more church jobs I saw, the more I tried to talk myself out of it.

God isn’t talking to you. Who are you? Besides, you already have two jobs…

But still I looked.

I will force myself not to quote the Bible, not to write about asking and seeking and finding. I won’t pretend that I had any sudden, divine revelation or that I was driving down the street and beams of light shot down from the heavens, landing on a church made of fieldstone. In fact, it happened the way most divine moments in my life have occurred—simply, almost boringly.

I saw the advertisement online. I had an interview. I was offered a job as the formation director at an Episcopal church.

Everybody was excited. Everybody agreed this was a perfect fit. And yet, the first thing that came to my mind after I had accepted the job was…I’m not Methodist anymore.

And I certainly can’t explain why that thought came to mind, or why it carried over until my first Episcopal worship service on the job where I found myself confused and unsettled and for the first time in years, really having to pay attention to every movement that happened in worship.

The pageantry and reverence of the service. Bowing as the cross is processed up the aisle. Holding the Gospels high in the air. Vergers in long, black robes. The sign of the cross. Drinking from a common cup. It grabbed me in a way that worship hasn’t in a long, long time.

Does this happen in other churches? Of course. And is there a United Methodist church out there that could make me feel this way again? Surely. But it’s been years since I’ve been awed by worship. Since I’ve felt that all-too-familiar pull to kneel and receive the Eucharist. Since I’ve been surprised by the beauty of a hymn. Since I’ve felt mystery.

And for that I am thankful. I am humbled. But that first Sunday, I looked at my wife when it came time to sing the doxology, both of us smiling as I pointed to the bulletin and whispered, “Do you remember?”

Bryan Bliss is the author of the novels Meet Me Here, No Parking at the End Times, and We'll Fly Away, all with HarperCollins. He holds graduate degrees from Seattle Pacific University and Vanderbilt Divinity School. He lives in Saint Paul, Minnesota, with his wife and kids.