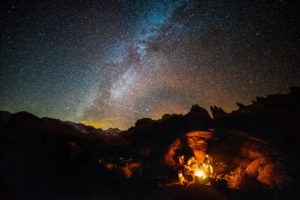 Fridays used to be pizza and a movie nights, growing up. My dad would bring home a ridiculously greasy pizza from a little place in the next town over called Pizza Stop.

It was on one of these nights, as I recall, that we watched DeMille’s Ten Commandments. As good churchgoing Christians, we knew the story, and we soaked in the spectacle and horrors of the plagues, the magic of the parting of the Red Sea, and, notably, Moses’s fearsome encounter with Yahweh on Mt. Sinai.

In that moment, God appears to Charleton Heston as an animated pillar of fire, and he literally writes each commandment on the stone mountainside with spiraling arms of fire.

As a child, I was prepared to believe every miracle story as it was written. I’d already seen people speak in tongues and heard prophecy in our church.

Some part of me had an idea that the whole Bible was written with those fiery arms, or perhaps in a less spectacular but still miraculous way. No one was really specific about what it meant for the Bible to be the “word of God” or “given to us by God.”

Through middle school and high school I slowly started appreciating that human beings literally wrote the words, but it wasn’t until a Bible course in college that it dawned on me that other humans had to put the Bible together.

It wasn’t unsettling so much as awe-inspiring, arresting: there was a moment in the history of the church when thoughtful, educated, but fallible human beings—my fellow Christians of old—debated and fought and ultimately collated what would become the most important anthology of all time.

Plenty of people have concluded on these grounds that Scripture cannot be truly “inspired” by God.

Plenty of people have ignored history and convinced themselves that the NIV is the Bible we were meant to have all along.

And plenty of people have determined, like me, that something in between must have happened, that God must have so ordered things and moved in the world as to lead his church to this historical moment with this imperfect, hand-me-down text.

In our age of “farewelling” people (thank you, social media, for another horrible neologism), I was curious to see how Rachel Held Evans handled biblical authority in her new book, Inspired.

If I’m being completely honest, I was hoping Evans would help reconcile me to some of the more difficult aspects of the text. Evans herself quotes author Addie Zierman’s advice on reading the Bible: that one should think of it “as a song that can be covered and remixed by a variety of artists. ‘Find your cover artists…. Find the voices that help you hear the same songs differently.’”

I guess I was hoping Evans could be one of my cover artists.

Of course, Evans’s take on the Bible is characteristically disarming in its confessional candor, its lucid intelligence, and its comfortable discomfort. It’s well-researched and clear and reads like a pleasant tour of botanic gardens.

Her stated aim is to “recapture some of that Bible magic” that she felt as a child, “but in a way that honors the text for what it is—ancient, complicated, debated, and untidy, both universally relevant and born from a specific context and culture.”

It’s a post-fundamentalist, even post-evangelical book, and that’s what’s going to get her into the usual trouble. I believe she only uses the terms inerrant and infallible once each, and then in scare quotes. She skirts those questions in favor of questions of significance because that’s where she feels the text has the most room to speak to her.

It’s also arguably a bit of a mess. It’s part memoir, part fiction, and part nonfiction guidebook. I often wondered just what she wanted to accomplish, whether she was trying to do too much.

But it’s also a fascinating, compelling read. I mean, it’s a book about reading the Bible that is hard to put down—no small accomplishment. You can argue her orthodoxy or her politics, but you can’t deny her courage and her candor. She tackles the problems of genocide and human sacrifice and miracles head on, admitting her own struggles, and somehow you end each chapter feeling like they aren’t such big problems after all.

I remember interviewing for a teaching job at a Christian college and being grilled on my theology of scripture. I wanted to be honest, but I also felt my honest opinion couldn’t be phrased in the evangelical language they wanted. The best I could come up with is that the Bible is a central “fact” of the faith; you can’t ignore it.

Evans, too, treats the Bible as a central fact of the faith, a text that any earnest Christian must wrestle with and demand a blessing from. And this is ultimately why the book works so well. She’s never prepared to just write off the parts she doesn’t like but searches for some way to square them with the loving Christ she finds in the gospels.

From a modern perspective, she can be accused of agnosticism, as if she points out the beauty of all the flowers in the garden but says, “We’re not sure where they all came from or if we got the names right, but we can appreciate their beauty, at least!”

Call it postmodernism, but it’s really more premodernism. The premoderns believed in truth but seemed much more comfortable with having three or four versions of the same true story.

Maybe my sense of the book’s unsettledness owes to Evans still working out the worldview shift from modern to premodern. More power to her; I’m working it out myself. But I’ll take a woman learning to play in the field of scripture over a pedant wielding it like a club anyday.