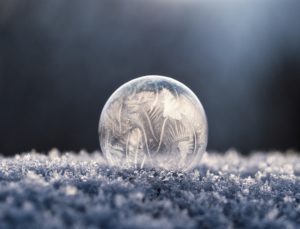 One of a writer’s greatest challenges is to create a short piece that is in no other way “small.”  In 14 brief lines, Hailey Leithauser has succeeded in writing a poem that is simultaneously compact and expansive.

Prefacing it with Robert Bly’s line, “Some small bone in your foot is longing for heaven,” Leithauser’s poem skillfully evokes the experience Bly describes. Of the 43 words in the poem, 10 of them can be used in English as noun or verb: twinge, stir, throb, tug, itch, twitch, hook, jerk, tease, brustle. Their double duty contributes both to the economy and energy of the poem. Like an apophatic theologian, claiming that some of these terms can only describe what the “longing for heaven” is “not,” the poem’s speaker invokes their action as well as their failed approximation to help the reader recognize it.

In its last five lines, the poem moves away from the escalating violence of the first eight noun/verbs to the gentle “tease” of “fine, stiff pinions”; the “small bone in your foot” becomes part of a bird’s wing and the wings of saints and angels. The earthbound human, curtained in flesh and bone, oriented heavenward, is ever poised to ascend in its longing.

“Some Small Bone,” by Hailey Leithauser

This twinge at first stir
too modest for throb,
more diffident
than tug,
not an itch,
not the most
incurious twitch
of a hook,
not a jerk,
but the tease
of brustle
of the fine, stiff pinions
of every curtained
saint and cherub.