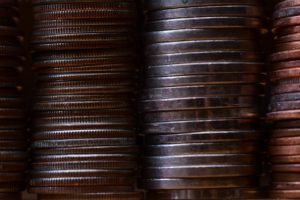 I’ve never really been into crosses.  Like fire hydrants or Starbucks, there are so many, I don’t even see them. Sermons or songs that ask me to meditate on the cross might as well ask me to meditate on the church snack table because that’s where my mind wanders as I wait for the cross, cross, cross (say the word enough, and it deflates to a hiss) to go back on its Precious Moments shelf.

When we traveled to southern Illinois with our three children over spring break, we discovered that just five minutes in a popup camper leads to violent fights over Pringles. And those bad boys can draw blood. So we hiked the kids to exhaustion, and when we didn’t know what else to do, threw them in the van and drove toward a 111-foot structure towering over the Shawnee National Forest: the Bald Knob Cross of Peace.

As a veteran road-tripper, I’ve visited a lot of kitschy sites, from the largest thermometer in Baker, California, to Cadillac Ranch, Amarillo. I’ve exited a barren stretch of highway to pose in front of the sign for Buford, Wyoming, Population 1. This cross, I was sure, would promise another quick photo op and nothing more.

We wound through the Ozarks toward the town of Alto Pass, the white cross looming larger with each curve. After pulling into the parking lot, we stepped out and shaded our eyes. As expected, it was a big-ass cross. And as expected, I felt nothing. It’s hard to picture a first-century rabbi nailed to a behemoth structure of insulated metal panels that can be seen for 7,500 square miles at night.

It takes twelve seconds to view a cross, so we wandered over to the visitor center with its expected T-shirts and mugs. Posters advertised the upcoming Easter service, Blessing of the Bikes, and sodas for sale in the fridge. A bandannaed, pitbullish mutt lolled on an old couch while a man resembling a biker himself whispered and pressed something into the palm of an elderly woman in a wheelchair. There were tears in her eyes.

“Welcome!” he called to us. “Have you found yourselves on the map?”

I was surprised to see that, according to maps tacked to the wall, people had visited from nearly every state and dozens of countries. My husband squeezed another pushpin into the plastic mass of color known as Illinois. I didn’t feel very special. I poured myself some coffee-related substance and sat down to watch an informational video.

Bald Knob Cross, I learned, began as a dream of interdenominational worship. Starting in the late 1930s, people gathered at the site for Easter. When the original board of directors—which included an African American and a woman, a big deal at the time—came up with the idea for a cross, a core group of people began raising funds, including Myrta Clutts, who sold her pigs. Ground was broken in 1959, the cross finally completed in 1963.  In 2012, after some rough years, it was reintroduced to the public as a fully restored structure.

Okay, I admitted to my husband. That’s a cool story. Not what I would do with my resources, but cool.

Before we could head out the door, the biker man motioned us to the counter.  He picked up several pennies with crosses punched out of them and a few of the punched-out crosses themselves.

“The One who sent Him,” he said gently, placing a penny in my palm.

“And the One who was sent,” he added, dropping a tiny cross.

He did the same for my husband. Then my kids appeared before him with open hands.

“The One who sent Him. And the One who was sent,” he said, trickling pennies. They held their coins to the light, squinting through the cross-shaped holes.

“And did you know,” he said to my eight-year-old daughter, “that Jesus loves you?”

She peered at him through her red hair. “Yeah?”

She giggled and looked up at me, as if needing permission to drink in these words.

“And you,” he said to my kindergartener son. “Did you know Jesus loves you very much?”

“Yeeeeeeees,” he said, delighted while implying it was a silly question. I mean, they heard this at church all the time.

But this was different. This was new.

Even my tween daughter, outraged these days by the utter lameness of the planet earth, looked to him for her blessing. “Did you know Jesus loves you?” he said.

“No matter what happens, whatever in your life, don’t forget that.”

I turned the tiny cross in my hands. We had just come off the World Vision debacle, when pundits had drawn so many lines in the sand so quickly, we were no longer a church but a dust storm. Now Noah was out, with its attendant proclamations about seeing or boycotting the film. Memes and passions flared, and while that was all understandable—even necessary for healthy discourse—I wanted nothing of it now. I wanted this guy to lavish pennies on the world, tell all of us we are loved, make old women cry.

My Pringle-throwing children, constantly caught doing wrong, had been beheld as God’s poiemas by a stranger who delighted in them just for being alive. And I believe if I had curled up next to his dog and confessed a week’s worth of darkness, he would have closed my hand around those pennies and hugged me, eyes sparkling.

Love can be so simple sometimes, it’s almost impossible to grasp.

As we crossed the parking lot, I noticed my kids had left the door to the visitor’s center open. When the man came out looking for his prodigal dog, I immediately began to scold them. But he gave us a nod, smiled, and waited patiently for his dog to bound out of the bushes. Then they headed back inside, the man whistling, riches of miniature crosses jangling in his pocket.

This post originally appeared at Good Letters on April 28, 2014.