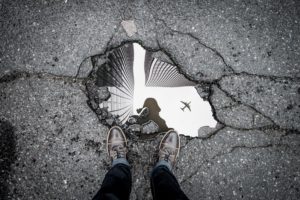 If you can keep your faith once you’ve stopped using prayer as an attempt to control the universe, I reckon your faith is real and can be trusted.

I was on the plane to California the first time I recognized that my religiosity might be a form of superstition, and in that fashion, also a form of arrogance or an attempt to manipulate God.

Almost everyone is a little bit religious at takeoff. People subtly making the sign of the cross, closing their books and their eyes, breathing more deeply, until the plane reaches cruising altitude.

I was in the habit of saying the Rosary every time I flew, sometimes to ask for safe travels. Sometimes because if those should be my last moments of life, it seemed God might be pleased to find me praying. But sometimes it was because I had a system, one that seemed correlative with safe travels in the past.

But I was feeling a little burnt out the last time I flew, a little angry. And weirdly, I decided, very intentionally, not to pray at takeoff, or at all.

I’d been teaching religion on Sundays to a class of sixth graders, also doing hospitality for a monthly adult education program, and serving on several church committees. It was the sixth graders who made me angry.

All the other activities provided a sense of affirmation, knowledge that I was pleasing others, making my priest appreciate me, accomplishing activities that could be marked as a success in the course of an evening.

But the sixth graders didn’t want what I was offering, which was an hour at a desk every Sunday, reading abridged Old Testament tales from a garishly green workbook. They did everything they could to prohibit my efforts, from slithering out of their seats and sometimes out of the classroom, to subtly perverting my words under their breaths so that I stood before them, an object of ridicule.

There’s nothing quite so perverse and politically incorrect as a middle schooler’s sense of humor, and I struggled with desiring the children to come to Jesus while also internally damning them to hell.

I was ready to give up entirely by Thanksgiving. Church work ceased to feel like an accomplishment. I stopped caring if my priest liked me, if I was making a difference.

I could not make the children respect God or me, or each other, and it provided no escape or relief from similar problems at home.

I’d hit the brick wall too many times. My prayers felt ineffective. Maybe I was throwing a little tantrum, but I had arrived at the holy hell of not giving a shit about any earthly thing.

I stopped praying, not because I stopped believing in God, but because I had stopped feeling like prayer was a useful way to get what I wanted—which was for everyone to shut up and listen to me.

I’ve tried to write about this before, how our whole relationship with God depends on pursuing God alone. We want to wait on community, on spouse, on the right programs. But what we need is the passion to go alone into the silence, like Jesus who suffered in the garden alone after asking his disciples to wait with him. They fell asleep. You cannot count on anyone being there in your time of need.

I was learning that I needed to go alone because no one else in my immediate vicinity wanted what I wanted.

At that particular moment, my husband and I agreed on nothing. There was no pathway to communion for us but the sacrament of bread, though we were tied together for eternity by the sacrament of marriage, bound and connected by the ways God bound himself to us.

Like the Israelites, we wandered in our desert with nothing to eat but this bread with a hint of sweetness that soon became cloying and tiresome because it was only a hint, without satisfaction.

It is hard not to think of God as a trickster in such times. So many promises! A chosen people! Fathers of nations! How many souls were yielded to the dust from the time of God’s promise to Abraham and its fulfillment in Christ? How many souls turned to dust after filling their tiny parenthesis in the story?

This was my prayer: “Fulfill your promise Lord!”

Obed-Edom kept the Ark of the Covenant in his home for three months. He was not struck dead like so many before him. In fact, he received God’s blessing. And then David recovered the ark and danced “with abandon” so that it scandalized the slave girls. Saul’s daughter Michal reprimanded him and her reward? Childlessness.

Who can read the Bible and not become a nihilist? Does nothing matter—nothing but the obnoxious and lewd glory of God?

I was concerned about an intentional decision not to pray. But there was a necessary disillusionment underway. I cannot fly the plane with my Rosary. I can’t pray my way into an easy safe life. I cannot count on a very real desire to love and serve God to yield any countable fold.

What a free fall. What a cosmic ball-breaker—the awareness that I do not get to shape the personhood of any other individual on the planet, not even my own children. My attempts to control, confine, micromanage, and keep them safe were turning me into a narcissistic dictator—diametrically opposed to the image of God.

It wasn’t that I really didn’t give a shit, but that I was recognizing that my giving-a-shit didn’t save. It’s an important distinction.

God saves, but not necessarily by providing safety and shelter. God saves by showing you the reality of who you are, the reality of your powerlessness, the reality of the dignity and freedom of others, including their freedom to choose a life that doesn’t include God.

My prayer cannot be a beaded weapon aimed at every outcome I want to control, but rather a total melting of my self and my will into God and God’s will.

Truly there is little worldly comfort or satisfaction in such a prayer. I may as well throw my arms up and dance with abandon.