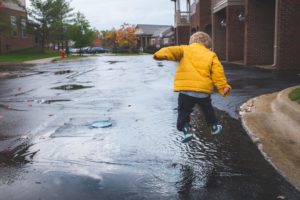 The Welcome Wagon’s Vito and Monique Aiuto released their first album, Welcome to the Welcome Wagon in 2008. The homespun effort was produced by Sufjan Stevens and was lauded by outlets as diverse as Pitchfork Magazine (the ultimate indie bible) and Christianity Today.

Known for their endearing, lush, and earnest combination of indie-folk hymns, low-fi pop covers, and often revealing original songs, Welcome Wagon’s third album, Light Up the Stairs, was released in 2017 after funding from Kickstarter.

I met with Vito Aiuto—poet, musician and pastor— to chat about words, music, preaching, and human nature.

Mary McCampbell for Image: I read an article where you were talking about David Foster Wallace’s “E Unibus Plurum,” and like Wallace, you have said that you are tired of irony and sarcasm and want to make music that is almost embarrassingly sincere.

VA: Yes, I do. And I do hate irony and sarcasm.

Image: This relates to the spirit of play and almost childlike earnestness in some of your songs, even in Monique’s voice.

VA: We have had a couple of people say that we should really make a children’s album. But it actually already is a children’s record. There’s a glockenspiel, and it’s sung by a woman who sounds like she is twelve. A lot of the arrangements are super playful; there’re lots of horns. And so many tell us that their kids love “Oh For You Who Fear My Name” because it’s a stomp and clap song. When we recorded it we were stomping and clapping.

Image: Why do you gravitate towards the childlike elements in your music? How intentional is it?

VA: I don’t think it is intentional. It makes me think of Sufjan a little bit. He has a way better sense of humor than I do. I take myself way too seriously. He arranged the songs on the first record, and I played in his band for several years. And one thing I think he learned from Daniel Smith is that this is kind of like theater. We’re putting on a show, and it’s fun, and we’re all kids.

VA: The first tour I ever did with him, he made us all wear Boy Scout uniforms. The name of the band was Sufjan Stevens and the Michigan Militia. And he’s got all these beautiful, wonderful songs and in my mind, I’m thinking, “You’ve got to take yourself seriously—these are serious, introspective songs.”

He has constantly provided a discordant note, and I think it has made his art better. So I’m going to sing this very poignant, heartbreaking song, and I’m going to do it while wearing a bunch of feathers all over my body—which is what we wore during the Seven Swans tour. He’s helped me to learn to play a little bit because I want to be serious.

Image: In your music, you talk very honestly about the complexity of both fallen and glorious human nature and how that looks in relationships with God and others.

We also see that in “It’s So Hard” when Monique sings “You can win the fight; you can prove I’m wrong and not be right.” There’s such honesty about human nature and the difficulty of relationships.

You have to hold those both in tension. That’s what I thought you were talking about in that Christians have the best view of human nature.

We are made a little lower than the angels, made in God’s Image, and we’re Jesus’s younger brothers and sisters. We are also desperately wicked and do horrible things to each other and ourselves.

VA: So I like to think about and sing about those things because those are both realities in my life.

People have been really kind to me, and I have been able to participate in the best parts of human nature. I’ve also hurt people and been hurt by people in really dreadful ways.

One of the first things I read when I became a Christian was The Cost of Discipleship. I had been a believer for like a month, and somebody gave me this book to read. And I loved that he begins by talking about “cheap grace,” by saying that this is a matter of life and death. If you don’t take this very seriously, you would be better to get out.

I mean, I am wildly extrapolating from what he said. But I was just so glad that this was not the “Be Happy Attitudes: How to Love God and Get Along in Five Easy Steps.” Instead this is the guy who had the biography to back up the fact that this is a matter of life and death, that you are going to die, and that this is the most important thing.

I like to sing about things that I take seriously. Yes, there are going to be comedies, etc. but even the best comedies are about the essentials of human nature. How can it be that humans are so great and wonderful and beautiful? And how can they be so vile?

Image: Is that why you chose that particular Donne poem (Holy Sonnet XIX)—because he focuses on “two contraries meet in one”?

VA: Oh, for sure. That can be any Christian’s song. It’s a total Romans 7 thing. The real reason I chose that was because of the last line “Those are my best days when I shake in fear.”

Unfortunately, that’s when I make the most spiritual progress, when I am the most scared, the most depressed, the most shocked, or the most hurt. Otherwise I just end up sort of sleepwalking through my own life.

Mary McCampbell is associate professor of humanities at Lee University and winter/spring 2018 scholar-in-residence at Regent College. She writes on literature, film, and music and is currently working on a book titled Postmodern Prophetic: The Religious Impulse in Contemporary Fiction.