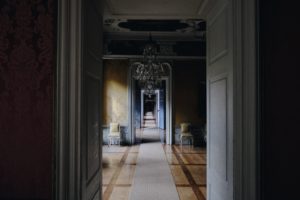 My house has doors built for death.

When my husband and I first bought it a year ago, I won’t say I fell in love with it, but it felt like a place that could become a home.

Built in the 1850s, the house has narrow stairways that appear in unexpected places and steps that creak and bend from more than a century of foot traffic. Two different colors of circus-striped wallpaper cover two of the bedrooms in a strangely charming way. The previous owner restored the old wood of doorframes, built beautiful hearths, and remodeled the kitchen.

But it wasn’t long after we moved in that I began to wonder about the doors. The door by the garage seemed the most logical choice for a front door so we placed our garden statue of St. Francis to welcome visitors. But there were two other doors on either side of our L-shaped porch—each with three steps leading up to it—that confused our visitors.

We started finding packages delivered to each porch door and knocks rattled across the house so that I wasn’t sure which of the three doors a guest had decided on in his or her confusion.

“What a strange thing, to have three doors,” I said to one older guest who’d grown up in the area.

“They’re built for wakes,” he said. “To keep the line of people moving, from one door to the other.”

Doors built specifically for wakes? I was fascinated by the idea that bodies had likely been prepared and laid out in our dining room. It might be folklore that those doors were built for death but it wouldn’t be unreasonable to think so.

When our house was built, traditional funerals were simple affairs: loved ones often died at home rather than in hospitals and their families cared for the body.

Typically, the deceased was clothed in a simple home-sewn garment, washed and groomed by family members, and laid out in wooded coffin in a family room that was kept cool. During the wake, friends and family would file through the house, paying their respects to the dead and supporting the family.

Sometimes a woman would sew her own death shroud.

This unflinching approach to the end of life, to even plan ahead for it with architecture and shrouds, is so foreign to us used to outsourcing death. We purchase everything from flowers to caskets and vaults to funerals and graveside services, and are left not only with our grief, but often debt.

I’ve seen this in my study of the ancient mystics, who lived close to death and often focused on it to an alarming degree. Catherine of Siena longed for martyrdom with nearly every prayer on her lips.

St. Francis—who had seen so much death from war and disease—wrote a prayer of praise near the end of his life to his beloved “Sister Death.”

And then there’s Julian of Norwich, an anchorite and mystic in fourteenth century England. Many scholars believe Julian probably lost a husband and at least one child in the Black Death epidemics. The plague likely decimated not only her family but her community as well.

Veronica May Rolf’s An Explorer’s Guide to Julian of Norwich reminded me what an anchorite’s vows entailed: to be cut off from the rest of the world. Julian lived the rest of her life in a small cell (or anchorage) attached to a church, a small window her only connection to the outside world.

Not only that, but in the ceremony that declared her an anchorite—the “Rite of Enclosure”—a Requiem Mass was performed.

During her Mass for the Dead, Julian was administered the last rites and then locked away in her anchorage, not to be left “under pain of excommunication.”

In her anchorage, Julian chose to embrace death further, to meditate on the gory details of Christ’s death, and to participate in his sufferings. She endured near-death illnesses that brought spectacular visions and revelations about God’s goodness and love.

Like the mystics, the people I know who are the most open and honest about death have often seen and felt it over and over. Or they, like the mystics long for God in a way that breaks down the fears that we harbor about death.

When my husband came home from a funeral recently, we talked about what wakes might have looked like in our home.

Suddenly, he got excited, almost giddy: “Will you do that for me?” he said. “That would be so cool. I mean, yes, it would be sad because I would be dead. But it would be better than a funeral home.”

I pictured our old death doors propped open for a steady stream of mourners and comforters. I saw my husband laid out on our kitchen table, cold and pale, still in his youth. I cringed.

I told him I would do it for him but I hoped it would be many decades from now, when he and I are old and grey.

I have to admit that I’m not quite a mystic yet.