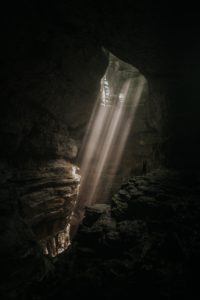 To reach the mouth of Mammoth Cave’s historic entrance, we made a short descent into a wooded ravine along a paved path. It was a humid day, but cold air poured out of the cave, creating a ring of mist that circled the dark portal like a gate.

The further in we traveled, the colder it became. Faint yellow lights lit our path; the occasional floodlight illuminated patches of irregular stone wall.

Tourists have walked these paths since before the Civil War; the first tour guides were slaves. Our ranger, a geologist, claimed that, during the war, soldiers from both armies would vacation there—at the same time. It sounded fanciful, yet when we emerged into the Rotunda, a huge circular underground hall, it felt more plausible.

Forces more subtle yet more powerful than us had been at work in this place. It was here before us; it will be here after us. In a place like this, you might imagine our common smallness would bring us together.

Only weeks earlier the whole world watched the difficult rescue of the Thai soccer team stuck in a flooded cave. It was a nightmare scenario that momentarily connected us all to children who were not our own. Their rescue required grit and ingenuity to maneuver where our fancy machines were helpless.

Of course, some people asked what they were doing there in the first place. It’s a familiar form of denial when facing the irreversible—fantasizing other options, recalling moments when we’d considered a path that would have led elsewhere.

Sure, they were unprepared for something going wrong. Going into caves is always a calculated risk, and they lost on long odds. But it’s beside the point to blame them. Caves, like rivers and mountains and canyons, call to us, beckon us inside, invite us to place our bodies in direct relation to them.

The first humans explored Mammoth Cave some 5,000 years ago. Using only bundles of burning reeds for torches, they ventured deep inside and scraped the walls clean of gypsum.

We’re still not sure why.

Our oldest art lives on in caves. Early humans walked into mountains and carved their marks, perhaps dreaming that people like us would find them in some unimaginable future and think, for a moment, about the makers of the marks. These drawings feel primitive but also primal, essentially human. They have such a hold upon us that we even have LEGO art of the Lascaux Cave horse.

And art continues to return to caves for inspiration. Gilgamesh passed through a cave. The Greek heroes used them to drop into Hades. Werner Herzog made a documentary about a single cave. As a quest given her by Zeus, Wonder Woman passes through Doom’s Doorway, a portal inside a cave, to battle beasts and discover her true origins and purpose.

Caves are portals both within and beyond. They are tombs, catacombs, and wombs of new creations. The darkness from which we discover the light.

My favorite has to be the Batcave. Even in the comic 1960’s version where I first encountered it, it was fascinating. Not just because it is the base from which Batman puzzles over each new case, or because it holds the coolest vehicles and tech in the world, but because it’s still a cave. It retains its primal energy in a way no Hall of Justice, Fortress of Solitude, or villain’s fancy underwater lair ever could.

Minerals ride droplets of water down the walls and stalactites. Bats sleep in its deeper recesses. It echoes with the voices of ancient wanderers who also, perhaps, pondered mysteries in the cold and dark.

The West’s most famous cave is Plato’s. Always one to both demystify and re-enchant, Plato flipped the script on the cave. No longer a portal to the supernatural, it became the image of a prison from which the soul must escape into the light of Goodness, Truth, and Beauty. Philosophy is the key, and the ladder, and possibly, too, the dark glass to shade our eyes from the light of the sun.

David L. Carlson, in The Hunting Accident, makes explicit the connection between Plato’s cave and Dante’s journey through hell. Matt Rizzo, blinded in a robbery gone bad, ends up sharing a prison cell with Nathan Leopold, and Leopold takes him on as a kind of project, trying to convince the erstwhile pseudo-gangster of the beauty of art and the pleasures of the life of the mind. Rizzo emerges from his private hell to become a poet in his own right, repeating the story of the journey to the light.

Even the legend of the Seven Sleepers marries the darkness of the cave with the light of truth. Sentenced to death by the pagan emperor Decius, seven Christian men were sealed in a cave. One-hundred fifty years later, a landowner unseals the cave and discovers the seven men, still sleeping. They wake up and learn the empire is now Christian, but there’s a heresy denying the resurrection of the body—a heresy combated by their own story.

Donne refers to this legend in “The Good Morrow” as a way of contrasting life prior to meeting his beloved with the new life dawning upon him with the rising sun. Love as resurrection, as emerging from a long slumber in a dark cave.

And of course, Love did emerge from a slumber in a dark cave, replaying and reaffirming the myth, consecrating the myth as the true story about our destiny.

It would be lovely if I had some such epiphany from my brief sojourn under the earth, but I was among a tour of fifty people, with my family in tow. My wife and I had to keep our eyes on the kids, keep checking if they were warm enough. When we climbed out, we had to walk through a foot bath of soap and water to protect the bats from white-nose syndrome. Then we climbed up the hill and several stairs, from the dry cool to the damp hot, sweating now and carrying our hoodies. When we reached the summit, we bought ice cream.

">Brad Fruhauff is a film buff, comics nerd, literature scholar, editor, and writer living in Evanston, Illinois. He is Senior Editor at Relief: A Christian Literary Review and a Writing and Communications Specialist at Trinity International University where he also serves as Contributing Editor for Sapientia. He has published poems, essays, and reviews in Books & Culture, catapult, Christianity and Literature, Englewood Review of Books, Every Day Poems, Not Yet Christmas: An Advent Reader, Rock & Sling, and in the newly released How to Write a Poem.