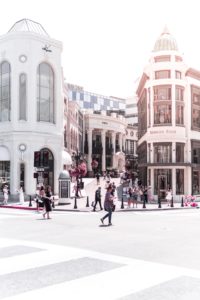 Many years ago now, not long after I had been received into the Orthodox Church, I had a dream that has remained vivid: The Divine Liturgy of St. John Chrysostom, our chief celebration of the Eucharist and main Sunday service, is being celebrated right next to the escalators in a Neiman Marcus store.

In the dream, there’s a square plot of carpet outlined by velvet ropes, and inside two priests, long-haired and long-bearded, are doing some of the works of worship—at this point chanting prayers, and swinging golden censers back and forth.

But instead of incense, the scent being borne over the air conditioning is the collective blast of perfumes arrayed in the glass display cases on either side of the, ahem, temple. The escalators crisscross and roll on their courses, up into the air, bounded by their glittering plate-glass railings.

It is a navigation that I am still contemplating all these years later, and most specifically in terms of how to celebrate the Sabbath.

Yvette Alt Miller’s wonderful book Angels at the Table has given me a lot to think about. Miller is an Orthodox Jewish mother—a ba’al teshuvah, as newly observant female Jews are known—a teacher, and a Harvard graduate with a formerly aggressive business career. Angels at the Table is a meticulous explication of the meaning, mechanics, and beauty of the extremely structured (some would say stringent) way that Orthodox Jews remember the Sabbath to keep it holy.

Now, as a Christian, I well know that our faith’s approach to the third commandment is fundamentally different from what Orthodox Judaism espouses—and cannot be otherwise, given our understanding of Christ being the fulfillment of what so many Hebrew scriptural observances looked toward.

We are not held to those traditions, exactly—the Sabbath was made for man, and not man for the Sabbath, after all. Lauren Winner discourses thoughtfully on the differences in celebrating the day of rest as a Jew, and as a Christian, in her book Mudhouse Sabbath.

And yet Jesus said, “I did not come to abolish the Law and the Prophets.” The Puritans conducted their own fierce abstinence from labor. My daughter’s Greek godmother often wishes she could return to the blue laws of Astoria, New York, in which everything was closed on Sunday, rather than being stuck for an hour in traffic on Route 7 in Northern Virginia.

For it is a real battle these days: not being overwhelmed and bowled over by the “bleared, smeared” workaday world. And if you are trying to raise children to have some memory of faith, with even the hope of an adult commitment, you have to work at it mightily. The soccer game will just have to wait.

And this is important: Judith Shulevitz once wrote that God gave man the Sabbath as a reminder, and a celebration, that the Jews were no longer slaves. To neglect the Sabbath was therefore to voluntarily remain a slave.

Angels at the Table goes one step further, illuminating beautifully not only why certain activities are not done on the Sabbath, but what not doing them frees you for: In-depth conversation with family. Hospitality. Long walks. Gazing at the sky at dusk to espy the three stars that signal the end of Shabbat.

This is not merely matter of a “day of rest,” that casually tossed about phrase, but a day of worship. A day of ecstasy, even, as the Hasidic Jews would have it.

Slowly, slowly, I am trying to ensure fewer distractions on that day, even if I am not commanded to keep Shabbat. I do not want this to be a day of errands, list-making, paying bills, of cruising by Lowe’s to see the weekly deals, or a day of watching television cartoons, which was the major lure when I was a child.

While I don’t mind my children being bored, I don’t want them to be exasperated and miserable, either. Alt Miller has ingenious suggestions for making certain toys and activities “Shabbat only,” and therefore instantly special.

We are somewhere, right now, in the middle: We wake into silence, and each week, I am delaying turning on the radio, although that is hard because my union-contract husband, who has to work on Sundays, is in broadcasting, and I want to be “with” him.

I resist the temptation to just put a load of clothes in the machine and notice instead the stream of sunshine through a window.

We light incense and cense the house, but I often let my son, who has been forbidden computer use during the school week, to play a few games. We have to get in the car to drive to our church, which is a full half-hour away from our house on yes, the Washington, D.C., Beltway.

Yesterday, though, while waiting to attend a friend’s Sunday dinner on that side of town, I fell into the kind of habit that plagues almost all of us contemporary Americans: Wanting something casual to change out of my church dress into, I found myself parking the fabled Montgomery Mall, now a Westfield center.

“What is a mall, Mama?” my four-year-old daughter asked—while she’s been to one a few times, we’ve tried to avoid recreational shopping.

Once inside she was clearly entranced by the abundance, hands running over skirts and blouses as she ran between the racks. After I have picked up a twenty-dollar sundress, we find ourselves selecting among the plethora of Hello Kitty sundresses one for my daughter, too.

She runs up to the mannequins, which she calls “the pretty ladies.” She kisses each one of them in turn, as if kissing the icons at church.

This post originally appeared at Good Letters on June 5, 2013.