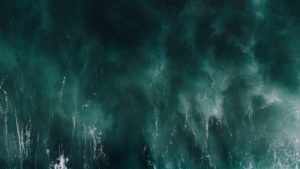 On July 24, an orca calf died off the coast of British Columbia within thirty minutes of birth and Tahlequah, the calf’s mother, carried her dead daughter on her rostrum, pushing her through the Salish Sea from Canada to the U.S. and back again in a funeral procession that logged a thousand miles and lasted seventeen days.

The Puget Sound region, and soon the world, watched in grief, horror, and helplessness as Tahlequah’s ordeal made daily headlines, noting that at first her family swam slowly by her side, keeping vigil. But later they reported days when she visibly lagged behind, and other days when, due to poor visibility, there was no sign of the pod at all.

Moving to the Seattle area six years ago, I became captivated by the Southern Resident Orcas, as they’re dubbed, attending educational events, following their movements on a Facebook page, and trying to spot them whenever they swam well south into the Sound.

I was among those who wept after the news of Tahlequah’s calf and her grief, sharing in the heartbreak and feeling my complicity in the precarious future of these seventy-five endangered fish-eating orcas who stay with their mothers their entire lives. This iconic species is starving from lack of salmon, drawing instead on their toxic blubber for the energy to navigate marine channels ringing with ship noise and naval blasts that jam the whales’ own sonar, inhibiting their communication and hunting abilities.

Survival is fraught with peril, and mothers lose their young at alarming rates in the animal kingdom, and usually I console myself with the idea that it’s all part of the circle of life. But here was a circle of death: this neonate orca and others that’d undoubtedly slipped from their mother’s wombs to the bottom of the sea since the Southern Residents’ last viable birth in 2015; the loss of their 105-year-old matriarch, Granny, in early 2017; and young Scarlet, the sick and starving three-year-old wasting away while humans develop plans to help her.

On August first, a week into her vigil, I picked up my journal and wrote to Tahlequah:

The depth of your love and the depth of your grief are unfathomable; and I am terrified you’ll be undone by it, afraid that we will watch, helpless, as your strength gives out. Your mourning is so very powerful and so very public that our private grief is carried with you and your daughter. We look to you—no we beg of you—to swim through this sea of sorrow and emerge somehow. We pray you’ll find a way to give up your daughter to the dead, but not give up on your own life. Without you, there is no hope for us.

Three days earlier, I’d received news of a twenty-nine-year-old friend who’d needed an organ transplant and had married his love by filing paperwork (without even a celebration) in order to be considered more “worthy” of lifesaving. His new wife, now widowed (without even a ceremony) had made the terrible decision to withdraw life support after he suffered a brain hemorrhage. Like Tahlequah’s family, parents and friends gathered as she plied the waters of loss.

Another friend, a thirty-eight-year-old husband and father who seemed healthy in November, was diagnosed with aggressive cancer in December. His body took leave of this world on August 6, before his mind and spirit were ready. His wife and toddler daughter were plunged into private mourning while every day the news carried stories of Tahlequah’s unprecedented tour of grief.

During those days a mother I’ve never met keened as she rocked her dying child in a hospital room. She may have walked through the valley of the shadow for weeks, or rushed in behind an ambulance only minutes before. Somewhere else another mother carried flowers to a grave, pressed her body into the hot grass, and prayed for the impossible.

Loss has swirled through my life as I’ve grown older, but the severing has always been once-removed: my grandparents, not my parents; my husband’s siblings, not my own.

Waiting and worrying what would become of Tahlequah and my dear friends, and doubting my own capacity to live through such devastation, part of me held my breath, as though submerged, swimming with Tahlequah’s pod, and in that wavering depth these words emerged:

This is the undeniable truth: we all swim dangerously close to the shoal of death, and one day it will claim us. Be tender, then, with each other, gentle in word and deed. Our lives are so fleeting, we are so fragile—our only recourse is to love one another in the midst of pain.

On August 11, Tahlequah was spotted in the waters off San Juan Island without her calf, for the first time since its birth and death two-and-a-half weeks earlier. She surfaced in view of Ken Balcomb, founder of the Center for Whale Research, who has studied these whales for decades, who knows them as intimately as a human can. She looked, “remarkably frisky,” he said, as she chased a school of salmon.

Tomorrow, twelve days after Tahlequah surrendered her daughter to the water, I will hug a thirty-five year-old widow, her two-year-old daughter, the widow’s father dying from cancer, and the widow’s faithful mother stretched thin by caring for them all, as we gather at a waterfront park to remember the young husband who should not be dead, but is.

Today, as I write this, the sky is steel-toned thick-choked with ash from wildfires and everyone’s been warned to stay indoors. The sea outside my window is equally opaque and grim, and the future inscrutable. But in this moment Tahlequah is plying the Pacific alongside her son, mother, and pod, unseen by human eyes.

Somehow she has survived this calamity. And she is not alone. In this moment there is hope.

May it be so tomorrow.

Cathy Warner serves as Good Letters literary editor. She leads writing workshops, renovates homes, and sells real estate in Western Puget Sound. Author of Burnt Offerings, Cathy has been nominated for the Pushcart Prize and Best American Essays. Her writing has appeared in dozens of print and online journals and several anthologies. Find her at cathywarner.com. Learn more about the plight of the Southern Resident Orcas here.