But by the time my father had lost his skunk-patterned hair and his fingernails yellowed, I had already found more trappings of eternity in poetry than in personified abstraction. It seemed to me that the only correct response was a slow-burning rage in which god, or an idea of one, did not factor at all, let alone anxieties about big-B Belief, a fact my father would probably lament but also understand.

On the day of his funeral—held at the same church in which holy water maybe beaded atop the head of Tricia’s casket—the dolorous organ seemed to enter me and vibrate within, as if trying to wake a part of me I’d long ago released.

A few weeks ago I saw a hummingbird on my back porch for the first time. It hovered in front of me, just a few feet from my face, as if it desperately wanted to be noticed. I get it, I said aloud. And then I gasped, because it really was so beautiful, shiny and…

Every December and May at commencement, I listen to the names of our graduates as they are called out one by one. As I hear them, I think, maybe? Could be. Has to be! How did I not get to know her? Yes, I know him. Yes, I know her. They’ve come to my house…

My oldest daughter’s was gifted a butterfly garden for her 3rd birthday. We watched the six larvae plump up. Then each formed a chrysalis and after a few weeks all emerged as beautiful, painted lady butterflies. We fed them watermelon and pineapple and when the day came for release, I wasn’t sure my daughter would…

On July 24, an orca calf died off the coast of British Columbia within thirty minutes of birth and Tahlequah, the calf’s mother, carried her dead daughter on her rostrum, pushing her through the Salish Sea from Canada to the U.S. and back again in a funeral procession that logged a thousand miles and lasted… 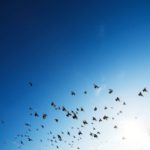 But a plea, that upward to Heaven he flings —Paul Lawrence Dunbar, “Sympathy” I first read Maya Angelou’s I Know Why the Caged Bird Sings when I was thirteen. I discovered the book through an interview with Fiona Apple, one of the many female singer-songwriters whose mournful lyrics poured through my boom box speakers while…

My favorite film from last year is a farce. Paul Thomas Anderson’s Phantom Thread functions like a twisted screwball comedy: Its momentum is the back-and-forth seeking of the upper hand in the relationship between Reynolds Woodcock (Daniel Day-Lewis) and Alma (Vicky Krieps). But narrative momentum does not always move the viewer. Anderson’s films can be… 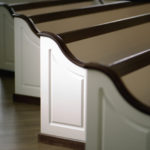 I once met a beer-guzzling goat like the one in Wiman’s poem. His name was Clay Henry, and he was elected the honorary mayor of Lajitas, Texas in 1986. But my deeper resonance with “The Preacher Addresses the Seminarians” lies in my identity as a seminary dropout who backdoored his way into the preaching life.…

I love the broad strokes and sweeping vision of this poem at the same time as I appreciate its specificity, its impressive attention to detail. The forces of good and evil that make up the archetypal beams of this poem create a kind of structural backdrop against which the poem whirs and sparks— from the…

When my sister first told me about Orangetheory Fitness, I was intrigued. “You’d probably dig it,” she said. “It’s like personal training, but in a group.” Admittedly, it did sound like something I would like. But I was the heaviest I’d ever been and had spent the last three years committing myself to a level…