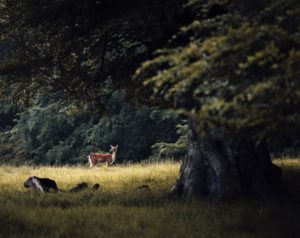 Last night, as I walked on the road that leads me home, I saw a deer sitting in the meadow.  The moon was out, and the few stars not clouded with the glow of human endeavors kept their lights unmoving in the endless sea of almost darkness.  The deer sat there, away from the road, away from the forest.

Though I did not mean to, my feet carried me off the path, away from the lamps that tried so hard to hide the night, and I went down into the meadow.  I slowly walked toward the deer, but it sat still, unmoving.  The grass beneath my feet was soft, inviting, and the dark, living stillness of the meadow filled my heart with peace.

I was gone, finally, away from all the day’s running. I sat down, and let the night envelop me.  My ears drank in the songs of praise, a hundred crickets lifting up their voices, and the deer, not twenty feet away, listened with me.

A voice inside me whispered: “He makes me to lie down in green pastures… He restores my soul.” For a long time we sat, no one but me, the deer, and the One whose presence gave us life.

I did not see the deer get up.  But I watched as it walked back and forth, first one way, then the other.  It stared into my eyes, questioning my presence, and I began to wonder what it saw.

I sat there, and did not move from the shadows. The deer took two steps toward me, then stopped.  It was close enough I could almost feel it breathe. I knew I should look away, but I did not.  My own eyes shone back.

An insect crawled up and down my back, and mosquitoes, ever loving the sweet smell of my blood, began to hover dangerously near, multiplying the number of welts I longed to rub with the fresh leaves of clover growing near my hand.

But still I kept my vigil.  The deer lifted one leg and let it fall once more to the earth.

I sat there still, watching the deer, in awe of its Creator.  The deer had turned from my gaze, and once more took a few steps toward my left, then turned again and slowly, step by step, made its way toward the road.

A lamp watched over the street, stretching its circle of light toward the meadow. As the deer entered this new domain, it stopped to take its fill of the grass underneath its feet.

Someone rode past then, whether on a bike or a car I do not know.  All I remember were the tears I heard in the voice of the deer as it ran from the sites of human life.  It was the first time I heard a deer call out.

I sat there still, gazing up at the line of trees where the deer had disappeared, watching the stars, still unmoving in their cold, heavenly reign.

The stars of the earth cast a warmer glow, flitting about in short pulses of light as they searched for love among their kind.  After a time, I could see two other stars, alive inside the eyes of the deer, far off on the end of the meadow, still watching, but coming near once more.

It moved in front of me again, but as it neared, my once still heart wrenched within me, and as it looked into my eyes for one last time, my whole form grew rigid as I remembered the sound it had uttered, the fear that lived inside its own heart. I looked away.  It was scared now, and I knew it.

I did not look into its eyes again, but I sat still as it warily watched me, slowly pacing back and forth until it once more moved toward the light.  I kept my head down, hoping, praying it might be able to pass.  But it did not like my stillness.

A man walked down the road, but I was not aware of his approach until his footsteps died away. I still looked down, feeling only the movements of the deer.

The sounds of a car drifting through the night slowly reached my ears, and I dared to lift my head. The deer looked up. Once more it lifted up its voice, and I knew—or was it only a feeling?—that I was the one who had made it cry.

Patricia Dawson is a graduate student in history at the University of North Carolina at Chapel Hill.