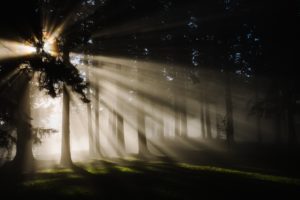 “You OK?” my husband Craig touches my hand, looks at me.

We’re in the car, Sunday evening, driving home. Something shifts inside me, like sand.

This experience of having him check in with me is new. After almost fifty years of practice, I’m so used to saying fine that I don’t always feel what I’m feeling until hours (or days) later, when I wonder why I’m cranky or weepy or anxious.

Two years ago, after driving Craig past my childhood house, showing him the walk home from the school bus, the bank of madrona where the imaginary creatures lived, the moss where I played with sticks, my father’s roses along the brick path to what was once our front door, he asked, “You OK?”

Sure. Of course. Fine. Why (a little impatiently) wouldn’t I be?

Then, later that night, I burst into tears at the enormity of having shown him the special places of my childhood, of having him offer up—completely unprompted—how Fern Road looked perfect for elves.

“You OK?” he’s asked on the anniversaries of Mom’s death, Dad’s death, my brother’s death—all of which I mark by lighting, at sunset the night before, a yahrzeit candle.

Sure. Fine. I do this every year.

Until I met Craig, I was used to getting through emotional states on my own. Sure, I cried on friends’ shoulders and balled up many Kleenex in therapists’ and priests’ offices, but I steeled myself against how deeply I could be affected, even when I already was.

This Sunday, Craig and I went to his mother’s. We drove the scenic route, up past the estuary and rain-swollen creek, through the redwoods and blooming ceanothus and rampant French broom, over the crest at Alice’s Restaurant, and down into Silicon Valley horse country.

Then, in concession to my carsick-prone constitution, we took the freeway the final ten miles. One of the exits we passed was Edgewood Road. I’ve driven by many times since Thanksgiving Day 1992, when I took it to visit my brother at Redwood Center, a residential drug rehab facility.

I can’t recall what sent Blake there—a court order, one too many drunk driving arrests, an alternative to jail time—but I do remember the relief I felt at seeing him, for the first time, take recovery seriously. Or, as he put it that Thanksgiving Day, “I finally get the powerless thing.”

In the twenty years since, passing Edgewood Road prompts in me an association. The past is all around us, right? That’s just the way it is.

This Sunday is no different, and I mentioned Redwood Center as we passed Edgewood Road and then took the following exit to Craig’s mom’s for spice cake and coffee.

It is dusk when Craig and I pull out of her driveway, and at the first signal, he asks me, “So you want to try to find it?”

We drive past old Victorians with wrap-around porches, gracious late nineteenth-century houses on large lots with broad-canopied trees and rampant roses. We cross a street named after fleas, and the houses get smaller, the yards shabbier. Soon there are only trees on one side, oaks and laurels, and the freeway up ahead.

Craig makes a right turn and I say, “This doesn’t look right.” In front of us splays a subdivision where I remember raw hillside.

“These houses weren’t here twenty years ago,” he says, and takes the next left.

My stomach tightens—something in the light falling through the trees—and then the car takes a gentle bend and there it is. Directly ahead, behind a chain-link fence and closed gate, sits a low single-story building looking abandoned.

No Trespassing has been posted, and overgrown bushes partly cover the wooden sign on which someone had carved, then painted, Redwood Center.

Tears run down my face. “I’m sorry, I didn’t know this would happen.”

“I’d have been worried if something like this didn’t happen.” He kills the ignition and pulls the brake. We get out of the car.

When someone you love has been gone as long as Blake has (nineteen years), you get used to the loss. The novelty—and the searing pain—wears off. Grief never goes away, it’s true, but it attenuates.

And then you find yourself smack dab back in the place where your drug-addicted brother is clean and sober and full of hope. Where you and he talk honestly for the first time in years. Where you laugh and cry and leave him, waving out the window, with lightness in your heart.

And fourteen months later, when the hope and lightness has been taken away, a grief so raw and jagged you cannot imagine ever again being fine.

“It really seemed like he’d make it here,” I tell Craig through my tears. “I hope some of the men with him did.”

“Why can some do it and others can’t?”

Craig hasn’t had a drink in seventeen years.

The tears start again, hot on my cheeks as I imagine the alternate scenario: coming here on my own, praying, driving away, and telling myself I’m fine.

This day, instead of saying a prayer, I feel prayer all around us. I am amazed at the strength of my brother’s presence, beneficent and healed. I see his grin, his brown eyes, his thumb’s-up at the man at my side.

Craig and I stay a while longer, then get in the car and drive home.

He looks over and touches my hand—“You OK?”

I nod, squeeze his hand back. There’s no need to say I’m fine. This time, I am.

This post originally appeared at Good Letters on May 24, 2012.

Lindsey Crittenden is the author of The Water Will Hold You: A Skeptic Learns to Pray and The View from Below: Stories. Her essays, short fiction, and articles have appeared in the New York Times, the San Francisco Chronicle, Image, Bellingham Review, The Best American Spiritual Writing, and other publications. She lives in San Francisco, where she teaches writing at UC Berkeley Extension and The Grotto. Her website is www.lindseycrittenden.com.